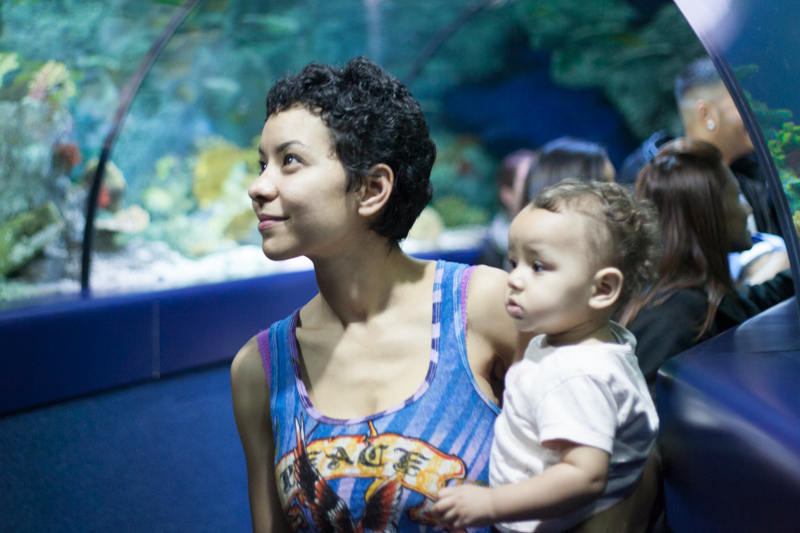 I was a bit tempted to give up this whole project of noting some of the positive little things in our day to day, all because I missed a week. Then I was like, get a grip, Adele. So here’s an attempt at catching up. I’m not going to try to get it all in order. The reality of our lives right now is that everything sort of blends into one.

Bristol Aquarium
We’ve visited the local aquarium twice in the past couple of weeks. First, we went to celebrate Ophelia’s birthday (I know, that girl has had a lot of fuss made over turning one!) then we joined a home ed trip this past Friday with a guided tour.

We went to the aquarium when Talitha turned one as well. With both girls I got pretty emotional seeing how grown up they were in that context. It’s such a great setting for babies with all the light, colour and movement. They love watching fish. On both visits, she’s insisted on getting out of the sling and “walking” around.

I think a repeat visit in this short space of time has been really useful for Talitha as well. She’s keenly interested in fish and the ocean at the moment. They keep coming up in conversation so we’re reading books and watching videos on the subject and she’s been drawing lots around it too.

They’ve somehow become conflated with a newfound passion for the Octonauts and pirates. Frozen is still loved but she now wants an Octonauts party. Her birthday isn’t until June so I’m not getting carried away with plans just yet.

Toddler Wompat
This is such a geeky thing to be excited about but Ophelia is now big enough to fit my toddler Wompat! It’s such a beautiful carrier, it’s exciting to be using it again.

Talitha is not hugely impressed that Effie is using her carrier, though, so I think that’s an excuse to buy a preschooler Wompat, yes? Silly that I have no pic of this yet (no selfie? didn’t happen!) but I’m sure to fix that soon.

It’s surprising that it fits her, though. Talitha was comfortably in my Ergobaby Performance until she was 18 months. I think Ophelia must be huge.

Toddler Takeover
We went to At Bristol Science Centre’s Toddler Takeover two Fridays ago. We’re members but At Bristol gave me a ticket so I took my brother who had some time off work. I’ve really enjoyed seeing him become an uncle. It’s added this whole new dimension to our relationship.

Seeing the wonderful way he so naturally relates to my children has made me so proud of him – it’s deepened my love and appreciation for him. Yup, yup, getting a bit emo here, Liam.

Anyway, we had a great time exploring all the usual exhibits at At Bristol. Talitha really knows the place by now and Ophelia’s starting to want to try bits out too.

Toddler Takeover meant there were extra activities on and Talitha was insistent that we go listen to the storytelling. She made a maraca, put together a sushi roll and relished having an uncle to help make almost an entire house with massive building blocks. The theme of the day was Senses. As always it was intriguing to see the creativity involved in engaging such young ones. I’d love to build a texture garden for Ophelia here at home.

Light – I can see the light!
Talitha and Ophelia have started playing for longer periods of time and I don’t mean Talitha sort of playing with her little sister like she’s a doll or a pet. Ophelia is actually instigating play.

There have been a lot of funny moments (Ophelia biting Talitha’s bottom was an apparent highlight) and they are actually entertaining each other with out me for longer stretches.

Talitha has always been happy to play on her own or look at books by herself for quite a long time pretty much from the time she could sit up. Ophelia has required so much more of my attention and physical contact. It’s brilliant in its own way but a bit intense.

Talitha’s also got to a point now where she is insistent that we must see friends every day. I try to make that happen but I’m hoping that as Ophelia gets a bit older them playing together might make the odd day when it’s just us a bit more acceptable.

Tyntesfield
This is beginning to look like a bit of a “What’s On” in Bristol but we’ve just happened to have a lot of days out recently! We had a home ed history workshop at National Trust property Tyntesfield a week ago.

Talitha is definitely still a bit young for this sort of thing but she got a lot more out of it than I realised at the time. She still finds it funny that grown ups used to use a “potty” in the Victorian era.

It was great to catch up with fellow blogger and localish friend Jess who’s also home educating.

Time with the grandparents
Talitha’s horseriding lesson clashed with my La Leche League meeting so my in-laws said they’d take her. Since they were both in the morning, it made sense for her spend the night, which she’s now done a few times. I still find this a huge deal but Talitha has absolutely no worries about it and really looks forward to it.

Birthdays
We went to a cracking fourth birthday party on Saturday of a friend whom we’ve known since she was six months old. I cannot believe our babies are proper children now.

Mother’s Day
Mother’s Day was a bit of a blur last year. This year Laurence helped Talitha make cards for his mum and me, and we all went out for a late family lunch at Poco in Stoke’s Croft. The cafe has great atmosphere and the food literally made the day for me. It was lovely to get together with family without anyone feeling like they had to host, though.