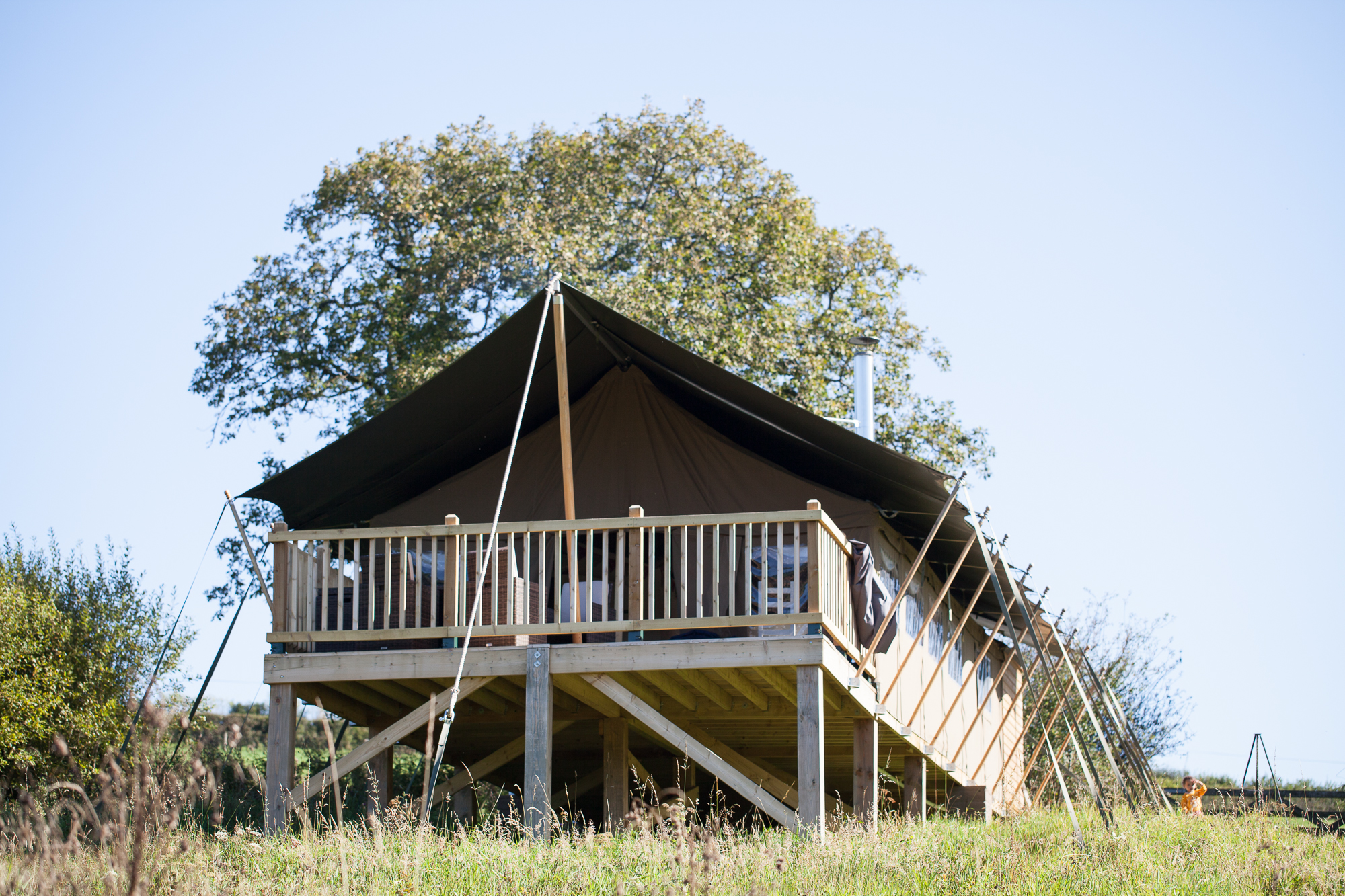 A couple of weekends ago, we spent a few days off-grid on the edge of Dartmoor. Visiting Dartmoor was on my list of 30 things to do before I’m 30 because I’d heard so much about how desperately beautiful the moorland is and because a lot of Laurence’s childhood memories were created there.

We’re also always curious about what a living more simply and sustainably could look like. So, when Canopy & Stars, the quirky glamping company, invited us to stay in a safari tent on Eversfield Organic Farm, it was the perfect opportunity to combine all these pursuits.

We were greeted by Anna when we arrived. She helped us cart our things down a hill on wheelbarrows to Haytor, the safari tent we’d be staying in. It was effectively a cottage made of canvas on a platform directly overlooking a peaceful private lake.

A quick look around confirmed that it was far more fully equipped than I had expected. In fact, the shower and toilet rooms are better fitted and more comfortable than our bathroom here at home! In a tent!

The kids made themselves right at home, lounging on the bean bags on the veranda and climbing up into the little shed that became Talitha’s bedroom for our stay.

Talitha wanted to eat every meal outside, to look out at the lake, but we had to insist that it was a bit cold for breakfast. Looking out the windows and opening the front flaps sufficed in the end.

Canopy & Stars spaces range hugely in terms of experience. There’s always an outdoor connection and something a little bit different but you could end up staying somewhere at the height of luxury (think a yurt with a dishwasher and Georgian furniture) or somewhere where you’re very much camping but in style. This stay was on the latter end. Eversfield Safari Tents fall into the off-grid collection.

So, we’re talking no electricity, except for a central point where the freezer is kept, full of packs to keep your cool bags going. We didn’t have phone reception either, which was quite liberating (though maybe a little less so when Laurence couldn’t find out what the score was between England and Wales in the Rugby World Cup).

We enjoyed chatting by candlelight and hurricane lantern as well as cooking our meals and heating the tent with a wood-burning stove. The stove presented a bit of a learning curve. At first, we underestimated how much wood needed to be chucked in to get it hot enough to cook anything but that was soon sorted.

Similarly, we were freezing the first night until Laurence got up and got the wood-burning stove going again. The second night he fired it up before bed and topped it up once during the night (what a guy). We were all toasty and warm. I also had the profound satisfaction of building my first fire to heat the water for my shower.

The first morning we were there, we took a little paddle around the lake. I promise, Laurence literally only turned the boat around for this picture, then I put the camera down and got in with them!

An animal farm, there’s lots to see and do on Eversfield Organic, including walks and animal feedings. We really wanted to see Dartmoor itself, though, so we went further afield.

After a quick stop in Tavistock to get hats (it was chilly and this was the one thing we’d forgot to pack), we had lunch at The Dartmoor Inn. The food was your basic pub food but it was amazing to sit outside, surrounded by the moor. We then found an easy tor to walk up. Laurence and Talitha tried their hand at geocaching. They were unsuccessful but it was still a fun jaunt and we finished it off with ice creams, sitting outside.

The next day, we decided to have lunch at The Castle which is a few minutes’ drive from the farm and recommended by them. It was easy to see why. We dined outside in a sweet little garden and had the best roast dinner I’ve had in years – maybe ever!

The real highlight of that day was wild swimming! This is another of my 30 things and I’m glad I ticked it off before it got any colder. We wanted to find Shilley Pool, a known wild swim spot and somewhere Laurence’s family frequented in his childhood. We ended up having to park by guess and walk up a little aimlessly, hoping we’d find it.

It was so interesting seeing Laurence suddenly remember where we were, showing Talitha the little cave that was pointed out to him as a child and having the memories flood back when we found the little pool. The water was so clear and fresh! And I actually summoned up the guts to get in – we all did! Exclamation points a-plenty because it really was that cold!

We came away with so much to remember and think about. We’re still unpacking some of the questions it raised for us about the way we live and what we’d like to do more of. Laurence has written a bit more about that in his post Coffee, canvas, caching and childhood revisited on his blog, Chasing Wilderness. Talitha keeps talking about it too. We’d certainly return.

Canopy & Stars invited us to stay two nights in an Eversfield Safari Tent free of charge for the purposes of this review.