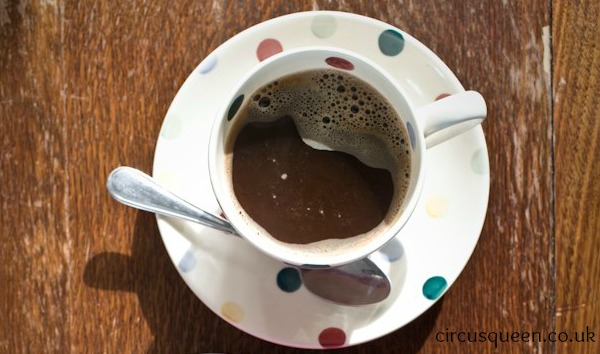 Almost four weeks into Lent, I can finally say it: I’ve kicked my addiction to caffeine.

For years, I’ve been saying I’d do it but was always too busy, lazy, tired, depressed, socially active or in denial to give it a proper go.

I’m not lightly throwing around the word “addiction” either.

I wince when the skinny guys on Supersize vs Superskinny (how’s that for high brow television?) name their Coke count at ten or whatever, starting with breakfast and practically breathing the stuff throughout the day.

Yet, it’s been easy for me to ignore the fact that I’ve been drinking six to eight cups of tea and coffee almost everyday since moving to England eight years ago.

That’s with the exception of pregnancy. I went off it in a big way while pregnant and was feeling so awful anyway that I probably didn’t notice withdrawal symptoms.

So, no surprise that giving up this time round left me so flat I wondered if I was pregnant. The first four days were patterned with the sweats, exhaustion, headaches, nausea and obsessing about tea, coffee and chocolate pretty much constantly.

I kept sending Laurence texts: “I think I’m dyyyyying”. What’s rehab without a touch of melodrama, even if we are talking caffeine?

Actually, of the obsessive behaviours I’ve worked through over the years, caffeine addiction is obviously one of the more innocuous. Unfortunately, it’s social acceptance made it difficult for me to admit that it was a problem.

Now that I’m off the juice (minus the three decaf coffees I’ve had in the past month) I can see how badly it was affecting me. I’m convinced it made my pre-menstrual syndrome violently worse. My skin is starting to look clearer and generally healthier. My thirst has returned and water even tastes better.

Going caffeine-free has also hugely improved both my sleep and – get this – Talitha’s. It could be coincidence, but her night wakings calmed when my withdrawal symptoms did. I guess with that amount of caffeine flowing through me, it’s unsurprising if there was a significant amount transferred into my milk. I’d love to look into the research around that a bit more.

However, the effects that have most surprised me are psychological. I feel stronger for having been able to take charge of this petty thing and actually change an ingrained habit.

I’ve been encouraged in my desire to re-orient spiritually, to be ruled by God alone and not by things.

It’s funny that I’ve arrived here when I didn’t decide to give it up for Lent through any serious hope of deepening my connection with Him. It was more that I hoped a time frame would help me be disciplined. The community I grew up in tended to view Lent as a Catholic relic and not something we practised.

The older I get, the more I value traditions which support life’s rhythms. It probably helps that I’m living in a country with four seasons instead of two and live much more outdoors than I did in Trinidad.

A walk in the park with my toddler offers so many signs that the world is coming back to life. I feel the call to return with it.

And if a small thing like replacing builder’s with red bush can help me sense that call more clearly, why not, eh?

Finding “balance” and letting it go

I didn’t grow up with Advent

Hearts for Halloween – Lanterns of Hope for Those Living in Fear

Observing Good Friday with a toddler