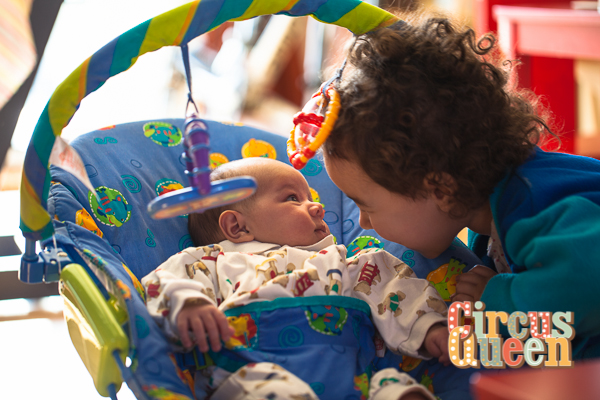 I can scarcely believe that today will make it four whole weeks since Ophelia’s birth. In one sense, I think: “It can’t have been that long ago?” but it’s also already beginning to feel like she’s always been with us. I wonder whether Talitha remembers much about life before her. She probably does. Though we’ve had the beginnings of a routine with Laurence going back to work, things aren’t exactly settled yet. It still feels like we’re in transition and I’m sure she feels it too.

As for little Ophelia! She has changed so much in this short time. For a start, she is just piling on the weight. Though the scales reassure (she’s gaining very well), I could tell just from looking at her and, more importantly, from how much she’s pooing (!) that she’s absolutely thriving. It’s such a relief not to be repeating the last breastfeeding journey. She’s out of the newborn clothes, which reminds me how important it is to slow down and enjoy this fleeting time.

At times, it’s difficult not to look longingly into the future, though. This has been particularly true between about 4pm and 7pm every day this week. From the middle of her second week, it became clear that that was Ophelia’s fussy time. I’ve been happy to go with the cluster feeding, knowing how normal it is. I’m grateful that it hasn’t caught me off-guard as it would have done on my first baby.

It’s hard work, though, because she spends quite a lot of this time also fussing at the breast. So, it feels like not much I do helps. Meanwhile, my two-and-a-half-year-old needs me. Talitha mostly copes well with the crying, wandering off and finding things to do, but she does get a bit frustrated that I can’t give her the attention she wants (mainly because I can’t hear myself think!). So, this is a learning curve. I’m bolstered by knowing that this fussy period will pass and that I need to not get hung up on wondering when.

The rest of the time, Ophelia is so unbelievably chilled out. I even asked the health visitor if she thought she was jaundiced because I couldn’t believe a child would sleep this much and be OK. That’s been the theme for this month, a sleeping baby. If we’re at home, she spends the morning in the Moses basket and if we’re out, she’ll be zonked in the sling.

I also feel like a fraud when people ask how nights are because I should be sleep-deprived but actually she sleeps between five and seven hours most nights (for now – I’m under no illusion that this will likely last). I was waking her every two hours at first but when it became apparent that she was gaining well and it was becoming near impossible to wake her and keep her awake long enough to feed, I gave up and enjoyed this blessing I’ve been handed, even if it is just for a bit.

Gradually, she’s starting to spend slightly longer periods awake. When she’s awake, she studies your face like she’s memorising it. This past week there’ve been a couple of what appear to be social smiles, only for Talitha. She already loves looking at Talitha, which is great because Talitha loves to chat with her. At the moment, she’ll ask me to put Ophelia in the bouncy chair, then she pulls up her little chair to face her little sister, showing her how to play with the toys that hang above, having random little conversations with her and gently patting her.

The other thing she loves is to be placed on her tummy. This is so strange for me to see as Talitha always hated it, so her tummy time was always in the sling. Ophelia is so strong she’s already trying to push herself up and she’s quite content to spend time doing that for a few minutes on the Cosyplay (pictured above) we were sent to trial. It’s a memory foam change and play mat which is extremely soft, features bright, friendly colours and seems very well-made. It’s been through the wash once so far (post-poosplosion) and has fared fine. I wasn’t sure how much “play” use we’d get out of it but it looks like we have a baby who’s up for that.

I met a couple of mums with babies a few weeks older recently and it still amazes me how much change happens in this time. They really aren’t tiny for very long.