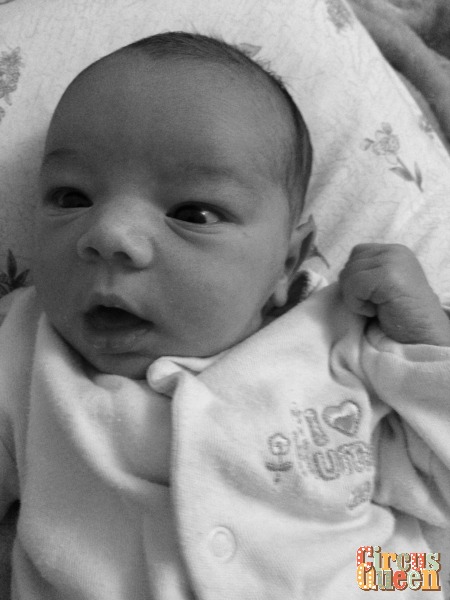 One week in and I really can’t believe how well it’s all going this time.

Last time I felt like I’d been hit by a bus – for months! This time, my recovery has been remarkably speedy (still taking it easy though). That’s despite having been more banged up this time. I can’t work out if that healing’s down to a better birth, a natural third stage, placenta capsules, less worry or just the fact that I have to get on with it for my toddler. Maybe it’s a combination of them all. Fingers crossed for future, but I didn’t even get first week baby blues this time.

I’m sure all of us are experiencing a honeymoon period right now. Taitha is unbelievably loved up with Ophelia. She wants to see her first thing in the morning (a mixed blessing for me), delights in Ophelia’s wakeful periods, counts her toes, talks sweetly to her and, of course, sings “The Wheels on the Bus” to her – over and over and over.

There have been times where the stress of this big life change has peeked its way through, with sudden renewed interest in long forgotten baby toys when Ophelia’s looking at them. Or wanting to be held by the person carrying Ophelia. On the whole, she’s been pretty understanding so far that the baby needs things that she doesn’t. She understands, mostly, that I can’t feed both of them at once, for instance, and that Ophelia needs to be fed first. I’m expecting a huge parenting learning curve when it’s just me at home, trying to balance their needs.

How I worried about this beforehand. I had such a hard time establishing breastfeeding with Talitha due to a missed tongue tie which led to low milk production. I just couldn’t face going through all of that again but prepared myself for the possibility.

What a surprise then when Ophelia only nursed for efficiently with lots of swallows then seemed settled. The proof was in the poo. It went yellow within the first 24 hours (normally you can expect this to take a few days). And boy there is so much poo! We got off easy in the nappy change department last time! I meant to do disposables for a bit at first but moved over to cloth as soon as her umbilical stump fell off (found disposables easier to fold) at six days. We expected to see a typical weight loss in the first 72 hours but instead she gained!

This has been such an answer to prayer, truly. Obviously, there are likely lots of breastfeeding challenges to come but I’m so relieved to find that I can make milk. And with that discovery, it’s useful having a toddler help to relieve any engorgement!

It does make me a little sad, though, that I wasn’t able to give this to Talitha. It’s not just about the breastfeeding or the birth but just the constant state of stress that pervaded those first days (obviously that’s related – they all are).

I know, though, that I gave her the best that I could at the time. I am a different person now. I know more, I understand more, I trust more. Just because this time it’s all different doesn’t mean that what I gave her wasn’t good. And anyway, throughout their lives, they are going to get different things at different times. That’s just the way of it.

If you like Circus Queen, please consider nominating my blog for a MAD Blog Award. I’d especially appreciate a nomination in the Best Blog Writer and Best Pregnancy Blog categories.