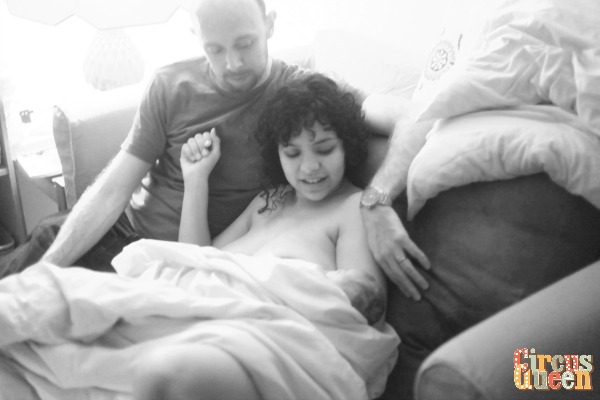 I’ve wondered since what it could have looked like in a photograph – that moment she shot out of me with one last mighty push. I’m glad no camera caught it, that everyone in the room was too involved to pick up a camera. Seeing it through another’s lens might have warped my own memory. My memory of it is perfect. A perfectly formed, tiny baby plunged out into the water and suddenly there was relief.

It felt like many hands got in the water to catch her. It was a moment of confusion. Our doula had told the midwives that I wanted to be the first to touch and hold my baby. In second stage irrationality, I doubted my ability to do it. I said “No” and asked no one in particular to do it. Silently, I was telling them that I wanted them to do the whole thing for me, pushing and all.

An hour and a half of pushing and I was getting fed up and losing faith. I tried to conjure up the waterfall, the stream at Grand Riviere in Trinidad, the opening hibiscus. I confused everyone by alternately asking for water and saying “waterfall” so they weren’t sure whether I was thirsty or focusing on my downward breathing image.

There’s no doubt that practising KG Hypnobirthing techniques was hugely effective throughout this labour but there came a point where I couldn’t or wouldn’t do the calm, serene, “breathe your baby out” the way I’d planned. Instead, it was primal growling and shouting: “I can’t do it. I don’t want to. No, no, no!”

Incredibly, part of me still wondered if I was really having the baby. Maybe they were all wrong. Maybe I wasn’t even dilated yet. But I knew what I was doing wasn’t helping. Laurence kept reminding me to keep my noises low, which really helped even though it annoyed me. He said “waterfall” a few times and I almost snapped: “Fuck the waterfall!” but didn’t because I knew that once I started swearing I’d keep on doing it and that would mean giving up what focus I had.

It’s really hard explaining this thought process because it wasn’t really thought in the conscious sense. It was all a deep knowing.

That makes me realise I’ve started this birth story in a strange place, at its most incoherent point. I’ll go back.

The day before, Sunday, we were wracked with uncertainty. We had just found out the day before that I was Group B Strep positive. GBS is a bacteria that it’s estimated 25 per cent of pregnant women carry in their bodies. Colonisation of the birth canal can come and go so, many of us have it when we’re giving birth but never know. While the bacteria is harmless in adults, it can be very dangerous in newborn babies who contract a GBS infection. Very small numbers of babies are affected but it’s serious when they are.

So, it’s generally recommended that intravenous antibiotics be offered during labour (though this translates into “be strongly advised” in our area). We looked at articles on the websites of the GBS Society, AIMS (Association for the Improvement of Maternity Services) and the Royal College for Obstetricians and Gynecologists. We drew up lists, we discussed, we agonised, we prayed. Then we decided to continue with our plan to have a home birth, keeping an eye on my temperature during labour and observing Ophelia closely after she was born.

I don’t mention any of this to convince anyone either way of what should be done in such a situation. I’m sure that had we gone to hospital and had the antibiotics that that too would have been OK and indeed it would be the right decision for some. For us, this was the choice we needed to make. It’s an inescapable part of the story because it reintroduced something key we’d already released in preparation for this birth: fear.

Yet on Sunday, we got peace. Two people who didn’t know us, at a church we don’t normally attend, came up to us separately to pray about the birth. After putting Talitha to bed, we talked about how present we felt God was as we looked ahead to the birth, which we still expected to be two weeks away. We agreed that I would phone the unit the next day and speak to the Supervisor of Midwives to iron out what all the different options were in our situation. I never got the chance. I woke up at 4am on Monday in early labour.

After an hour of surges, I woke Laurence and told him it felt different and that I thought I was in labour. I don’t think he took me particularly seriously, which didn’t matter as I didn’t need him at that point and wanted him to go back to sleep.

I couldn’t sleep so got up and cleaned the bathroom and the kitchen. I may even have done some laundry. By the time Talitha woke up, the surges were gathering strength. I started to sing and sway through them. “What are you doing, Mummy?” she asked. “I’m dancing,” I replied, suddenly realising that she could not be there. I’d hoped to have her in the house during the birth but now knew that I’d never progress unless I could retreat wholly into myself. That would not happen with her around. So, Laurence rang his parents and his father came to pick her up, along with a night bag I hoped she wouldn’t need.

It was now past 10am. Everything had slowed down. We went for a walk. I continued to have surges. By now I was appreciating holding on to Laurence. His slow breaths helped steady mine. We had lunch and watched My Big Fat Greek Wedding. It was all candlelight, laughter and romance. At some point I napped between surges while listening to the Colour and Calmness hypnobirthing CD. And it all gathered speed.

By 2pm I wanted to be on my own, planting myself on the toilet, sniffing frankincense and visualising hot air balloons. What happened when is hazy from there. We called our doula, Nicole, over at some point and she helped with the birth pool and with setting up the recovery area.

To my disappointment, everything slowed down again as soon as she got there. It was familiar. As soon as someone new entered the situation, my surges lost their intensity and moved further apart. I felt awkward about it but ended up asking her to leave for a while. Apparently, she’d also felt that she should go but didn’t want us to feel that she was abandoning us, so it was good all around.

When she’d gone, things picked up almost immediately. I reached a point where I desperately wanted to get into the birth pool but, worried that it could slow down the labour, I opted for a shower instead. Weirdly, the water from the shower both offered relief and massively sped things up. I finally got out, not sure what to do next when I felt that I HAD TO GET IN THE POOL.

I think at that point he was a lot more aware of the urgency for the latter than I was. I was still wondering if I was in active labour. I was torn between not wanting to give birth unassisted and not wanting someone I didn’t click with to insist on examining me and tell me I was “only” 2cm dilated. At this point, though, Laurence was dead certain it was on.

Nicole came in quietly. It should have been a real signal to me that things had progressed. The first time she’d come, I was awkwardly aware of her presence. I’d even adjusted my pyjama bottoms to cover my bum while on the birth ball. The second time she came, I registered her presence but welcomed it. I was stark naked and unconcerned about the fact. It was primal. It was on.

Laurence read me Psalms and KG hypnobirthing scripts. I let my mind go with them, resting with the words and images. My body moved in ways it felt it needed to – rotating, head shaking. Unfamiliar sounds leaked out. Nicole asked if I was pushing. I told her that I felt the pressure but didn’t think I was dilated. She knew I was but just said that it was OK, that I didn’t need to know what was happening.

Finally, I said (or maybe begged), “Hot!” I heard her whisper “Transition” to Laurence. My eyes were closed. Thankfully, they mouthed the rest. I never knew that the midwives were lost in another part of Bristol and taking a long time to come. Transition came with a beautiful lull. A short rest. Then, the pushing fell on me. I found it harder and harder to modulate my tones. At one point I shouted: “I need a midwife!”

Laurence and Nicole continued to calmly encourage me. Then I asked (or maybe told) him to be quiet. I only wanted to hear a feminine voice. Even at the time I found this interesting.

The midwives arrived, coming in quietly and keeping a respectful distance. They were there thirty minutes before the birth so didn’t even have a chance to look at the birth plan. There was a conversation about them wanting to listen to the fetal heartbeat and being told that I didn’t want to be asked, I just wanted it done. I snapped: “Just do it!” To my amazement, the heart was beating from so low down, the baby was certainly about to come out.

I’m not sure when I threw myself back but I felt I needed to be on my back in the water instead of upright on my knees. I shouted: “Somebody hold my legs!” It was not how my head had wanted to birth. It may even have contributed to my tear but it was the position I felt I had to be in and that truly is enough for me.

Her head came out and was sucked back in. Over and over. I asked about getting into another position but couldn’t bear to move or be moved. The midwives told me I was fine where I was and that it was happening. With the last surge, I decided I was done with it and consciously pushed. No head lingering for a moment before the body slips out. She shot right out of me.

Natural third stage, cord burning and recovery on the sofa with my sweet baby at the breast were followed a few hours later by a trip to hospital because of concerns over my tear (it was thankfully just second degree) and a 24-hour stay as a compromise because the paediatricians were worried about Ophelia in light of the Group B Strep positive result. This last bit is part of the story too but needs nothing more than a mention.

That moment of pulling her out of the water and onto my chest anchors, eclipses, transcends all.

————-
If you like Circus Queen, please consider nominating my blog for a MAD Blog Award. I’d especially appreciate a nomination in the Best Blog Writer and Best Pregnancy Blog categories.