Our babywearing journey so far 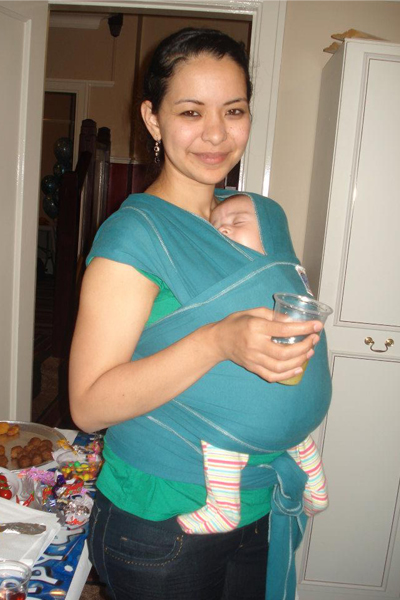 When I heard that this week was International Babywearing Week, my first thought was that some people take pieces of cloth a little too seriously. A public awareness week for slings, carriers and such things? Really?

But actually, I can’t believe how passionate I’ve become about the subject myself. What began as a mode of transport has become a lifestyle for Talitha and me. She has, quite literally, attached herself to me.

Back in April I asked for a woven wrap for my birthday merely as an alternative to the pram. When it arrived, a gift from my parents, I admired its beauty then put it aside and, characteristically, forgot all about it.

Then my tiny baby arrived. And needed to be held. All. The. Time. Like, seriously.

Severely lacking in all things technical I asked “the adult” to try her in the wrap figuring he could work it out seeing as his sailing background had taught him a thing or two with knots.

More than once, we each cast the thing aside in frustration. How could a piece of cloth be so complicated?* Then, in desperation, I asked the people in the Born shop in Gloucester Road about slings. They explained that it’s often easier to start with a stretchy wrap when you’re just starting to learn the skills involved in babywearing.

With that, I bought a Moby. And proceeded to neglect that as well because I was scared of it. Of course the technical one picked up the instructions, tied the cloth, stuck the baby in and looked like some hippie papa au natural. He made it look so easy.

Every time I wore Talitha I worried that I was messing with her spine or cutting off her air supply. I felt uncomfortable and was even concerned that other, more experienced babywearers were looking at me and secretly tutting that I was doing it wrong.

I’m not sure when any of this changed but at some point I got the knack. I began to trust myself. I started to enjoy the closeness of my baby and the fact that being snug against my body made her comfortable enough to sleep.

For me, this hasn’t just been about getting her to drift off or returning my mobility. Wearing her has allowed me to carry her a little longer in an external womb.

Now for the past month she’s insisted on sticking her head out whenever she can, hungrily taking the world in and I feel that I’m still giving her a sense of security as she explores. When she’s tired, she still has somewhere familiar to retreat.

So, this is in praise of the cloth I’ve become so obsessed with it’s comical. Happy Babywearing Week!

* We’ve since worked out our woven wrap, just about, and it is lush. Tomorrow I’m reviewing an altogether different kind of carrier: The Baba Sling.