Our family bed set up 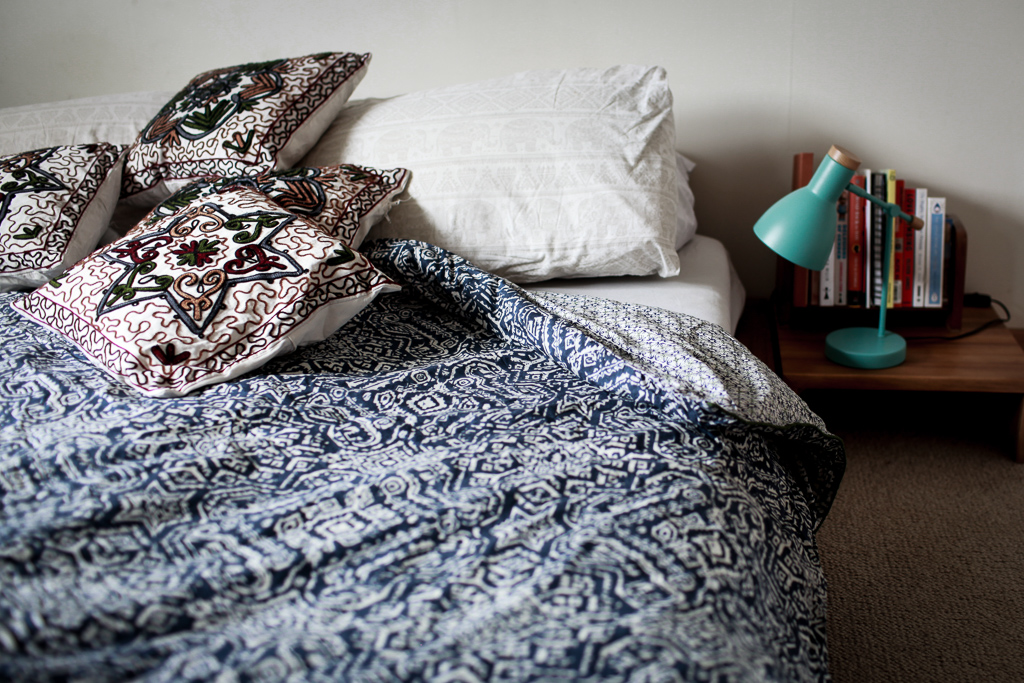 Debenhams recently sent us new bedding to give our bedroom a mini makeover.

We’ve been through lots of configurations when it comes to sleep. Having bought a cot and a Moses basket with our first baby, we surprised ourselves by being three in a bed instead. Bedsharing proved a natural fit for our family so, though we got a moses basket again second and third time around for daytime naps (and it went unused!), we didn’t bother with a cot. Instead, we’ve sometimes been four in a bed, four in a bed and one on the floor, two in a bed, two in another and one on their own. Different set ups for different seasons. Currently, we only have twenty-two month old Delilah in with us. Ophelia, who’s four, occasionally joins us too but mostly prefers her own space. If Laurence is away, all the children join me.

It’s not perfect; I do love my space at night. I probably wouldn’t be adverse to twin beds instead of our king, though that might be the touched-out-ness of these early years talking. We even have separate duvets, partly so we don’t steal it off each other, partly because I run hot while Laurence runs cold. But for all the crowding, it’s also plenty lush, cuddling little ones to sleep, knowing even those who have outgrown the cuddling still find security in being near to me. And, of course, it won’t be forever. I came to bed to find Laurence holding sleeping Delilah and five years later, the memory of Talitha at that age is already blurry.

We’ve mused that Delilah might stay in with us longer than the other two did. We moved them out of necessity because I couldn’t bear to breastfeed at night while pregnant and they found it difficult to sleep next to me if this wasn’t an option. With Talitha, it was a simple transition. She was two, we’d just moved house, we decorated her room with her and she loved the idea of her own bed. Laurence was sometimes in with her if she woke but she mostly slept through.

Ophelia found this a lot more difficult. I fell pregnant with Delilah when she was 21 months old and, in retrospect, she just wasn’t ready for all the sudden change, whether because of age or temperament. We moved her out, I night weaned but she was up and unsettled every night for months. It’s easy to look back and say what I’d do things differently but, in reality, all I can say about it is that we did what we thought was best for us all at the time, we muddled through, and thankfully things are settled now.

But neither of us are ready for a repeat and we’ve both got so much more go with the flow with each child added to our family. As Delilah’s our last baby, she’ll likely stay in until she wants to join her sisters. So this is our family bed set up for the foreseeable.

In our last place, we had quite a high bed so used a bed guard with a towel rolled and tucked into the gap for added peace of mind. It worked but it felt like a function-over-style choice. When we moved we bought a low futon-style bed, complete with matching side tables. Initially we chose it so we could sit comfortably in bed with our cottage’s sloping ceiling but it’s also offered the benefit of causing less worry about little ones rolling out of bed or crawling off.

And it’s got us thinking a bit more about how we style this space so it’s actually somewhere we enjoy being, not the dumping ground our bedroom always used to be. Updating our bedding has definitely been a part of that. The Bedeck 1951 “Juma” duvet covers pictured here are a departure from my usual penchant for grey and white sheets. The South American-inspired geometric designs are eye-catching without being too busy and the combination of the ink blue pattern and deep green edging is cosy without dominating our airy bedroom. A child (or two or three!) may sleep here but it still feels like a grown up’s bedroom.

What’s your family bed set up like? Do you all sleep together or in some other configuration? Have you a massive bed? We used to love our extra king! It was definitely needed for a season. Let’s share some inspiration for others making it work with bedsharing.

For more posts about bedsharing, check out this golden oldie about bedsharing as a family of four and this book about nighttime and naptime strategies for breastfeeding families.

Thanks for sending me the duvet covers for this post, Debenhams!