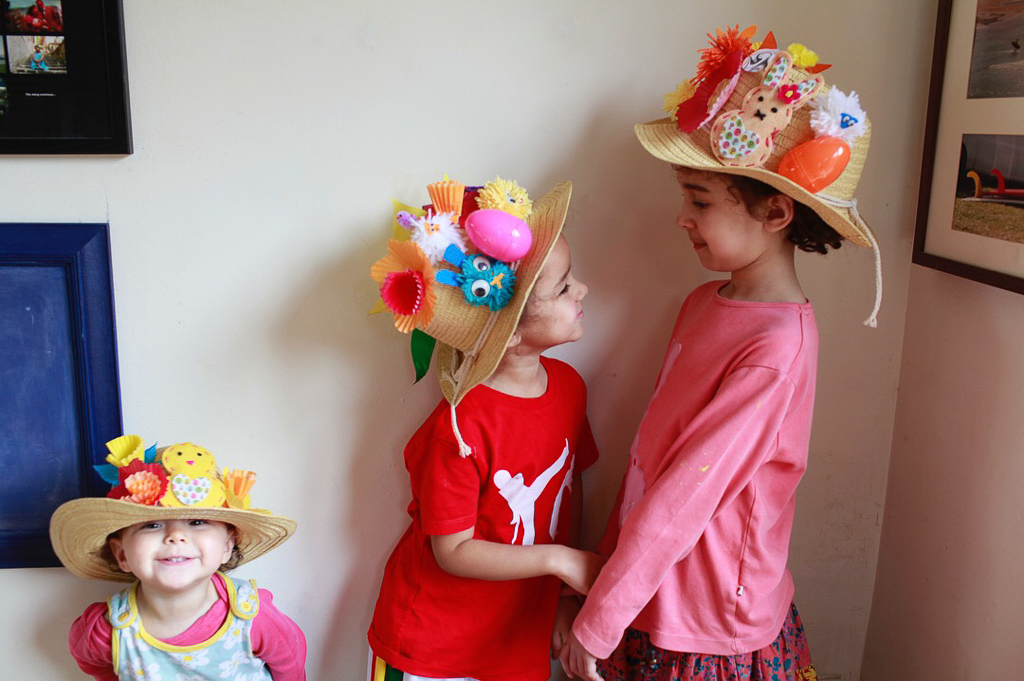 We’ve been following Story of the World since September. It’s our first year consistently checking out history. I very loosely look to The Well Trained Mind for ideas of what to offer when so we’ve been hanging out in the ancient world.

Six-year-old Talitha has been drinking it all in and was especially enthralled with ancient Egypt. I suggested we pick up the pace quite a bit more this past term because I imagined she would love arriving in ancient Greece (we have and she is) but we found lots to capture the imagination along the way, especially in ancient China and Persia.

Last term, I read them adaptations of The Trojan Horse, The Odyssey and Shanhameh: The Persian Book of Kings (still going on this one and she’s read it to herself a couple of times too).

In all this, I’m amazed at how interested Ophelia is. She often wanders in and out doing her own thing, not appearing to be listening at all and then will ask a poignant question or later muse about something we’d been reading or talking about. I don’t think she’s even aware that we’re reading these things primarily for Talitha’s benefit. To her there’s no demarcation. She may only have just turned four but she regards herself as home educated. All the things we do are, to her, just another part of how we live together.

And so she expects to participate. She’s been asking me to write words for her, which she copies, and she now knows most of the letter sounds and can sound out very simple words. She recognises a lot of numbers and works out simple sums without realising that’s what she’s doing.

I’m so laid back with her, partly because in the end Talitha became a fluent reader on her own. Apart from occasionally offering her Reading Eggs or, more recently, Teach your monster to read so she can play alongside Talitha, I just let Ophelia be. As she fills pages with random numbers and letters, three-letter words and her own name, as she sits and recites books to herself and her baby sister telling me she’s reading, it’s such a pleasure seeing her develop in her own way, a constant surprise.

This last term saw her suddenly shift to longer books so although we have a steady stream of picture books, she devoured James Herriot and was suddenly all about Beatrix Potter – we need to get some more of the latter. She also listened to her first chapter book, My Father’s Dragon, which is also the first chapter book I read to Talitha when she was four.

Talitha has read it a few times since so I read her The Lion, the Witch and the Wardrobe. We’d been putting it off for ages because I tried reading it to her about a year ago and she was too worried about what would happen when they got to the witch so we shelved it. With a lot of discussion and the promise that we’d stop if it became too much, we approached it again. This time, the book was a delight from start to finish. This was absolutely the right time for her to encounter it. I’m glad I didn’t try to push through with it when she was five.

At the moment we’re halfway through Charlotte’s Web. Talitha’s already read it but she’s finding that listening to it is quite a different experience. We found the same with Little House on the Prairie. She flew through it on her own, enjoyed it and clearly understood it because she kept accidentally giving us spoilers when I read it aloud but she was still super keen for me to read it.

I’m finding that she’s begun to prefer to read fiction to herself than to be read to. Recently I’ve been wondering how to navigate this and I found the transcript of The Read Aloud Revival’s recent podcast on reading aloud to 8-12 year olds helpful on this point. Sarah McKenzie explains why we stop reading to children when they become proficient readers and value of continuing to read to them. For one thing, their listening comprehension is generally a lot higher than their reading comprehension so it exposes them to richer language and prompts discussion. Reading aloud also keeps a relationship around books open, which I’m keen to sustain. Anyway, do check that out if it’s something you’re interested in. It’s given me lots to consider.

We started using Mystery Science this last term which both of the girls are loving. The lessons are videos with open and go activities, set by grade. If there’s any writing required, Ophelia just draws instead. Again, there’s no expectation that she’ll join in but she expects to join in! We spent the term mostly on the human body, driven mostly by Ophelia’s many questions. So we looked for “mysteries” on body systems, dug out a Whizz Pop Bang magazine on bones and an OKIDO magazine on lungs and read the human body books we have here at home.

We once again moved a lot of our home ed stuff to the dining room. We have a playroom but I think I need to stop insisting that all this stuff has to live there when the kitchen/dining room is the natural hub of our home. This included putting rehoming the Spielgaben (a collection of open ended wooden toys we managed to get second hand a few years ago) in our diningroom shelf which has been brilliant for encouraging me to use it.

They’re always creating with it but it was a bit out of sight out of mind for me in the playroom so moving it here got me looking at the resources that came with it and I asked Talitha whether she’d like to try out the maths games. So that’s been fun to do alongside Life of Fred and Mathseeds and I’ve had a new appreciation for the precision the collection is made with in terms of how the sets all fit together. I’ve also started offering Delilah sets to play with. She loves hiding the knitted balls, posting pieces or threading beads on a stick.

The older two are also heavily into boardgames now that Ophelia can (with support) hold her own. That’s even led to them inventing games of their own. Talitha’s also started using Scratch, which is one of her favourite things right now, a fun free programme which teaches kids to code by allowing them to create games and animations.

As always it was a term of special days with Candlemas Day, Trinidad and Tobago Carnival, Chinese New Year and, of course, Easter. And Talitha and Laurence went to see a touring First Experiences version of Julius Caesar by the Royal Shakespeare Company in Newquay. I’m still gutted I was too ill too go but it was a good experience for them to share. AND it snowed and settled! TWICE! Thrice?! I actually can’t remember. In Cornwall where it NEVER snows! I know that’s more a life thing than a home ed thing but actually, it all flows into each other, doesn’t it?

Talitha’s continuing with the violin and Beavers and both she and Ophelia took up capoeira last term and have just started with a Spanish class. We’ve also continued with our community art group. I’m conscious that we’re probably too busy (and it all adds up!) and Talitha has been asking about swimming lessons so we’ll have to make some changes this term.

The takeaway for me, as always, is that a lot happens without me noticing or needing to cause it happen. We don’t have any plans for the term ahead but I’m going to try to chat about what we’re up to a bit more regularly here on the blog. I tend to share a lot on my Instagram stories if that’s more your jam. We’re likely going to continue using the resources I mentioned here but the changes I expect we’ll slow down a lot, spend more time up at the allotment and once the boat gets in the water, that’ll become a focus too.