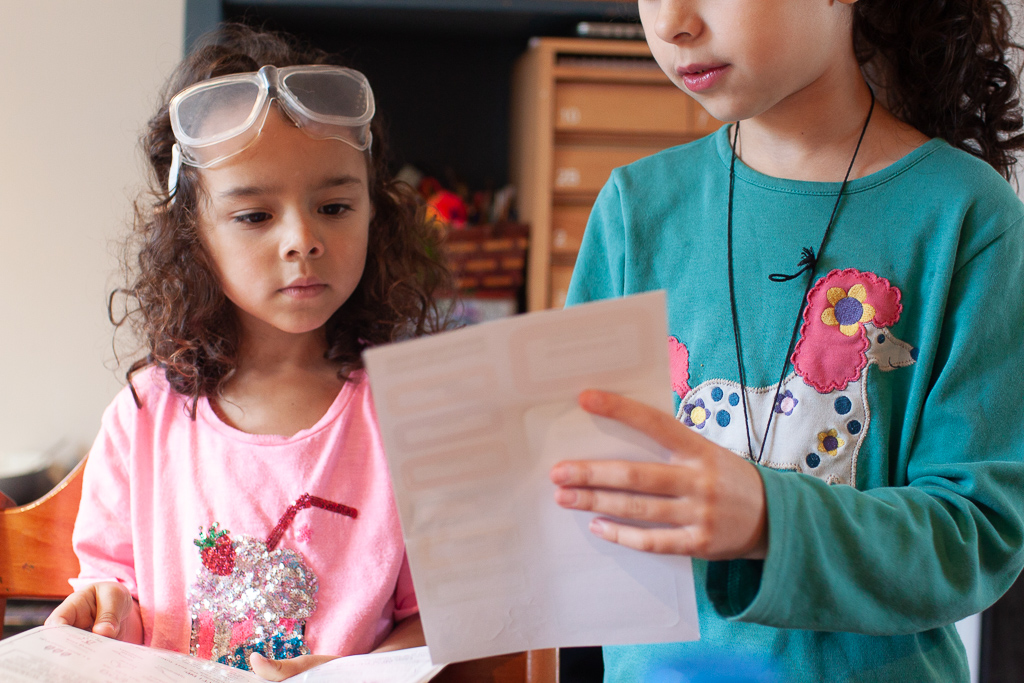 I’m toying with the idea of doing a weekly update on what we’re getting up to, partly to remind myself that we’re doing more than I think on days when I feel unsure about everything. Realistically, though, it’s impossible to record everything because home education encompasses all of living.

I’ve also omitted some stuff because this post would get insanely long if I included everything. If you have questions about anything we use or do, please drop me a comment and I’ll get into it in another post soon.

Learning happens as much through conversations and unstructured play as through anything any of us are reading.

In true January style, the kids wrote thank you cards this week. Even two year old Delilah had a go at writing her name, which meant adding a few dots. We may have got an insight into why she doesn’t tend to make marks or scribble often as we found out on Monday that she needs glasses. The eye test at the hospital and glasses fitting at the high street optometrists were definitely educational experiences – for all of us.

Writing isn’t something that comes up as a subject here. Talitha taught herself to write in cursive when she was six (she’s seven now) by asking me to write all the letters in a book that she then referred to and I give suggestions if I notice that something is a little hard to read as I know that matters to her.

Ophelia (almost five) has started asking me to write sentences so she can copy them but I allow her to be as avant garde as she likes about how the letters go unless she asks for help. She tires easily so after writing one of her thank you cards, we agreed that she’d dictate the others to me and sign her name. She doesn’t read yet so I imagine it’s exhausting from that perspective too.

Writing with a purpose, whether it’s a letter to a friend, an invitation to a pretend tea party is enough here. Writing also comes up in other things we do like history or science so practising it separately would feel like overkill.

I’m not really working on anything with Ophelia other than to go through Teach Your Child to Read in 100 Easy Lessons which I’d abandoned last term but she pulled out again and asked to keep going.

It’s a simple, fairly enjoyable book to follow but as it went with Talitha, every now and then there’s a leap in her ability to bring things together, whether that’s recognising a letter or blending sounds and I’m not convinced that the lessons are contributing as much to her learning to read as her natural development and exposure to lots of books are. Yet she wants me to practise reading with her so we’re doing it at her pace, following her interest.

We finished Story of the World Book One last term so we’re reviewing ancient world history by putting together a timeline. The activity book that accompanied the last book contained review cards so we’re reading those and looking at an encyclopaedia to work out what are the most significant things to remember.

It’s been an opportunity for us to chat about other things one of us has learned about those events since through books, games or things we’ve watched. She’s been linking things she’s writing down with history workshops she did at the Royal Cornwall Museum in Truro last year, telling me more about what went on in those sessions than she did at the time.

We’ve just finished our read aloud, The Horse and His Boy, having put it down over Christmas and I had a few suggestions for what’s next but she’s asked for more Narnia. I was surprised because I thought she’d prefer to read them herself but then, I have fond memories of my mother reading them to us so I do get it.

Ophelia isn’t finding it that thrilling though so we started Pippi Longstocking as a separate read aloud for her (Talitha’s read it herself a few times) and she’s enjoying that a lot more, complete with images by Charlie and Lola illustrator Lauren Child.

For science we’ve been on separate tracks with Ophelia working through last month’s OKIDO magazine on homes and habitats, mostly doodling away at things like filling a tent or drawing the inside of a house but also finding out about what animals live in deserts, jungles and so on.

Talitha and I have been making time to read Whizz Pop Bang because she wants to keep the subscription but finds it more interesting to go through it together. She’s been thrilled that so much of it links with things she’s seen or heard elsewhere, from websites to other magazines to her Beavers meetings.

They’ve both been doing Mystery Science, catching up on all the short Mystery Doug episodes and working on a lesson on clouds. We were aiming it middle of the road in terms of age but we tried a lesson that fell in Talitha’s age group and Ophelia still enjoyed it, though only Talitha did the extension activities.

They’ve also worked together on a couple of experiments about colour mixing from a Horrible Science kit their uncle gave Ophelia for Christmas, sharing the super fun goggles and Talitha reading the instructions.

They’re also having a lot of fun with Artventure. I toyed with the idea of it for ages then bought a subscription just before Christmas because I realised that in terms of art instruction, it just wasn’t going to happen unless we had a resource to follow that didn’t involve me and we can’t afford art lessons right now. They’ve watched other art videos in the past and I find it interesting seeing them incorporate ideas into other drawings or gaining perspective from the exercises.

Forest school resumed this week for Talitha and we managed a couple of beach and woodland outings too – beautiful outdoor spaces ever a bonus of home educating in Cornwall.

We’ve taken up Spanish again at the children’s request but I’m finding it difficult to do it with any consistency. Talitha likes Mango Languages but it’s too much for Ophelia. Both seem to learn better when I talk to them reviving the little A-level Spanish I remember. We’ve also been deciphering lyrics of the Coco soundtrack, which has been fun.

We’re trying to get back into a pattern of baking so I helped the younger two make chocolate cupcakes and Talitha made her own bread dough. I’m keen to encouraging her to continue to take on tasks in the kitchen independently.

Too often I feel like it’s easier if I just get on with whatever needs to get done but all three children love doing things that are genuinely useful and it’s not something I want to dampen by being too impatient or busy. That goes for just about everything they’re learning, really.