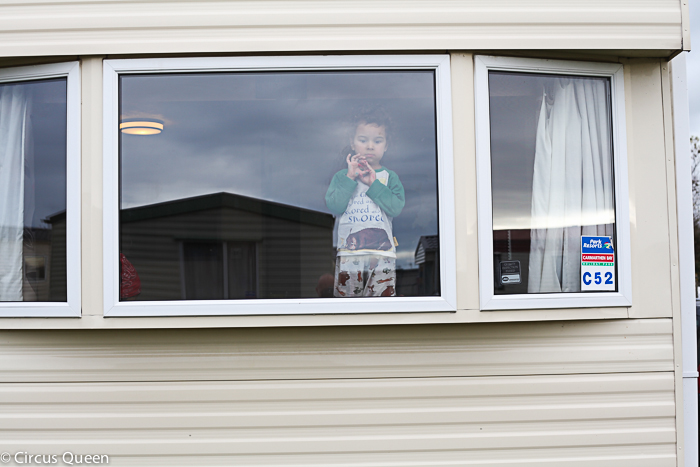 A couple of weekends ago, we were invited to review a Park Resorts holiday site. We chose Carmarthen Bay in Wales because it’s only a two-hour drive from where we live in Bristol.

We drove there on the Friday night with a quick stop at the big Morrisons in Llanelli because, despite Park Resorts reminding us a million times that we needed to bring towels, we still somehow forgot.

When we got there, we were truly impressed with the caravan. It was massive; certainly big enough for six people as it claimed. My brother and my sister-in-law joined us for the weekend away, so we were four adults, a three-year-old and a baby.

We could have pulled the sofa bed out in the living room space but we decided to keep the kids in with us in the master bedroom – Talitha slept on a long cushion on the floor – and the other couple took the second bedroom.

Taking more of a look around during our lazy morning the next day, we were pleased with how clean the caravan was. All the basics were covered. I was pleased to have remembered to bring our cafetiere, though I meant to bring a sharp knife for chopping vegetables and forgot. Anyway, nothing like curling up with a coffee and the paper by a window on an Autumn’s day.

There was central heating and a fire so the caravan was very warm despite it being blustery outside. Talitha just found it so exciting staying in a caravan!

After breakfast, we all went for a dip in the swimming pool, something Talitha was especially looking forward to. The pool was cold and the changing rooms were in need of refurbishment, to be honest.

Talitha was still keen and spent quite a bit of time “swimming” but we opted not to take Ophelia in. Comically, the hot tub was cold too. At least we’d ticked “swimming” off the weekend’s plans so the three-year-old was happy enough.

We’d booked with Laurence going surfing in mind but it was so windy he decided against it. Another time. Instead, we layered up and went for a wander around Carmarthen. It’s said to be the oldest town in Wales. Much of its history has been maintained as we discovered, having an enjoyable poke around.

We had lunch at Diablo’s gastro pub in Carmarthen (the banoffee pudding was one of the tastiest things I’ve eaten in a long time) and picked up some bits from an amazing delicatessen in town for lunch the next day.

On the way back, we stopped to see Kidwelly Castle. It’s a wonderfully preserved Norman castle and a heart-stopping sight to behold. I only wish we hadn’t arrived when it was closing as I would have loved to walk around and properly explore. We’ll have to go back.

That whole area is rather exciting. We’d parked outside the old slaughterhouse and walked by stocks just outside someone’s house!

We got back to the site in time for the kids’ evening entertainment, Sparky’s Fun Time, so we thought we’d check it out. While we waited for it to start, we took a moment in the restaurant to watch the sun setting on the coast.

I got a bit concerned about whether the show would be appropriate for our kids when I saw all the overtly gruesome Halloween decor. I mean, there was blood splattered over walls and skeletons with flashing eyes.

Yet my three-year-old, who gets nervous watching Cinderella, was unfazed. I guess she’s not at the stage where she registers stuff like that. They played a few harmless games and she won a sticker.

It was all a little surreal, as you can imagine, complete with a giant blue mouse called Narky. The girls both seemed to have great fun despite the adults all finding it fairly insane.

For us, the highlight of the evening was playing Bingo while the kids went to the back of the room to do some colouring. My brother and my sister-in-law bought tickets to try it out but, hilariously, we all got into it. It was such a thrill!

Having not won (surprise, surprise), we went back to the caravan to cook a stir fry and get our girls to bed.

It was little annoying that the staff, though friendly, didn’t seem to be as informed as they could have been. For instance, the brochure said to ask for the password for park-wide WiFi but no one seemed to know anything about this and a hub wasn’t even coming up on our phones back at the caravan.

Not that this was really a problem while on our holiday. We just spent the evening chatting, watching a bit of television and playing a rather intense game of Monopoly.

The next morning, we opted for a visit to the “adventure playground” (it really is just a small park), crazy golf and a walk along the beach. I must admit, Talitha and I weren’t impressed with the park. It needs updating and some bits of it are actually broken. There were some older children there having a jolly time, though, so to each their own.

The beach was a lovely little walk. The site actually opens on to it and a few dog walkers were having a stroll when we went. Talitha busied herself collecting shells.

I didn’t get to go play crazy golf as Ophelia seemed a bit unhappy with how windy it was outside but the others tell me it was a good bit of fun. Talitha still hasn’t got what she needs to do with a club though.

We were meant to stay until Monday but checked out a night early because three of our party had work on, which was a pity. It’s a lovely area and, though we drove around a bit, I’d have like to explore more. I especially wish we’d got to go inside that castle. If we’re ever in the area again, that’s got to be done.

We finished up our delicatessen lunch back at the caravan and checked out.

Taking the big picture of the place, I think the gold plus caravan we stayed in at Park Resorts, Carmarthen Bay, was everything we could have asked for and it made a great base for the weekend. At £395 sleeping six for three nights over a weekend, it’s a decent price. However, the public facilities are pretty much all run down and in need of refurbishment. The area, though, is well worth looking around and a fine choice for a weekend away.

Park Resorts gave us this holiday in exchange for an honest review.