Pass me the non-alcoholic vino 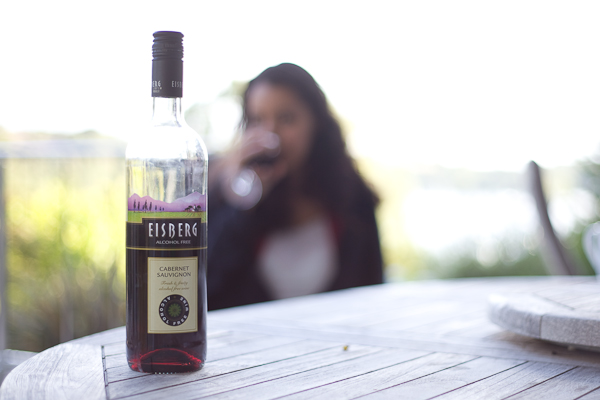 Ten years ago I sneaked into a bar with a friend, wearing very different clothes to what my mother had seen me leave home in. With uncertainty I had my first sip of alcohol. It was all a bit of a joke. I don’t even like fizzy drinks and it was rum and Coke.

Later that year or maybe the next, a cousin took me a nightclub and plied me with screwdrivers (vodka and orange juice). She hadn’t meant to. She’d had a lot to drink herself and kept forgetting she’d got me drinks. I bet she’s forgotten this ever happened but I ended up sitting in the middle of the dance floor until one of her friends took me out to the car.

Since then – apart from one or two occasions that I won’t go into because my mum reads the blog and I feel our relationship benefits from something left to the imagination – I’ve been a one or two units kind of gal.

When I moved out, drinking pretty much lost the allure of the forbidden. I still had my weekend glass of wine. My tastes had matured and that would do me just fine.

So you can’t blame me for not expecting to miss drinking. But good grief, I have. Try being pregnant over Christmas. I still slipped a unit here or there and I know the research isn’t clear and some women drink anyway but I’m not much of a risk taker. Sue me.

I’ve had even more reason to lay off on the drink since the baby got here. Aside from wondering whether I’m serving up unpasteurized white russians, alcohol ain’t great for supply and I don’t mess about with safety when we share a bed (see above about the risk-taking thing).

So I was up for giving a substitute a try when we went on holiday in Cornwall this summer. While everyone else cracked into the booze, I demurely poured myself glasses of a non-alcoholic fruity red Carbernet Sauvignon by Eisberg.

If I’m honest, I thought I’d give it go but didn’t expect to like it. Growing up in an almost teetotal household, we’d have non-alcoholic “wine” on special occasions like Easter and it would taste nothing like wine – more like fizzy, slightly off fruit juice.

Which is why I was pleasantly surprised. It smelled like wine. It even, reasonably, tasted like it. I mean, you couldn’t be fooled into thinking it was the real – as in, alcoholic – thing but Eisberg’s seriously made a good effort.

When I found out that it’s produced just like your regular still wine with the alcohol gently removed, that made sense.

It didn’t fully hit the spot for me but I missed what others were drinking a fair bit less.

I’d happily take it to the bathtub with me. Grief, my fifteen-year-old self would not be impressed.

This is not a paid post but Eisberg did send me a bottle of red wine to sample. Obviously, I’m not anything if not honest.

We were in Cornwall when I tried the wine. Hence, Hero is not in any of the pictures, regrettably.

Pass me the non-alcoholic vino