I’ve been wanting to share this carrier with you for ages (about a year now, in fact!) but am only getting to it now. It’s a podaegi, a carrier style that originated in Korea. Basically, it’s a blanket with two straps attached – a lot like a mei tai but without the waist strap.

It was originally a much-loved Storchenwiege Leo wrap my parents gave me for my birthday when I was seven months pregnant with Talitha. I then had it converted into a podaegi so I could carry two-year-old Talitha while I was pregnant with Ophelia.

The podaegi wrap conversion was done by Pouchlings and I’m so pleased with it. I opted for padded straps and have been impressed with the quality of the entire conversion.

Podaegis, or “pods” as they’re often called, allow for relatively quick wrapping. I needed speed when wearing Talitha while I was pregnant as I found I got flustered very quickly otherwise. I’ve enjoyed it now when I want to get Ophelia on my back as quickly as possible so I can do something with Talitha. The advantage of using a podaegi during pregnancy is that, as there’s not waist band, you’ve nothing to keep out of your bump’s way.

Also, the absence of a waistband makes the wrap versatile enough to tailor to the size of your baby. Hence I was able to carry Talitha in it when she was two years old (and I still could but she and I prefer to use our Wompat on the very odd occasion she’s carried) and I’ve been able to use it with Ophelia since she was a newborn. That said, I found it a real faff to use when she was floppy, so I mainly used a stretchy wrap and ring sling until she was around three or four months.

There is a learning curve involved in using a podaegi and care needs to be taken to tie it well. I realise I actually haven’t tied it as well I should here, now that I’ve seen the photographs! Yet, we walked around Westonbirt Arboretum for hours on Saturday and I was happily comfortable as was she.

Using a podaegi is less complicated than wrapping. For instance, you don’t have to worry about tucking the fabric under the bum and getting it to stay there to make the “seat”. So for those interested in woven wraps but a bit daunted by them, or for wrappers who sometimes need speed, a wrap conversion podaegi could well be a good option. 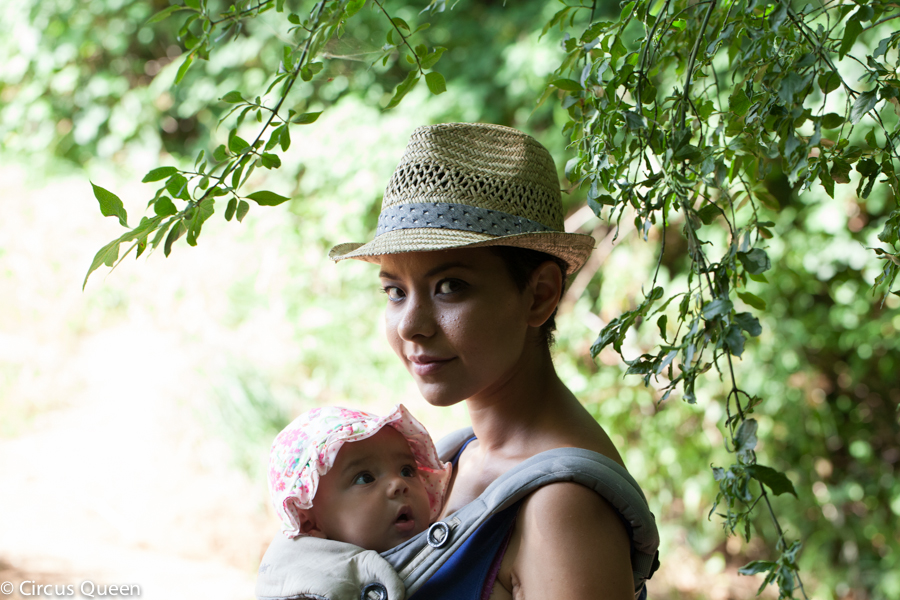 Ergobaby sent me their 360 to try and I’ve been wearing it pretty much solidly for the past month. Laurence has been using it in the evenings too. It was in time for all this hot weather we’ve been having, where reaching for a wrap just...