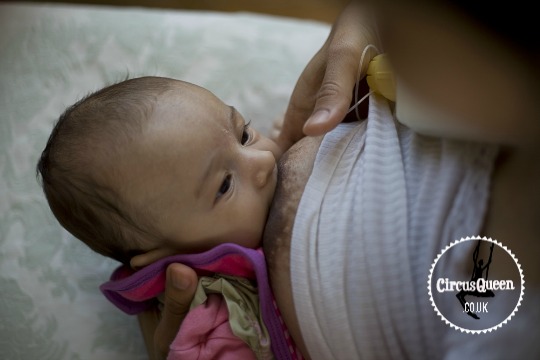 Thirteen months ago, when I first blogged about using a supplemental nursing system (SNS) also called an at-breast supplementer, a lot of people mentioned that they’d never heard of one and just assumed that the only options for feeding a baby were breast or bottle. I wouldn’t have known about it if not for the brilliant lactation consultant who supported us.

There are, of course, a range of other options for supplementing if the need arises – cup, syringe or spoon – but we felt these were too time-consuming for us when coupled with our pumping schedule. Everyone has to figure out what works for them.

I recently dug out my SNS from our garage because I’d met someone who needed to give her baby more milk and who seemed interested in exploring this option. It’s a bottle you hang around your neck or tuck in your top with tubes going from it that attach to your breasts. I’ve explained how it works in my SNS video. Life, Love and Living with Boys recently wrote more about what an SNS is and how it can help you breastfeed.

I’d not thought about it in a while but it occurred to me that there’s not a lot of practical info online about supplementing this way. It’s a real shame, actually, because using an SNS carries a wealth of benefits if other milk is needed.

You get to feed your baby at the breast (whether or not you’re lactating at all), your breasts are stimulated to produce more milk (so, good for addressing low supply or attempting induced lactation or relactation) and you avoid the risk of nipple confusion and reduce the risk of flow preference.

That said, it can be a real pain to use. I remembered this vividly while chatting with the woman I was lending mine to. So, I got online and asked a few people to share their practical tips for using an SNS with me. I also looked through a few blog posts written on the subject and threw in some tips of my own. Here’s what came together.

The neck of the SNS is small. You need a really narrow bottle brush to really get in there with some hot soapy water. To clean the tubes, fill the bottle with hot water, stick the cover on and push the water through the tubes by squeezing the bottle. Then sterilise the whole system. Annoyingly but importantly, you must do this before each use.

– mixed bag of all sorts  (She said this on Twitter but her post linked here offers lots of info about at-breast supplementing so I recommend it if you’re considering giving it a go. I’ll be quoting it below)

“Press all the parts together carefully or it leaks. It’s not about screwing it tightly but about making a good seal.”

-Laurence, my partner in crime, on using a Medela SNS

Such a man tip but a really useful one. I’d add that if leaking really is an issue then you can stand the bottle upright somewhere at or above your breast level. For some people a table works but I’ve seen others tuck it upright in their bra. I wish I’d thought of that at the time.

“When getting baby used to the SNS, make sure the milk in the bottle is warmed up to body temp. If its colder, they may get a shock when the supplemental milk reaches their mouth and keep pulling off the breast. Feel the temperature of freshly expressed milk with your wrist or lip to get a sense of what temperature you’re going for – it’s a little warmer than you might expect.”
– A Mummy Too

As with most things, this will depend on your baby. My daughter never minded what the temperature of the milk was, except at night. Remember, though, that formula has to be mixed with hot water for safety.

“Feed from both breasts without the SNS, then start again with the SNS. Get your latch checked too. Good latch is vital.”
– Lucy, BAMBIS peer supporter

I think this is key because you want to make sure the baby has drained whatever milk she can from the breast before taking the supplement. You also want to make sure you’re getting the full stimulation of a good latch so she’s not using the tube as a straw.
“I don’t tape the tubes down as that requires more time and exposure. It is a little tricky to position it right, get his mouth open wide and latch him on with out feeling like I’m “hanging out there” for longer than is socially acceptable. With time and practice its gotten way easier to use.”
– Dana, Breastfeeding Mother-to-Mother

I very quickly abandoned the tape as well, just because it was one more thing to have to do. Instead, I held the tube on the bottom side of the breast and let my baby latch on from beneath in the football or rugby hold.

“There are different thicknesses of tube, and working out which one was best at each stage was a process of trial and error: as he got older I thought it was logical to go for thicker tubing to get a faster flow which he could then cope with, but then I realised he got used to that and was more fussy about sucking from me without the SNS (i.e. without the artificial immediate let down of milk), and I reverted to the thinner tubes.”

– mixed bag of all sorts

This is why I mentioned above that using a supplemental nursing system reduces the risk of flow preference rather than that it avoids the risk. We found the same and had to stick with the thinnest tube in the end, otherwise she was to unhappy at the breast with its slower flow.

When I first started using an SNS, I felt like I couldn’t leave home because of how often I needed to pump and because I couldn’t imagine how I’d manage to use it discreetly. I started by only using it in women-only meetings where people might be more supportive.

Eventually, I figured out how to get everything set up underneath a big jumper so all people saw was a woman feeding a baby, rather than all the tubing that went with it. Admittedly, I eventually used bottles if I needed to supplement while out because they were easier though I did have to go back to the SNS because bottle use making her fuss at the breast.

We got to a point where we no longer needed to supplement but had I needed to, I may well have chosen to continue to do so at the breast.