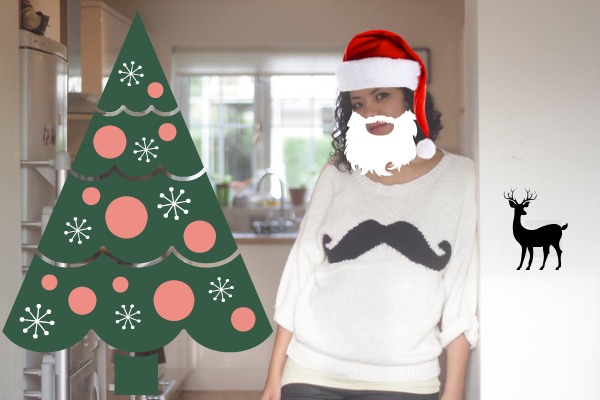 It kind of surprised us this year that we’d have to think about Santa Claus. We’d given it very little thought and pretty much expected it to be something that was at least another year away. Of course, it just didn’t work out that way. My two and a half year old saw him everywhere and wanted to know who he was. I started off telling her that he was someone who liked Christmas a lot.

Then she one day told me that he was bringing her presents. I was amused that she’d understood this having overheard it or been told it somewhere and decided to go with it. She’ll see him at Westonbirt Arboretum later this week and her stocking presents will be from him (the best gifts – or what we think are the best, anyway – will be from us). The question, though, is about how far to go with it. That’s no doubt something we’ll fine tune in years to come but, for now, we’re just a bit cautious for a few reasons.

One of the biggest things that puts me off about Old St Nick is that he’s used throughout the month of December as a way of trying to get children to behave. It’s unmissable in the songs about him that he’s watching you so you better behave if you want him to come by this year. Actions and consequences make sense to me but I have to say that I really don’t get the whole threat/bribe thing. It strikes me as a bit weird. For one thing, I can’t understand how it really works with children under the age of five to have such a long term goal to “be good” and control their impulses for.

Even if it does work, I’m not so hot on the idea of motivating them with a reward. Do this and you will get presents. And I’ve seen children get unbelievably worked up out of fear that they haven’t been good enough this year. I guess, for me, I’m also put off by the fact that this is the picture of God a lot of people have – he’s, at best, a benign old man who’s nice to believe in and who’s love is conditional. That image doesn’t make sense to me either.

But what about the imagination? Isn’t it healthy for children to exercise their imaginations. Isn’t believing in Santa Claus just a part of that? I think there are levels of belief. I “believed” in Santa Claus growing up but I also had no epiphany where I stopped believing. Part of me always knew that it was a game and that believing was a part of how we played. Perhaps this was because my parents never made a big deal of Santa and were always so obviously half-serious in talking with us about him. I do think it’s a bit of fun and that that’s an important part of childhood but I’m just cautious about the line between imagination and faith. I’m wary of making too strong a case for Santa I know isn’t real if it later causes her to wonder whether I’ve lied about something really important.

I know this isn’t an issue for everyone but for us, Christmas has a very specific focus. It’s when we remember how God broke into our reality and touched mankind in a mind-blowing way through Jesus, and when we look forward to the fulfilment of His life-changing promises, both those for now and the future. So, Father Christmas does seem a wee bit of an unnecessary distraction from something that’s already exciting. Not that I think he has to be at all. I think you can have a little fun with the whole Santa thing and still stay focused on what Christmas is about. In The Lion, The Witch and The Wardrobe, Father Christmas celebrates Aslan’s return to Narnia. In a similar way, he can be part of our celebration without becoming central to it.

I guess the worry is that there is just SO much of him everywhere that if you’re not really into it, it can feel a bit overwhelming. It sends children the message that he is the focus of the excitement. I understand that if you’re not a Christian, that might not be as much of an issue but as I am, it makes me think about how much reminding I need to do in order to balance that message.

I’ve heard people say that the idea of Santa Claus is one to be preserved because it reminds children of how important giving is. I kind of wonder how true this is, though, when so much about Santa is about what you’re getting. The wish lists detailing everything you want, the stockings laid out with care, the excitement about him coming so that you get presents… The “gimme” feel of it all really scares me, as much as I revel in watching my child enjoy opening presents.

We’ve been buying and wrapping lots of presents for other people this month and Talitha’s found it so exciting. Still, even now, she keeps asking when she’s going to get her presents. And all the ads we see around us are encouraging her to do just that. They tell us that Christmas is primarily about having a good time ourselves. Again, it doesn’t have to be so but it does take some thinking and a touch of caution to prevent it from going that way.

For us, the biggest thing is that we don’t have a strong connection to Santa Claus from our childhood memories. We both remember feeling that Christmas was a magical time but not particularly that it was all about St Nick. In fact, it had a lot more to do with our own families and with our parents in particular. So, we simply lack to drive to make a big thing of that jolly old elf. This may change over time – who knows? – but perhaps it’s more natural to us, personally, then, to find other creative ways to make Christmas special for our children.

I’m fully aware that every parent is going to tackle the Santa thing their own way and I’m not suggesting that there is any one way to do that. I may even feel differently about some or all of this in another year’s time. For now, this is where we’re at – giving him a half-nod but slightly leaning toward disinterest.