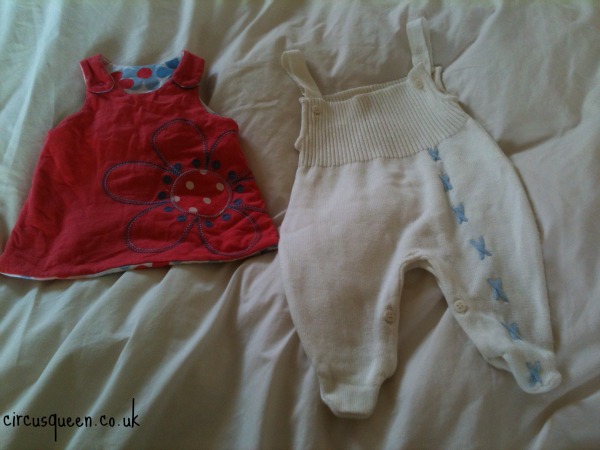 Last Thursday afternoon, I shifted the duvet off two-year-old Talitha’s chest. She shuffled a bit then fully woke up, smiling at me. “Did you have a nice nap, baby?” I asked her. “Yes,” she replied then returned, “Nice nap, Mummy?” Actually, though I’d spent a portion of those two hours in bed with her, for most of it I was rushing around packing our bag so we could leave as soon as she awoke.

For the rest of it, I did what I’ve been doing so many nights for the past six weeks, lying in bed, worrying and looking things up on the Internet. I didn’t tell her this, of course. I just nodded and told her we were going to see the midwife. “Do you remember what she’s going to do?” I asked her. She said, “Yes, look after baby in Mummy tummy.”

I’m just over ten weeks pregnant and I’m not sure why I’ve waited so long to mention it here, considering that I found out at four weeks, just as I had with Talitha. It’s made blogging awkward. There have been a lot of paranoid moments where I’ve been torn between being concerned that I’m letting slip a hint and just wanting to come out and celebrate it. We are very excited. This is a longed for baby, due – they say – in late February but I’m being very vague and keeping my eye on March, considering how late Talitha was.

Mostly, it’s not felt real. Perhaps, I’m just too busy with Talitha. Then again, if I wasn’t pregnant, I’d think something was dreadfully wrong. I have never been this exhausted in my life. Suddenly, I’m grateful Talitha takes a 2-3 hour nap in the day, because I desperately need it. Once, I begged her to take it early and wound up locking us into her bedroom and going to sleep while she played with toys and looked at books. I woke up to find her cuddled up, sleeping next to me. I guess she decided sleep was a good idea in the end. Another day, she asked: “Mummy tired?” “Yes, baby, I am.” She then escorted me up to the family bed and instructed me to sleep. I napped for twenty minutes while she spent the time flipping through magazines, sitting beside me on the bed. Miraculous.

I am so grateful not to have the morning sickness I had with her. I’ve had a fair bit of queasiness but nothing like what I experienced in my first pregnancy. In fact, I’ve only had one episode of nausea where I had to drop everything and thankfully it was on a Saturday so Laurence was around.

Even without morning sickness and exhaustion, my breasts would have given it away. I’d only just started fitting into my pre-pregnancy bras when they started growing again. I’m almost out of them once more. Breastfeeding has also become a bit more challenging. We’ve had to make some adjustments. More on that in a future post.

The other thing is that I have a noticeable bump, belly button flopped out and all. Laurence is a tad worried we’re having twins. Everyone assures me you’re just already stretched out the second time round.

It’s such a mix of emotions this time. I guess I was a bit naïve before I had my first child. It’s difficult not to be. I couldn’t have known just how my life would change. I knew little about birth, less about breastfeeding, nothing about the million ways having a child carves your identity. My life is so much better for knowing Talitha. Yet, that’s such an inadequate way of phrasing what’s happened here.

This time, I worry and I relax. I worry about having another traumatic medicalised birth. I relax knowing that we got beyond that experience and would get beyond another. I relax having met many other mothers and heard more stories which have bolstered my belief that it could be different. I just need to learn to trust my God, trust my body and not get hung up on anything that presents itself that I cannot change.

I worry about breastfeeding. Was it just a late-snipped tongue-tie? Why did it take three months of pumping and supplementing and more months of taking Domperidone to rebuild my supply? Could there have been more going on? Why did she never learn to latch well? I still have to adjust her even now. I am not convinced that if I got a plugged duct today that she’d clear it any more effectively than hand expressing would. What if it’s that hard again next time, except with a toddler in tow?

Then again, what if it’s easy? At any rate, I know so much more now. I know what to expect. I have a network of peer supporters, breastfeeding counsellors, lactation consultants and informed mothers around me. Yes, it could be difficult again but either way, it certainly would be different.

The fact that these worries play on my mind as heavily as they do makes me think that I haven’t yet awoken to the reality that there is a new life growing inside me, a new person to fall in love with. I look at Talitha and wonder how my heart could expand to love another as much as I love her. And yet I know that this is what mothers do, what I will do. I commit my fears to God and thank Him for entrusting me a second time.

I want to thank you too for continuing to walk with me on this journey, sharing your stories with me and listening to mine.

PS: I called Talitha “the creature” when I carried her. I have no idea what to call this one. Any ideas?