Christmas is often sold to us as a time of togetherness. Perhaps this has a practical function, especially in cold climates where dark, frigid days are prone to leaving us feeling disconnected and less energetic.

But “sold” is the operative word when commercial entities max on our natural longing for real community. We are encouraged to overspend in order to connect or to buy distraction as a plaster for our pain.

Yet because it’s a time where we’re conditioned to think about gathering our loved ones or being gathered, December can open up a lot of revillaging opportunities, so we can walk a little closer with others to discover and sustain life giving connections.

I’ve put together seven ideas for building community during the festive season. Christmas is the festival that reflects my own experience but I’d love to hear from you about what would work in your own context.

Everyone will vary in how challenging they find these ideas. They’re a lot to do in one month so I’m not suggesting that these are for everyone but I do think there is merit in all of them and I’d love to chat through the challenges they present.

1. Give yourself lots of pockets for practising mindfulness

Reaching in perhaps isn’t what comes to mind when we’re talking about reaching out but the energy and, sometimes, bravery needs to come from somewhere.

Radically accepting ourselves makes it easier to do the scary things and to make time for things we know will improve our lives because we know our own value.

I think it’s really important in a busy month to carve out lots of little pockets in the day to non-judgementally notice what we’re feeling, especially if that’s loneliness, frustration or fear.

Maybe as you look through the rest of this list, you’ll have strong reactions to some of the suggestions. Observing what you feel and gently asking yourself why – without imposing a value judgement on the feeling – could be a start.

2. Invite your neighbours over for a low key mince pie party

Insert black cake, gingerbread men or whatever your seasonal treat would be (I certainly didn’t know what mince pies were when I moved to the UK, nor did I initially care for them) but you get the idea.

Laurence lived in a shared house many years ago where they did just this: invitations dropped off to the neighbours on the street for a two-hour slot, lots of mince pies in the oven, kettle on and a few outside friends invited along for support.

We’re planning to do it this year if we can work out when. We figure that whoever comes, comes and any extra mince pies can go to the food bank. And if no one comes, we’ll have a relatively tidy house to enjoy. Even the act of extending an invitation has the potential to grow and heal us as long as we can hold the idea loosely.

There is something about combining shared vision and practical action that can powerfully connect us. We can find it in volunteering and in activism.

Some years ago, Laurence, Talitha and I spent a Christmas Day helping a church put on dinner for people who found themselves alone for the day. It was the weirdest and, in many ways, one of the most wonderful ways we’ve spent Christmas.

Planning with the team as well as spending time with the guests helped us get outside ourselves at a time when we were going through some difficult stuff as a family. It also meant that we went that bit further with some people who we knew more casually.

Activism also has an important role to play in putting us in touch with others. It enables us to be a part of a cultural shift that fully accepts we’re in it together. This month, climate strikes are being organised for Black Friday as a way of gathering people to stand up to the capitalist, consumerist destruction of the earth.

Joining others to face the climate crisis could mean authentically dispelling the mental and spiritual fog that the Christmas season seems to cast over everything, ironically disconnecting us from ourselves, the natural world and each other.

4. Seek opportunities to sing with others

Singing is naturally socially cohesive and Christmas is a relatively easy in to singing in a group because many of us are familiar with carols.

Whether it’s classics in a pub, a community choir, a carol service or adding a singing element to a group you’re already part of, singing is a way to step in closer a little faster.

Eating with people can be a simple way of sharing experiences outside of the nuclear family unit. We try to regularly have meals with friends for that reason.

Doing bring and share takes it down a notch so the pressure’s off and (hopefully) no one feels like they have to put on a show. It also means you avoid the expense of eating out, which is an obstacle for many of us.

6. Borrow instead of buying

There was a time that we would ask our neighbours for something we didn’t have, whether it was a cup of sugar for making a cake (obviously you wouldn’t give this back though maybe you could share your cake?) or a ladder for putting up Christmas lights.

The culture of independence which is hellbent on isolating us is the same culture that tells us it’s worthier to go out and buy something than ask those in close proximity for help. There’s a certain synergy in the very act of asking.

The end of the year is a highly potent time to think about what we need to release from the past. Historically the Yule Log (not the cake) involved a ritual of communally letting go whatever is keeping us from moving forward.

I think even if you find your own ritual around doing this in a solitary way, whether through prayer, journalling or something symbolic, the effects on your ability to reach out to others will be positive. But I do think there’s something incredibly nourishing about finding ways to do this together.

My women’s circle is meeting in early December and I’m currently thinking about bringing a creative activity that will involve meditating on letting go. Open to ideas if you have any! 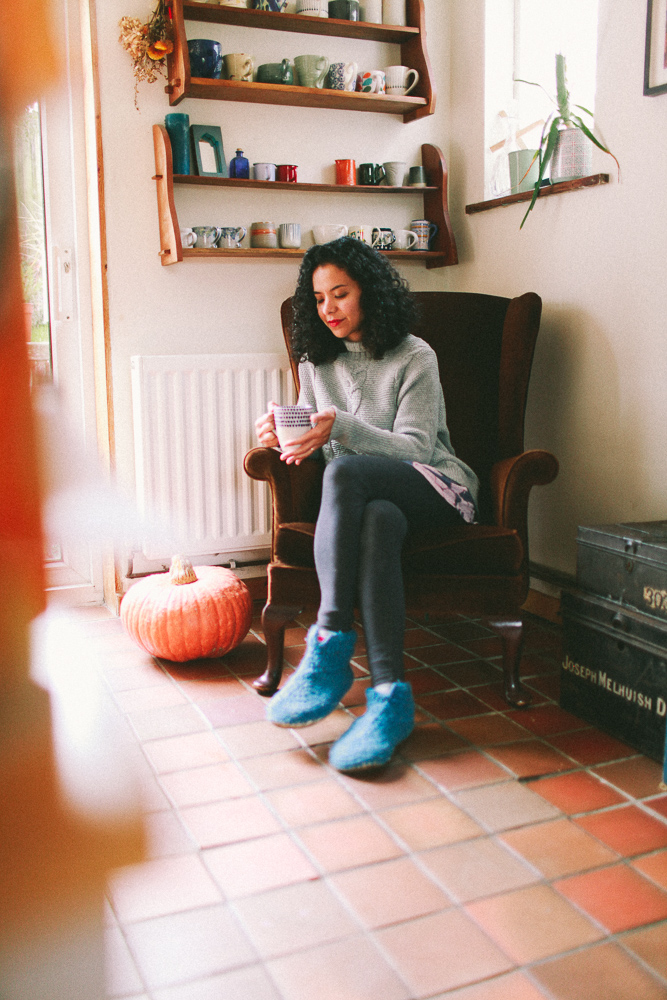 [image description: Adele sits in an arm chair, holding a mug] When my first child was a baby, someone close to me asked whether I thought attachment parenting was hard on mothers. I couldn’t deny that keeping our baby close and mothering her...