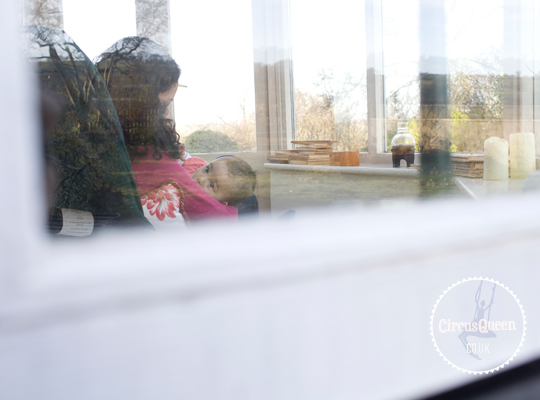 I feel privileged to be breasteeding my ten-month-old. It shouldn’t be a surprise as it was for the health visitor who visited us a couple of weeks ago. After all breastfeeding, particularly if your baby is under a year, is nothing if not normal.

But for me it is a surprise. A delightful one. With a tongue-tie and low milk supply, I was pretty sure our breastfeeding journey was near its end over six months ago. I’m glad we were able to keep going. These are some of the things I would have missed out on otherwise.

1. The distraction
It doesn’t matter how tired or hungry Talitha is. If there’s another sound in the room, that’s more interesting than my breast. Two sucks and she’s off. I’ve become skilled at speedily covering up. As if by reflex, she turns to feed again as soon as the nipple’s out of view. I love seeing how interested she is in the world.

I’m not even embarrassed anymore. It only irks me because I want to make sure she’s not hungry or tired.

It’s got to a point where I either have to go into a separate room to feed her or I just don’t bother to offer when out.

She fights her way out of a sling unless we’re walking. It turns out that’s the only way I can feed her when out – by walking. Bizarre.

All the more reason to cosleep at night. If it’s been a busy day she makes up for her missed feeds in bed. We both wake for moments, latch and drift back to sleep.

2. The gymnastics
I mentioned this in my Six things crawling brought into our lives. Not only has Talitha taken to crawling away from me only to relaunch herself on my nipple but she gets into the strangest positions. She has tried breastfeeding upside down, facing away from me, hanging off my lap, and standing. I have never seen the like.

3. The ettiquette
It completely caught me off guard when Talitha began grabbing my breast like a bottle and thrusting it into her mouth.

At first I let her because it was funny and didn’t hurt but recently I’ve prevented her from latching when she starts to do this. I cover up and explain that she must come close to mummy and be gentle. It doesn’t bother me and she never does it in public but I think it’s only fair that she learn to respect my body.

She’s beginning to understand, I think. This is a healthy early experience for our relationship.

4. The efficiency
Since she is baby led weaned, Talitha does not enough solids to displace most feeds. Some days she’ll feed four times and others, ten.

Other people seem far more concerned about this than I am. I couldn’t work out why at first. After all, breastmilk is the most important food for the first year of life.

Recently I’ve realised that it’s because they think it’s a huge inconvenience. But it really isn’t.

She isn’t breastfeeding for hours like she did as a newborn. Nowadays it’s a 5-15 minute job. I didn’t believe it in the early days when I was told she’d get better at breastfeeding but she really has.

5. The laughter
Breastfeeding an older baby is hilarious. It’s full of communication. During day feeds, she’ll sometimes pause to say something like “duh-dah-dah-dah-duh-dah- duh-dah”. I respond and she laughs. Then she’s on again, looking up at me, pausing momentarily to smile.

When she is across the room and fussing, I lift my shirt and wave my breast at her (I read about this in Breastfeeding in the land of Genghis Khan). It’s the best joke. She cracks up everytime. Squealing with delight she hurriedly crawls toward me, gets into my lap and settles, whatever she was fussing about forgotten.

6. The relief
She’s got a cold at the moment that she’s clearly drained by. It’s taken her appetite. I’m just relieved to know that even though virtually everything I offer her is getting rejected right now, my milk keeps her fed and watered, and is gentle enough to still be wanted.

7. The transition
I got stressed out recently about Talitha’s lost interest in bottles and cups of milk when I’m not around. I’m leaving her to go to blogging conference Cybher (I’m still looking for a sponsor, by the by) next month and wonder how she’ll fare breastless for thirteen hours.

Having spoken to a few mothers and thought it through myself, though, I realise she’ll be fine. Even if she won’t have any milk in that time (and I’m sure she will), she eats food and drinks water and can make up for the rest when I get back.

Getting my head around that has meant coming to terms with the transition we’re making. My daughter is growing up. She’s not solely dependent on my body for nutrition anymore. Her need for me remains strong but is evolving.