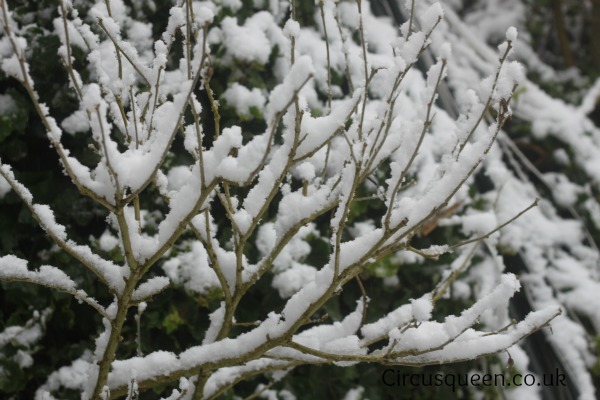 I was gloomy about the forecast for snow. Snow is coooold. And it turns into ice. And I walk everywhere.

At least we’re not living up a treacherous hill in Brighton anymore. One year Laurence went to India for three weeks and ice pretty much marooned me in the house. All I can think is there must’ve been a lot of toast.

“It’s a photo opportunity,” Laurebce encouraged, “You can take pictures of Talitha in the snow.” Well, this was a sort of comfort. She’d love the snow.

So it finally fell in Bristol. Talitha looked out at it and kept saying: “Wow!” When I told her it was snow, she said: “Wow! Tuh-know!”

Snow meant Daddy came back from the train station discovering that all trains were cancelled. It meant he could have pancakes for breakfast with us before driving in.

After he was gone, I got her suited up for snow fun. Then we ventured out in it and I set her down.

Crunch, crunch, crunch. She tried sloshing it with her feet then shouted: “Yuck!” She lifted her arms for me to pick her up so I did.

“Don’t you want to play?” I asked. “No!” she said, emphatically. I tried putting her down over and over but she would whimper each time.

In the end we did a walk through the garden in a ring sling and that was that. Snow was yuck.

Of course, the next day, Laurence managed to get her to do this:

But I laid the groundwork for this. Right?