So far with siblings 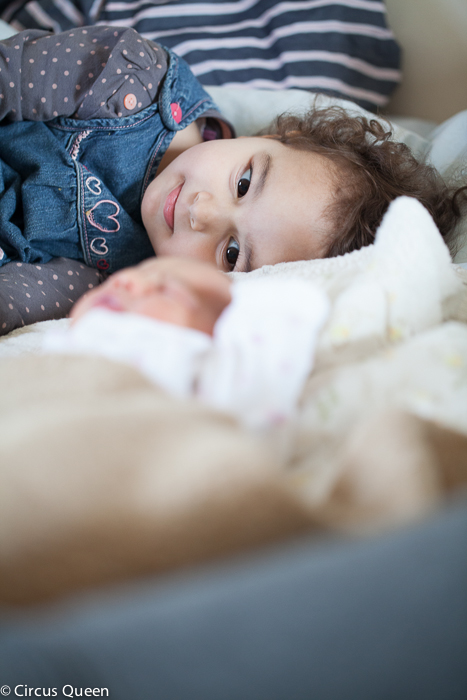 While pregnant with Ophelia, I wondered a lot about what impact she might have on her big sister, Talitha. Would it be love at first sight? Would Talitha feel jealous? Would she feel that her place as the baby of our little family had been usurped? Would she ignore her, finding her boring? Would Ophelia’s eyes follow her everywhere as Talitha’s had older children when she too was a baby? It just wasn’t possible to imagine it.

It wasn’t possible to imagine having another little human in our lives, let alone conjure up how the changing network of relationships in our family would operate. I’ve mostly been surprised by how much my little daughters love each other. Already. Instantly.

Talitha first met Ophelia in hospital. I keep explaining to her that Ophelia was born in our livingroom but as far as Talitha’s concerned, the hospital is where Ophelia entered our lives. I was wearing Ophelia in a stretchy wrap when Talitha walked onto the ward. Talitha exclaimed that she wasn’t in my tummy anymore, she was in a sling.

She found the whole thing terribly exciting and I found her bouncing around exhausting, overwhelming. I look at pictures from that day now and wonder how I could have thought my two-year-eight-month-old seemed so grown up. She was only a baby herself.

From that point on, the first person Talitha has wanted to see in the morning has been Ophelia, or “Effie” as she calls her and as we all now do. She loves to make her baby sister laugh, bring her toys and change her nappy. We play argue at least once a day over whose baby she is, mine or Talitha’s, and usually agree on my three-year-old’s prompt that we must share. She is keen to introduce her to anyone we meet: “And this is my baby sister, Ophe-ya.”

All this affection is reciprocated. Ophelia’s first smiles were for Talitha. As predicted, her eyes have always followed her. As soon as Talitha comes to see her in the morning, Ophelia tries to sit up, gurgling and baby chatting. She laughs most at her big sister and responds most to her baby signing.

It is not so simple, though. From the day we brought Effie home, Talitha was snatching toys off her. It didn’t seem at all premeditated. It was if she couldn’t help herself. We struggled to know what to do, wanting to avoid unnecessary conflict while teaching her to respect her little sister who was too young to care or even to see whatever Lamaze object we’d put in her Moses basket. Now, it’s clear we must mediate. Talitha still, almost out of habit, takes things off her but Ophelia, now eight months, is quick to protest the injustice of it all.

And while Talitha mostly tells me to feed Ophelia and has even told me off for getting frustrated with her (“You do not talk to Ophelia like that, Mummy!”), she does find it hard sometimes to wait her turn. There have been times when Ophelia has had to wait because Talitha’s need has been greater, more immediate or more quickly satisfied.

I’m sure there’s lots of arguing to be had in the future. Lots of helping them work through the complexity of sibling relationships. Lots of learning and navigating, myself! For now, here at the very start, it’s just a sweet thing to see my little daughters delighting in each other.

Already, eight months in, there seems something special between them, something impenetrable. Something I am not a part of. And that is a surprise, that they would love each other so easily. That they would just know that they are sisters.

Images taken by Laurence when Ophelia was two days old.

So far with siblings