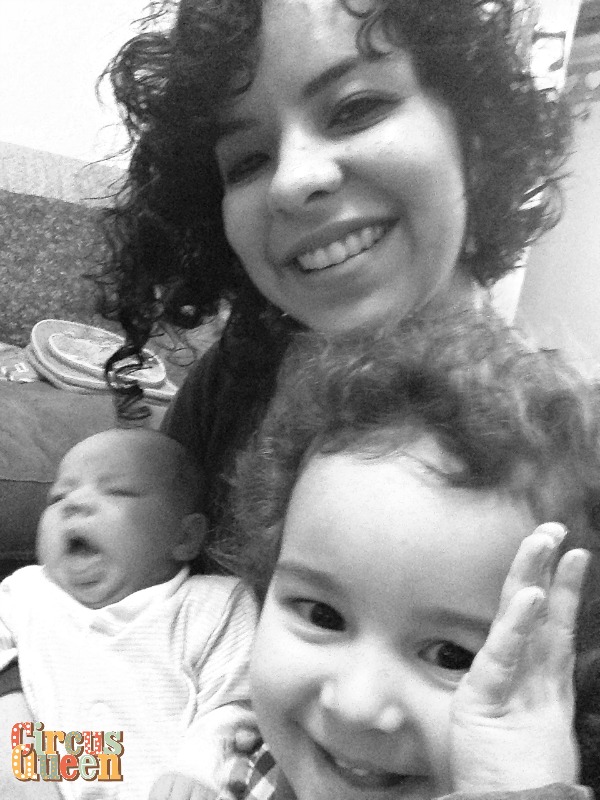 When Talitha saw Ophelia she exclaimed: “Mummy, your baby’s not in your tummy anymore! Your baby is in your sling!” I smiled and felt relieved that I still loved her this much – that she was still so little and beguiling to me.

While pregnant I wondered how I could possibly love another child as much as I did Talitha. Yet, in the fourteen hours since Ophelia’s birth, we’d bonded so well that I worried that when I finally saw my two-and-a-half-year-old again, I might feel…ambivalent.

In that moment, I enjoyed them both and wanted to gather them to me. I breastfed Talitha and was glad that it wasn’t suddenly strange.

So started our babymoon, this loved up baby bubble that the four of us have existed in for the last three weeks.

I could not have asked for Talitha to be more besotted with her baby sister. She covers her in kisses, “reads” to her and even comforts her in the car: “It’s OK, Ophelia. We’re nearly home. The Wheels on the Bus go round and round…”

Friends have been asking how Talitha’s adjusting. It’s really too early to tell. I think the one who’s finding it more of a challenge is me.

I’ve spent a lot of these weeks just snuggled up in bed, nursing Ophelia while Laurence and Talitha have been off having all sorts of outdoor fun. It’s been really easy for me to give in to my natural instinct to be all-consumed by my new baby.

And yet I have an older baby who still needs me. I’m having to consciously pull myself out of this newborn bubble to acknowledge, accept and meet those needs. I feel a little bit off kilter, to be honest.

It’s sometimes flustered me when they’ve both cried for me. I’ve even found myself resenting Talitha wanting to be breastfed when I’m breastfeeding Ophelia. It’s been OK with Laurence being around to distract and help but, as of today, I’m outnumbered with him having gone back to work.

And what a day it’s been. While putting on makeup in the morning, out of the corner of my eye I saw Talitha putting pillows on top of Ophelia, announcing that she was going to lie down on her! Later, I wasn’t really thinking when I changed Ophelia on the floor next to the sofa where Talitha was jumping. Of course, she fell on top of the baby. It’s just typical that nothing like this happens the full three weeks that Laurence is home then, THE DAY he goes back to work, it all does.

Part of me is ready for us to get on with life and start figuring out how things are going to be. I’m not (overly) worried about that. I’m just being realistic about it being a learning curve for us all.

My doula gave me some great practical advice about getting everything ready the night before, making sure to get out first thing and doing something more restful in the afternoons. It’s pretty obvious, I know, but I’ve realised I do need an action plan. So that’s what I did and it was a pretty successful first morning meeting friends for coffee.

I did, however, get really tired as the day wore on and Talitha and I started playing off each other’s negative energy. The more impatient I got, the less cooperative she got. Then throw Ophelia in the mix and the more tense we got, the more unsettled she was.

Thankfully, I’m already friendly with my slings so that gives me freedom to get on with the day with a baby who doesn’t like to be laid down for more than a few minutes (too right!). I’ve already been able to breastfeed while on the floor helping with puzzles or playing with toys so that makes me feel a bit more confident too.

But I’m remembering just how draining it is to be needed this much by someone and how important self-care is. Despite having a pretty good first day, all-in-all, I felt completely wiped out by the time Laurence got home (thank God, it wasn’t late as I thought it would be). I wanted a glass of wine, a hired cleaner and a bit of a stupid “woe is me” sob.

Instead I’ve settled for a few minutes chilling out in front of the computer, writing this with a baby still on me while Laurence puts our bigger baby to bed and munching on the chocolate coin I found in Talitha’s party bag (hoping she won’t remember it was there…). It’s an early one tonight. That’s for sure.

I’m also thinking that I might take out a magazine subscription* for Talitha, something like Story Box, so we have something quieter already prepared to do instead of trying to stumble upon inspiration when we’re both tired and a bit crabby. Goodness knows, I’ve lots on Pinterest and craft cupboards filled to bursting to give me inspiration when I’m lacking! It seems worth planning some of our activities beforehand, at least for now.

I know in my gut it will all settle – after all, so many of you have more than one child and it’s not the big disaster my melodramatic side worries it will be – but it just feels big, you know? I guess that’s not a bad thing. Going from one child to two kind of is big.

* Magazine.co.uk sent us a voucher to buy something for Talitha (or for me – I might consider this part of the self-care plan). They have just launched a Spin2Win competition to win money off Kindle Fires and magazine subscriptions. You can play the game and win here.