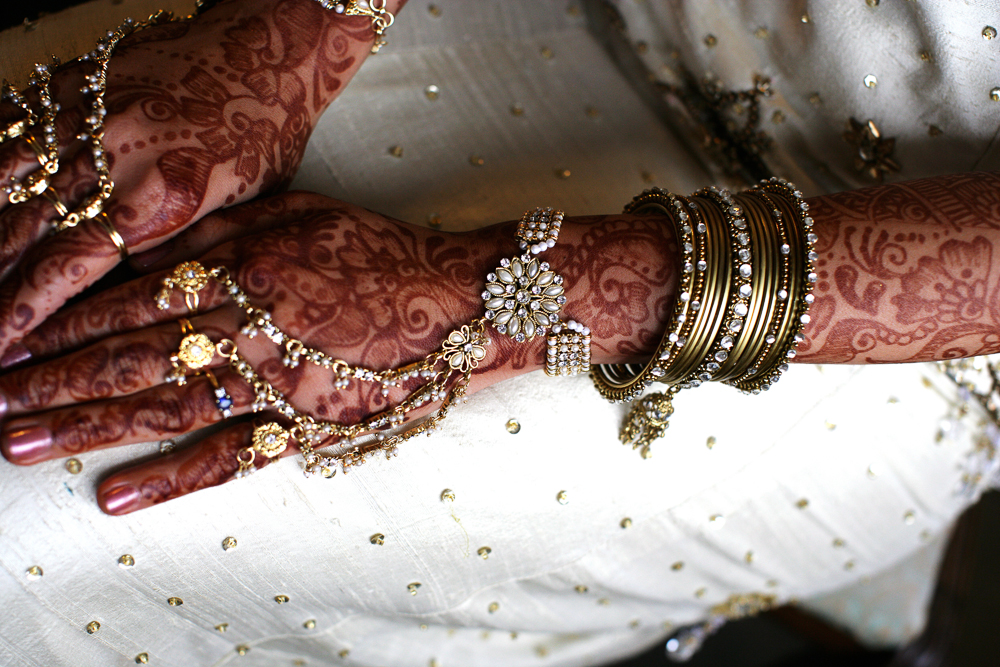 Tomorrow is our wedding anniversary. Was it really six years ago that my arms and hands were covered in mehndi, my lengha hanging in the cupboard, ready for a walk down a country church aisle? I barely slept that night or many of the ones before it. I remembered this when we wondered how one of Laurence’s cousins might be feeling in the lead up to her own wedding earlier this summer.

Looking back, I doubt I’d change anything about our wedding day. Perhaps we could have spent less money but then we saved in many areas with creativity (friends brought cupcakes, our families made Jamaican and Tribagonian food). We splashed out on a few bigger things which were carefully considered (the stretch marquee and reggae band spring to mind). It was a relatively thrifty wedding but putting it together forever changed the way I’ve viewed weddings since. I’ve become far more appreciative of the time, effort and money that goes into them as well as the privilege it is to celebrate with the happy couple.

Yet in all this talk about the cost of weddings, we rarely note that being a guest can be pricey too. Experian estimates that nearly 11% of people in a relationship have spent £800 on attending weddings. That blows my mind but by the time you account for hen and stag parties (especially stags – can anyone explain why they’re so often far more expensive?!), clothes, transport, accommodation, possibly childcare and a gift, I suppose it’s not that surprising, once you’ve been to a few. Many of my friends married young and I genuinely felt the squeeze attending weddings as a student and new graduate.

So it’s unsurprising to hear that Experian found that one in four people have argued with their partner about the cost of attending a wedding. In their Money & Relationships guide, they’ve included lots of helpful tips for couples seeking financial harmony such as:

Last week, I played wedding guest at London’s Duck and Waffle, invited by Experian to dine with a small group of bloggers and chat weddings. With a couple of them engaged and my own anniversary looming, it was a fun topic to take apart over Chef Daniel Doherty’s signature sharing menu. The meal featured playful delights such as bacon wrapped dates, roasted octopus and, of course, duck and waffle.

The restaurant is forty floors up, giving an enviable view of London. I must admit I struggled a bit with the glass elevator on the way up! Lunch there made me put it on my wishlist for my 30th birthday next year. We’re talking about possibly having a weekend away in London if one of our family babysitters is up for it, depending on what Ophelia is like at night by then. Failing that, maybe we’ll celebrate our seventh anniversary there. Seven. Now that sounds like a big deal.

Experian have put together the infographic below, detailing their survey’s findings on how much people are spending on attending weddings and how they’re coping with the cost. Is any of this familiar to you? Have you been to many weddings this year?

Do take at look at Experian’s blog for tips on how to prevent finances from becoming a pressure point in your relationship.

Thanks to Experian for working with me on this post

Who comes first, my spouse or my child?