Taking a child to the Rugby World Cup 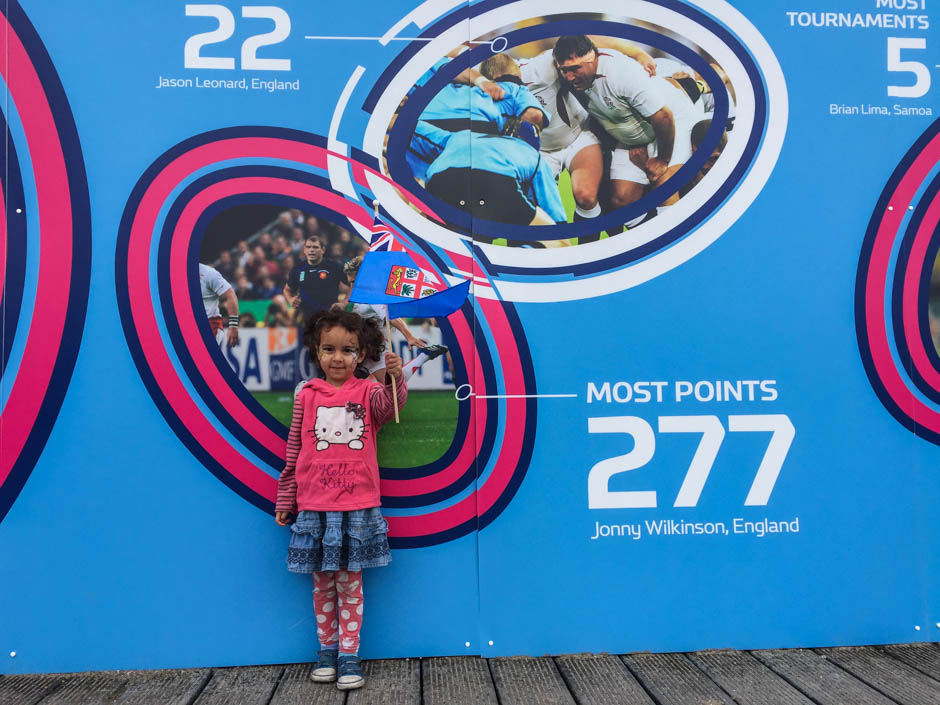 Last week, Laurence took Talitha to a Rugby World Cup game. Of course, I couldn’t resist asking him to blog about it here…

I was lucky enough to get a couple of tickets for Fiji vs Australia last week. I’ve been wanting to go to an England game for years, but the prices are reeee-dunculous, so I was quite pleased with the prices for the Rugby World Cup… I thought I’d take the 4yo.

A few folk, including Adele, where a bit worried about taking a kid so young. I think they’re imagining football fans and worried for her safety. The only thing I was worried about was whether I would be able to watch the whole game, as I’ve been gradually exposing her to sports on the TV and she’s not shown much interest. She’d rather we change the channel to CBeebies.

I wanted to make a day of it, and also not have any travel hassels, so I decided to drive. I reasoned that I’d rather she was asleep in a car than standing on a busy train. So we headed over to Cardiff from Bristol quite early.

The Daddy date started with fish and chips, followed by a ride on a merry go round.

The highlight in the weeks leading up to the game for Talitha was the idea of getting her face painted.

I think she was delighted I did too.

A few selfies around Cardiff.

And then we headed to the ground quite early. Probably a bit too early, but again I just wanted to get settled early. We made friends with some people sitting next to us and in those conversations Talitha made it clear she wanted Fiji to win the cup. I’m trying to help her to understand the difference between the game and the competition as a whole. I’m not sure she’s quite there yet. The crowd at rugby tends to not be segregated, and banter between supporters is never aggressive and always done with a smile, so it’s perfect for young-uns.

She loved the singing (national anthems) and the Fiji version of the “Haka”, the “Bola” I think it’s called.
She spent a lot of the game on my lap, and during the game I was commentating into her ear. Asking her to tell me who caught the ball at the line out. She would get very excited and wave her flag if Fiji won the line out, exclaiming, “Did they win?” In fact, if anyone from the BBC is reading this, maybe there should be a Kiddies Commentator option on the red button for all sports?

Just before half time she did get a bored, but the second half was a lot more fun for her as there where lots of Mexican waves, which she got really excited about.

She asked at some point in the game why no girls are playing. I think the exciting thing is that the women’s game is getting bigger and bigger. I can’t really imagine what it’s going to be like when she is older.

All in all I think it worked out, and she had a good time. I love taking them on daddy dates, and will definitely do it again. I enjoyed the game too, and loved it when the crowd started singing Swing Low Sweet Chariot, which says a lot about who was watching the game.

Oh, and download the Rugby World Cup kids activity printable we made here.

If you’d like to see more of what Laurence and the girls get up to (especially if you’re into outdoor adventures), check out his blog Chasing Wilderness and follow him on Instagram.