Taking a toddler to the theatre 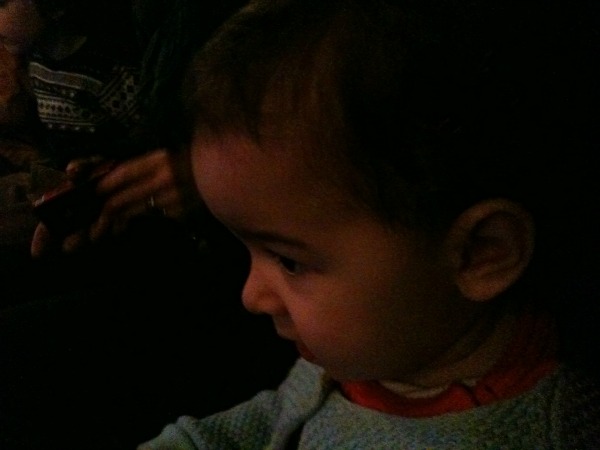 After a day of grizzling, punctuated by all-out tantrums (see last post for breaking news that Talitha is now a toddler) I dreaded heading to Bristol Old Vic theatre. Was this going to be some awful disaster?

The house was a mess and I’d run out of clean nappies. The latter nearly never happens to me, so frazzled was I. My unhappy toddler had spent a day red-cheeked and telling me that she felt wrong. I didn’t even bother to apologise about the domestic state when my mother-in-law came to pick us up.

But to the theatre we went. It was to be a girls’ day out: Grandmum, the toddler and mummy. We’d been invited by Bristol Old Vic to go see Hey Diddle Diddle. Excitement had been building for weeks.

They seated us up in the balcony which was probably a good job because if we’d been in the arena, Talitha would’ve no doubt wondered about. She’s not adverse to getting up in front once she’s settled into her surroundings. I doubt that would’ve amused during the Miss Muffet/Incy Wincy Spider tango. Knowing her, she would’ve headed straight for the fiddle stage left.

Truth be told, it wasn’t totally age appropriate. I knew that going in as Hey Diddle Diddle is aimed primarily at 3-6 year olds. So I wondered just what Talitha would get out of it.

She loved it. She sat contentedly in our laps the whole time, staring and drinking it all in. I did engage her by whispering “Look at —“, “Do you see that —” and “It’s a —” which was fine as it was by no means a silent audience.

In fact, that’s what must be the most charming thing about children’s theatre: the raw honesty with which such a young audience responds.

Shouts of “Open it!” and “Don’t open it!” mingled as a character looked over at the magical box all the nursery rhymes came out of. A psychological study could’ve been performed determining why some children warn while others goad on.

The show is cleverly and beautifully choreographed. The music is simple and bewitching. The script is hilarious and executed with strength. We enjoyed Hey Diddle Diddle as much as or more than Talitha did!

After the show, we three went upstairs to the restaurant for brownies and cups of tea. Talitha had a wander around and my mother-in-law and I gushed over how much we’d loved the whole thing. I can see already that the theatre has a permanent spot in Talitha’s Christmas traditions.

Taking a toddler to the theatre