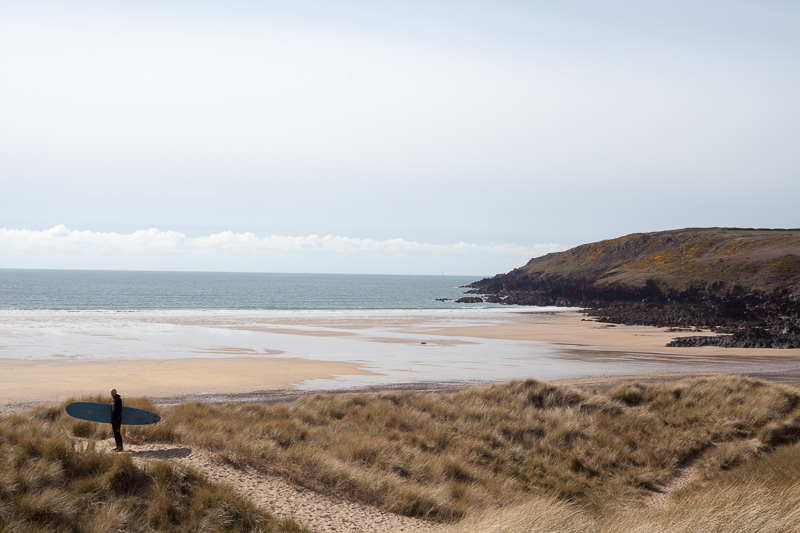 A few weeks ago we headed down to West Wales to stay at Bluestone National Park with Laurence’s parents. It was truly a holiday to remember. We’ve even made a little video to capture the special time it was.

We went in late March and, as you can see from how bundled up we were, it was freezing! Pembrokeshire is such a beautiful part of the world, though. If you’re going to be outdoors in cold weather, it’s exactly where you want to be.

Leading up to it, I kept collecting tips from friends who had been so we could make the most of our week there. Paying it forward, here are my ten things I think you should do if you choose to holiday at Bluestone.

Invite the grandparents
I was actually a bit nervous about inviting Laurence’s parents to join us for this trip, not knowing what it was actually going to be like. When we entered our lodge, I breathed a sigh of relief. It really did feel quite luxurious and there was just so much space! We could more than comfortably all settle in without getting on top of each other.

With the “village” nearby, complete with cafe and pub, we could easily have gone out for a drink and left the girls with their grandparents. I say “could” because when it came to it, we were too tired to be bothered! Romance is alive, eh? We did split up and let them go off with Ophelia at one point, though, so Laurence and Talitha could cycle in tandem and I could “try” to cycle (that didn’t really happen either).

Take your bikes
But, if you are the cycling kind, then do take your bicycles with you or hire some because the grounds are pretty for cycling around and nowhere really is that far away.

Hire a buggy
That said, it may be worth hiring a buggy if you have small children with you or anyone with mobility issues, if it rains or even just for the fun of it! The resort is car-free most of the time. We loved that. It felt safe, quiet and just a bit isolated.

Head down the big slide
For Talitha, the highlight of staying at Bluestone was going to the swimming pool! The pool area was massive, beaming with natural light, well-designed, warm and well-kept. We were pretty impressed. Talitha loved the wave machine and being carried through a trail by a gentle current. Ophelia was more a fan of the toddler pool. Laurence, however, went down the big slide, which apparently stops off at two pools along the way and I hear it was rather impressive.

Take your own pillow
As I said, we were impressed with the digs. However, I found the beds really uncomfortable. I think I’ve finally come to that stage in life where I need to walk with my own pillow, and possibly something to line mattresses with. My experience doesn’t seem to be universally shared, though, so it may well just be me! I ended up asking Laurence to sleep in Talitha’s room so Ophelia and I could get to the centre of the bed where it was a bit less springy.

Have lunch at Camp Smokey
There’s a stunning walk down to one of Bluestone’s eating joints, Camp Smokey. The food is sort of ranch fare, pretty tasty though the portions are a bit small. The log cabin feel can’t be beaten for charm, though, and we had fun roasting marshmallows on their fire for pudding. Do make sure that you use the loo before going down there as you’ll be port-a-looing it otherwise.

Follow a woodland trail
The grounds themselves are pretty and have a wilderness feel. It’s definitely worth getting lost one afternoon.

Go to the beach
I feel like this is so worth it, it needs to be said again. Go to the beach! Pembrokeshire has desperately beautiful coastlines. For Laurence, this means a chance to surf. For the kids, it’s an opportunity to play in the sand and explore rockpools. For me, it’s taking in the jagged rock, the fresh lash of the wind, the great expanse of the ocean. I’ve really come around to temperate beaches.

Roam around a castle
We didn’t do it this time around but there are quite a few castles in the area. A couple of years ago, we had a picnic in the grounds of Carew Castle. It’s truly impressive and you could spend ages there.

Check out other nearby attractions
The staff at The King’s Arms pub in Pembroke were keen to tell us about sights in the area. Had we been there for longer, we may have checked out Picton Castle or Folly Farm. Instead, we visited a National Trust property on our way back to Bristol.

It was such an easy place to be – a true break. In fact, we might look at going again when my parents next come over from Trinidad.

Thanks to Bluestone for inviting us to stay