That time I checked out Kiddicare at Cribbs Causeway 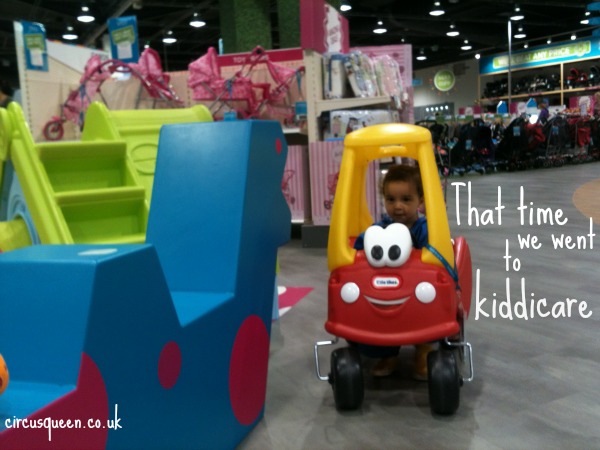 Last week Wednesday, I left my breastfeeding group in Shirehampton to catch a bus up to Cribbs Causeway for a blogger event I’d been invited to at Bristol’s new Kiddicare store. At the group, a friend effectively said that she didn’t think it would be my scene and I can see why. It’s pretty plastic fantastic over there. There are some genuinely lovely products in there too, though, and it’s an enjoyable shopping experience. Yes, I went as a blogger but couldn’t resist shopping in the end. For things I needed, I tell myself.

First look around the Kiddicare store

I spent quite a while in the baby clothes section. I’ve hardly ever bought Talitha any clothes, preferring to accept whatever we’re given second hand. However, I do tend to buy them for friends, which I did on this occasion. It was lovely to see Frugi there and to see that the Morrison’s line, Nutmeg, goes for bold, creative prints instead of sticking with the usual pastel blah, characteristic of many baby clothes.

Could have seen more of…

I lit up on noting reusable cloth nappy options. Lots of gorgeous Bambino Mio miosolos on view. However, the in-store range is quite limited. I only saw Bambino Mio and Waterbabies. I’d love to see more brands and styles there. The trend back towards cloth nappies is growing and one nappy doesn’t necessarily fit all body shapes.

The highlight of the afternoon for Talitha and me was the Kiddy Cooks CookieTots lesson. Talitha made a tomato soup which involved a lot of measuring and mixing. We cook together at home but usually it’s a case of me getting on with things and letting her join in when it suits me. In the class, she was very much the cook and she displayed autonomy in her role, really getting into it. When she got home, she was excited to show Laurence what she’d “cooked”.

I was really annoyed when I saw the Avent bottle that had been put in my goodie bag – not because I’m bottle adverse, because I do think bottles can have their place but because it was the first time I’d seen all the copy on their packaging. Phrases like “natural latch-on”, “The natural way to bottle feed” and “breast-shaped” are unsubstantiated by any evidence, frankly impossible and misleading to parents. On the side of the box is a testimonial by a mother of a two-month-old, which just seems aggressive marketing since Avent have gone for the youngest age they could get away with and still pretend to be breastfeeding friendly.

I’m sure Kiddicare’s PR reps don’t realise it but including this bottle in my goodie bag actually breaks the International Code for the Marketing of Breastmilk Substitutes: “Manufacturers and distributors should not distribute to pregnant women or mothers of infants and young children any gifts of articles or utensils which may promote the use of breast-milk substitutes or bottle-feeding.”

A part of me thinks “Well, none of the big retailers stick with the Code – I expect this” but, then again, that really isn’t good enough. I think it’s important for us to keep calling on retailers like Kiddicare to raise their standards. So, I will be writing to Kiddicare and Avent will then consider whether to contact anyone else.

EDIT: I’ve since received word from Kiddicare that they have removed bottles from all future goodie bags.

I was, however, most impressed by their car seat section. This is what I’ve mainly heard Kiddicare recommended for and I can see why. The sheer height and breadth of options was breathtaking. I wish I’d gone there for our stage one car seat. Instead of soldiering on for fifteen months with a car seat that fit our travel system (which we never used!) but was all wrong for our car, we could have been expertly led through a few options and made a more educated decision.

I actually got to test this part of the service while at Kiddicare as I needed to buy a second car seat for cars other than ours. We have a rear-facing stage two Britax which we’re so impressed with but I wanted to buy a quick and easy to plug in forward-facing car seat for occasional use in other people’s cars. I was impressed with the knowledge and friendliness of the staff (they didn’t know I was there as a blogger). There’s a nice computer system to make fitting appointments with the car seat team so you’re not left hanging about.

There was, however, a hiccup with delivery as the car seat was supposed to arrive at my house two days later, which it didn’t. However, Kiddicare were prompt and polite in sorting out the situation.

On leaving I had mixed feelings, as I often do leaving stores like this. I do think parents, especially new parents, are being sold things they don’t necessarily need but then, I’m realistic enough to know that they’ll probably buy them anyway.

The store is well laid-out, bright and easy to navigate. There are lots of pretty cool touches like screens that update in-store prices when the online prices change and bunting made from bibs. There’s even a little cafe with a play area and the calendar on the wall in the events room boasted lots of fun activities for parents and small children. As high street shopping experiences go, it’s a positive one. I have over the past three years gone into Kiddicare’s competitors for one thing or another over time and I genuinely think I could have done better to go there instead, stress-wise.

I was invited by Kiddicare Bristol to a blogger event which included a Kiddy Cooks lesson, a guided tour and a goodie bag. The team were lovely and I did enjoy myself but, as always, I only give honest opinions.

PS: Apologies for the blurry photography. It was a busy day and I forgot to take my camera. I currently have a practically ancient iPhone 3G. Must upgrade.

That time I checked out Kiddicare at Cribbs Causeway