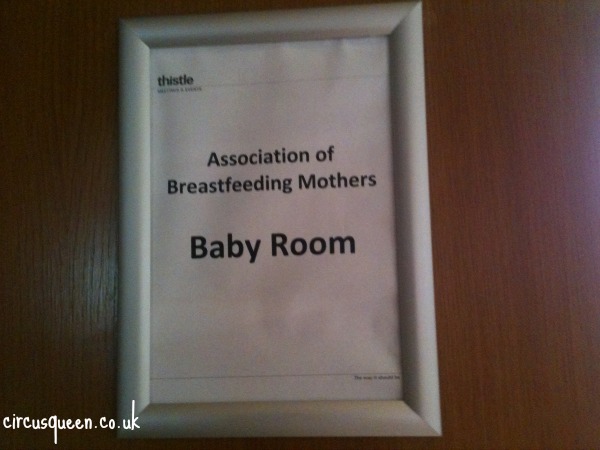 I went to a breastfeeding conference on Saturday. It was absolutely the last thing I felt like after a week of moving house and just before second birthday celebrations but oh how I’m glad I went. I’ve come away re-inspired and challenged. It’s made me love women more. Actually it’s made me love men and children too. Perhaps I’m still awash in all that oxytocin from the Association of Breastfeeding Mothers (ABM) Conference.

First, we got to hear from Gill Rapley, the Baby Led Weaning champion. My two-year-old-on-Tuesday is far beyond the stage where purees would make for expected conversation. So I admit that baby led weaning versus spoon feeding is just not something I personally think that much about anymore. Yes, it comes up as a topic in breastfeeding groups I support or attend but I’ve not had much opportunity to think about it in any great depth recently. Yet Rapley made so much sense that it got me fired up about the topic again. Here are some highlights:

– No other mammal does what we do. We puree because we start solids too early.
– Freedom to make choices about food encourages babies to grow into autonomous people.
– Babies with tongue tie can work out for themselves how to manage food around their restrictions.
– Mesh feeders are gross. And weird.

Next speaking was a lactation consultant (IBCLC) and adoptive mum who asked a question that comes up now and again but always provokes: Would you prefer to breastfeed with formula milk in your breasts or bottlefeed with breastmilk?

At this point, I look at my notes and realise I barely took any during this session. For one thing, some of the advice for relactation also applies to women trying to increase milk supply so it’s stuff I’m fairly familiar with. Also, her personal story had the room in such grip, the audience was more likely to be crying than scribbling.

Kim (not her real name) adopted her daughter when she was eight-months-old and went on to express for her for eighteen months. The baby wouldn’t latch on to the breast.

Quoting from From Fear to Love: Parenting Difficult Adopted Children

, she talked bout the importance of sucking in general and, ideally, sucking at the breast, in making up for lost early babyhood experiences.

Anyway, for a long time it didn’t seem like breastfeeding was going to happen. She put a bottle teat on the breast and used an SNS with water in it when her daughter was almost two, used nipple shields. It sounds like she was giving a lot of stuff a go but nothing was really happening. Finally, her daughter latched on, totally on her own. Kim was so surprised she dared not move in case she broke the spell. A few days later, she was getting milk. When Kim told us that the baby said, “Mummy milk”, the feeling in the room was incredible. She’d taken us into that re-parenting moment with her.

So, going back to her opening question: throw the value of mothering at the breast into the mix and you’ve really got something to think about.

Formula marketing has a real effect on breastfeeding rates and doesn’t offer women any real information. In fact The International Code for Marketing of Breastmilk Substitutes (often known as The Who Code) doesn’t allow any marketing of breastmilk substitutes. For example, infant formula and follow-on milk should be completely separate in stores. All that stuff you see online, from the Cow & Gate Facebook Page to Aptaclub, breaks the Code too.

There are so many things we can do. For a start, report violations to Baby Milk Action and the relevant authorities, spread the word and boycott Nestle.

This is where the ABM went all techie on us and brought in Professor Helen Ball of Infant Sleep Information Source (ISIS) via Skype. She looked at the factors that come together to raise the risk of the tragic and baffling Sudden Infant Death Syndrome. Bedsharing has come under fire in the news recently with improper reporting of the Carpenter research in the newspapers. The issue is not as uncomplicated as its been made to seem. For one thing, stopping bedsharing could discourage breastfeeding, which then raises the risk of SIDS, or leads to parents falling asleep in even more dangerous locations like a sofa.

It was quite a heavy talk with a lot of data that falls outside the scope of this blog post, considering how long it is already! I encourage you to look through the ISIS website though. It’s very accessible.

Breastfeeding in a Sexist world

The day was rounded up by the hilarious Kate Evans, cartoonist, activist and author of The Food of Love: Your Formula for Breastfeeding Success – my top gift for new mothers. She explained the “othering” of women in a society where men are considered “normal” with the term “Smurfette”. In The Smurfs, the Smurfette is the token woman a trend carried through the media everywhere. She also talked about The Bechdel Test, which I’d seen explained before in this video by Feminist Frequency:

Breastfeeding is a feminist issue. The sexualisation of breasts is symptomatic of a culture in which girls and women are pressured to pander to the male gaze. What’s worse, when we push women aside, we’re also pushing children aside. As Evans pointed out, it’s cheaper to bottlefeed a bunch of babies in one place than give every woman the time and space to breastfeed.

But what took the cake for me in her talk was a quote from a 19th century physician who believed that breastfeeding beyond nine months would make women deaf and blind. I’d wondered why I’ve kept needing to put the volume on the TV up recently.