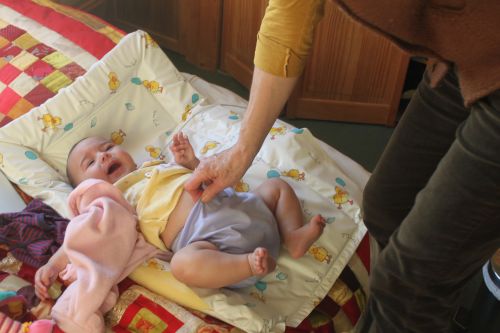 I wasn’t sure if I’d get the chance to complete this challenge this week as it’s quite random to ask a friend, “Would you like to change a nappy?” Generally we just do them all ourselves. I’ve not yet got to the point where I leave Talitha much with anyone else either.

Especially bless her because when she’d got back from their walk in the park, Talitha had done a poo reflective of the berries she’d eaten the day before. Too much information? Never.

The dear woman just went ahead and cleaned up the stinker – the poo I mean. I’d never call my darling child a stinker. Unless I’m running on less than four hours sleep and she’s screaming her head off at least.

She also agreed to try out the Bambino Mio Miosolo.

Interestingly, she first put the nappy on back-to-front. I have no idea whether this makes a real difference to the fit but she did turn it around once I mentioned it.

Actually this is a good opportunity for me to mention my own nappy gaffe. Bambino Mio pointed out that I may find the nappy fits Talitha better by using the buttons down the front. They haven’t leaked so far but I’ve no doubt they’re right. I’ll do a demo of the poppers in tomorrow’s post, the final nappy challenge.

All in all, I don’t think Talitha’s grandmum found the nappy much of a hassle at all. She’s well versed in real nappies herself though, having done terry squares with her three boys.

Since it went so well, I’ll probably leave her a few Miosolos when I do eventually get myself to leave Talitha with her like I keep saying I will.

PS: Bambino Mio is offering 25% off all miosolo purchases from their online shop with free p&p and even throwing in a free 100g of miofresh (nappy sanitiser) too! All you have to do is enter discount code: challenge at the checkout.