The #EthicalFashionCollective – Six ways to make your baby purchases matter 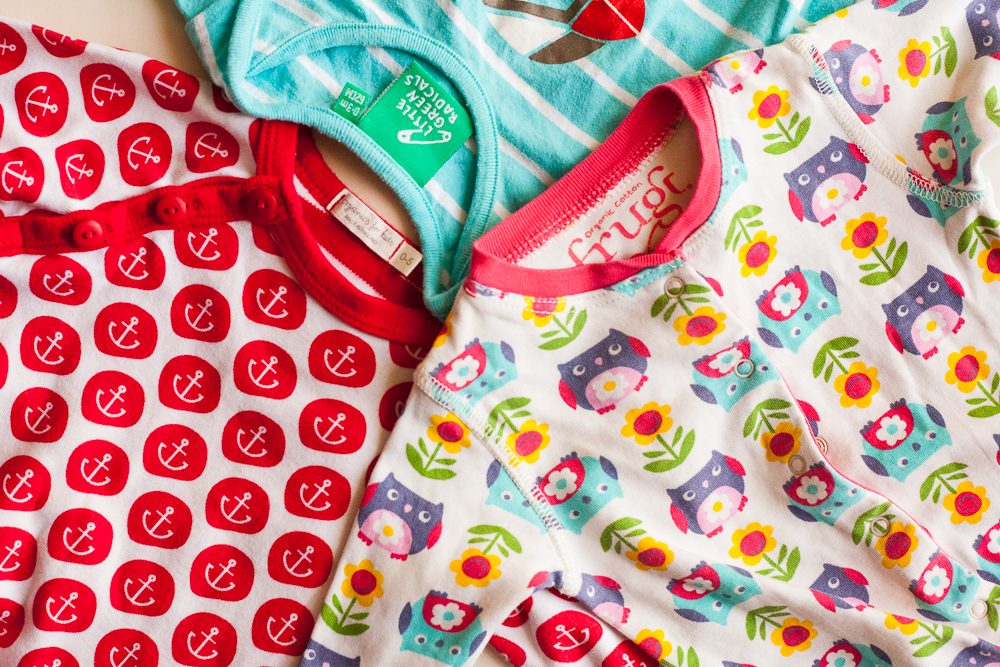 When people find out we’re having a third girl, they often say, “At least you won’t have to buy anything.” Actually, we got rid of almost all our baby kit as quickly as Ophelia outgrew it as we were mostly expecting to be a family of four not five and we both hate having to store stuff and dig it out later to get rid.

Actually, that’s been fine because it’s quite fun sorting all the baby things and this time I’ve been in a privileged position to be able to think about what I like aesthetically a bit more. Yes it’s frivolous but I do like clothes and pretty things and this is the first time in my life that I feel allowed to admit that.

I’m also putting together our baby gear at a time of life where I’m thinking more about ethical purchasing and seeking simplicity. While I may not yet be where I want or need to be, I’ve been making little changes to the way I consume here and there over the past few years. My shopping haul for baby girl number three has been part of that.

1. Buy essentials
We buy too many things. This is triply true when it comes to baby purchases. Having a baby is exciting, shopping is lots of fun and the two combine to overwhelm our houses with stuff we don’t need that ends up in landfill. Do your research online (make sure it’s not just marketing material you’re reading), ask friends whose babies are now toddlers what they regret buying or better yet, wait. You can wait with a surprising number of purchases. Babies actually don’t need that much to begin with.

When I was pregnant with our first daughter, we chose a pram that our in-laws bought for us that we almost never used! I’ve daydreamed about the beautiful sling stash I could have funded instead. 😉 On a serious note, having used several pushchairs since, if we’d waited to work out what we needed and maybe gone to a store with more diverse options and personal expertise, I totally would have gone for something else.

2. Shop second hand
OK, so I’m sorry if that first point was a little boring. When you know what you want, why not buy it second hand? Especially in the first year, many baby items don’t get worn out before they are passed on. I’ve bought lovely hand-knitted cardigans from local charity shops in the past, giving them more use at a price affordable to me.

Also, it surprises me how many people don’t know about nearly new sales. The National Childbirth Trust (NCT) run some fab ones and you’re looking at paying 20-50p on baby vests depending on where you go. We hit on in Portishead a couple of months ago and got some beautiful clothes for not very much at all. Some had been worn by two or three babies but still looked new. Some of that haul is in the picture above.

3. Go organic
This is something that’s been on my radar a lot recently. We’re not in a position to choose organic options all of the time but I feel doing what we can is still worthwhile. There needs to be major shift away from current intensive agricultural practices for the sake of wildlife, the environment and the health of the labour force and consumers. I know we don’t often think about organic purchases beyond food but it’s worth looking into.

A major obstacle to buying organic baby clothes for many of us is, undeniably, cost. While I managed picked up a few organic bits from that nearly new sale I mentioned before, I’ve mainly bought pre-loved organic clothes from Facebook selling groups. They aren’t always the more expensive option depending on what you’re looking for, though, so do have a look at brands like Frugi, Organics for Kids and Little Green Radicals if you usually buy clothes new.

4. Make your own and upcycle
Buying something may offer an instant hit (I’ll admit to indulging in retail therapy when I’m not feeling great, even if it is just a pack of pens) but crafting has a slow burn delight all its own. Better yet if you can get your hands on reclaimed materials or upcycle an item you don’t need anymore. A man’s shirt could become a baby’s dress.

I’ve been crocheting a blanket for this baby. The wool isn’t second hand or reclaimed but it was knocking about from another project I never got around to. They could have sat there for years while I bought a blanket but instead they’re being repurposed. Even if they aren’t traditionally baby colours, I find the combination so pleasing. I’ve also crocheted a newborn hat.

The tie-dye baby grow is a creation by Recycled Rainbows. She’s a mum in Bath who sources second hand white clothes and tie dyes them. I couldn’t resist this item at a La Leche League workshop recently (she was donating profits to LLL).

5. Think reusable
Are there items on your list that you could think about in terms of the long game? Are they made to last? I mean, obviously, this is a little funny coming from someone who could have saved everything to kit out three girls with the same gear but I’m still trying to think about whether I’d be able to pass items on to another baby afterwards. Our cloth nappies are honestly knackered. I’ve mainly used terry squares with Motherease covers.

The covers are actually still fine after two babies but holding up the squares to the light reveals some thinning. I feel fine about that because I think they’ve been through a lot but while it would be tempting to just say we’ll just go disposable this time, I’ve started building a new cloth stash for this new baby.

6. Donate to support other mothers
While it’s relatively easy enough for me to get things sorted for this baby, I’m conscious that there are many mothers in the UK for whom the joy of having a baby is accompanied by financial stress due to poverty. I’ve been following Baby Bank Network with interest. It’s a charity that collects pre-loved baby items and passes them on to families in need. They’re local to Bristol but you can find similar organisations around the country here.

For now I’ve made a cash donation but I will be looking for other ways to offer items (I do have bits I accidentally saved that I don’t need) or time. I reckon if you wound up with too many things because of generous friends or bought a pack of, say, babygrows but didn’t like all of them, looking for a place to donate could be a good option.

This post is meant to share ideas rather than prescribe. I do think that if all of us did what we realistically can even if that means, say, a charity shop purchase once in a while rather than a full-scale overhaul, it would make a difference.

I’m joining in with the online Ethical Fashion Collective started by Mel Wiggins and Owl and Accordion. On the first Friday of every month you can join in with a blog post, tweet, IG or Facebook status hashtagged #ethicalfashioncollective to share your ethical style and ideas.

A “not half term” flash camping trip

Buy things you won’t throw away