Our KG Hypnobirthing Journey – The course, part one 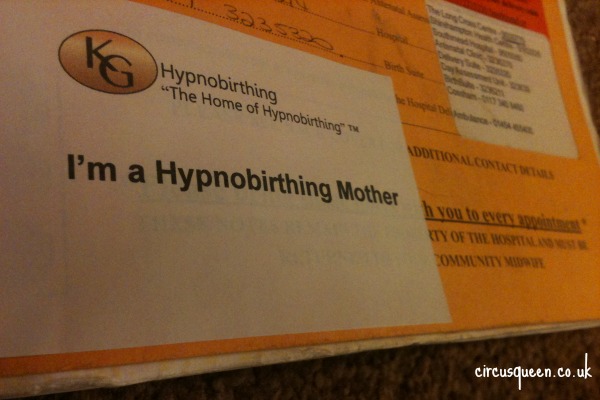 Disagreements and skepticism were welcomed in the room as Katharine Graves confidently began the HypnoBirthing course we’d decided to attend. She acknowledged that the prefix “Hypno” was enough to make many people instantly conjure up “hippies, beanbags and chanting” and wonder whether it made any real sense. What there was no question about was that she had no question herself that KG HypnoBirthing works. Hers is certainty born of experience, not just intellect.

Laurence and I had come at it from sort of different angles. He wasn’t sure what it was or how effective it could be but was willing to go along because it was something I wanted to do. I had heard of it when we were pregnant with Talitha but didn’t really consider it, mainly because I’d underestimated the situation. I really didn’t think birth was that big of a deal and I didn’t yet know how deeply I’d be affected by a birth that was, for me, traumatic. Actually, his doubts about HypnoBirthing probably came from the fact that it was a traumatic experience for him too, only he had to look on, which I imagine was pretty disempowering.

Yet, in the lunch break, both of us agreed that this definitely didn’t sound like mumbo-jumbo. In fact, it was just common sense. Of course positivity during pregnancy and labour would affect the outcome and the baby. “Hypnotherapy is simply words,” Katharine explained, “Words are powerful.” Well, she’s got me with that one. I absolutely believe that. I don’t necessarily think that words always hold permanent, external meaning (I won’t go all academic on you there because that really isn’t what this is about) but I’ve absolutely experienced the power of language in my life. It’s helped me believe some amazing and awful (and, come to think of it, amazingly awful) things about myself and about my experiences.

Still, could birth really be pain-free? Could replacing the word “contraction” with “surge” actually affect the way the movement is experienced? I might accept that premise more readily as a first time mother but having been through a labour that was most definitely not without pain, I’m slightly taking a wait-and-see approach. I am definitely open, though. I don’t believe that the past dictates the future. For one thing, I’ve seen too many mothers successfully breastfeed after believing that they couldn’t since they hadn’t managed with a first child. So much of what we’ve learned about KG HypnoBirthing so far can be applied to all of life, which is why it makes sense.

“How does thinking in negatives affect your life?”

As Katharine pointed out, we often speak in negatives. An example she gave was a heavy snowfall which an adult might consider “the worst snow in years”. To a child, it could be “the best snow” – squealed with delight. She challenged us: “How does thinking in negatives affect your life?”

Well, I’d say it certainly affects your parenting! Thinking back to all of the things that I’ve found most stressful in parenting so far, so much of it was transformed by rephrasing. I spent vast amounts of time and energy in those first months at my wits’ end about naps. Once “she won’t let me put her down” got turned into “we get to enjoy this closeness”, I was infinitely happier. If I could look at her tears as a natural and desirable need for my compassionate presence rather than an inconvenience, I was more willing to slow down. When I began writing about motherhood on this blog as a beautiful gift and valuable work, and began to ignore anyone who asked if I was “just a mother”, I was able to see the meaning in our often repetitive days.

KG HypnoBirthing seems to work on the premise that we can change our perception of birth as painful rather than powerful. So much of this is simply about letting go of all the negativity we’ve accumulated.

I’m not sure that I was quite expecting the course to cover all the things that an antenatal course would so I was pleased to hear breech birth, back-to-back positions, the roles of midwives and obstetricians, pelvic floor exercises and so on, covered. These were all things I’d heard before both in NCT and NHS antenatal classes but not with such positivity. Katharine is straight-talking, not in the least airy-fairy and her confidence is infectious.

The second portion of the day was mostly spent doing exercises which involved relaxation and visualisation. We went through scripts that Laurence and I will practice here at home. We’ll be reading The Hypnobirthing Book (or I’ll be, anyway) and listening to the CD in bed, which has the upside of forcing me to actually go to bed when he does.

All in all, we’ve both left feeling a lot lighter. The day gave a chance to talk a lot about the new baby, which isn’t something we’ve done that much of. We were able to chat through some of the stuff that happened in our last birth and that helped too. I can’t speak for him but I’m actually looking forward to this second birth, whatever it brings. Whether we achieve the home birth we’d prefer or end up going to hospital, I feel certain that we don’t have to take the baggage of our first birth in with us. The past need not and will not bog us down with its accumulated fears.

The second half of the course is this Sunday. I can’t wait.

Read about the second half.

The HypnoBirthing Centre with Katharine Graves gave us a free place on a HypnoBirth course at St Thomas’ Hospital on South Bank. I was also sent a copy of The HypnoBirthing Book and the Relaxation CD, which are included for all participants, and one of each to give away to you, fair readers. More about that soon. I don’t always bother to say this but since I’ve practically raved about Katharine in this piece, I feel like I need to say that everything I’ve said here is unashamedly my genuine opinion.