The out and about nappy challenge 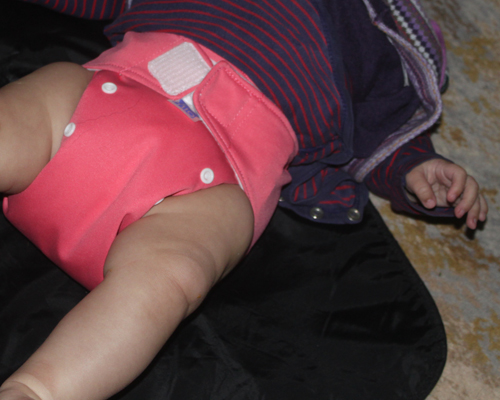 On to the second Miosolo nappy challenge!

I didn’t complete this challenge myself. I came down with a horrid fever which meant that on Sunday, Laurence braved it on his own by taking Talitha out without me for the first time.

He’s a hardened cloth user but I think he’d be the first to say that if it weren’t for our finances and the landfill, he’d be stocking us up with two years’ worth of disposables. He’d rather just get on with the next thing than fiddle with a snappy – especially when he’s out and about.

So it seemed fitting that he take a Miosolo with him and come back to report to his old lady.

He admired not only the ease but the fit. There was no fiddling about trying to get it to be just right: not too tight around the waist, not too loose around the legs. Just on the baby and off they went. Just the way he likes it.

I think he’s secretly hoping I’ll save the Miosolo nappies for him to use whenever he’s on nappy duty.

The out and about nappy challenge