The sling meet: learning to wear an older baby in a woven wrap 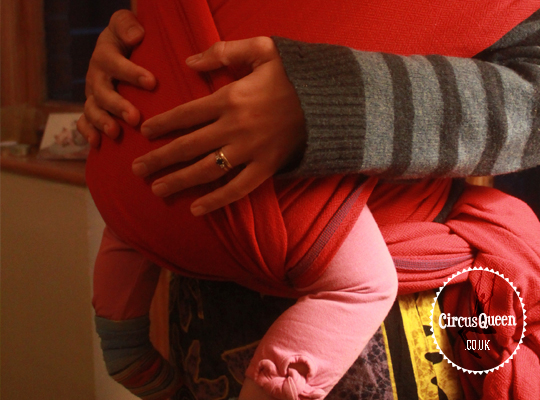 Over five metres of intricately woven cloth have hung in my hallway for almost a year. My Storchenwiege woven wrap, a birthday present from my parents, has been draped over the banister, mocking me.

Repeatedly, I picked it up, flung it about my shoulders and cast it aside in frustration. I could put a baby in stretchy wrap with my eyes closed. What was so different about this?

I looked at YouTube videos and kind of got the gist but for some reason it just didn’t feel right. I also lacked the confidence to experiment. I’m not sure why. That’s just the way it was.

But I really wanted to be able to use it. My soft structured carrier, the Ergobaby, was comfortable and easy enough but I missed that cuddly feeling of being wrapped up with my baby.

I know some people go on using their stretchy wraps with toddlers but by the time Talitha hit around six months, my Moby was no longer as supportive. I realise this may have more to do with my physiology than the wrap itself.

Every time I mentioned my woven wrap angst on Twitter, Jax from Live Otherwise kept telling me to go to a sling meet. I meant to. I wanted to. But I kept finding reasons not to go. I hate being the novice in a room. It’s ridiculous but true.

Well, today, I finally went. A babywearing friend with a very pretty Beco carrier offered Talitha and I a lift to the Bristol Sling Meet.

We ate cake, drank tea, discussed how long we were thinking of co-sleeping for and the best attire for elimination communication – we’re living, breathing natural parenting stereotypes, I know. It was surreal having these conversations in real life because I usually have them on the internet.

A table was laid with every kind of sling or carrier you could think of. Well, almost.

Then came the moment of truth, someone offered to show me how to tie the woven wrap. She demonstrated with her wrap and her toddler who is, incidentally, three pounds lighter than Talitha. I copied with my little heavyweight and my Storchenwiege.

I couldn’t believe how simple it was. It was building on everything I’d already learned from having carried her in a stretchy wrap. Why I couldn’t get this from looking at pictures, reading instructions, following videos, I just don’t know. Maybe it was just the added confidence of having someone there to look at what I was doing.

I repeated it when I got home to make sure it wasn’t a fluke. It wasn’t. Talitha seemed so at ease. It was almost as if she remembered the feeling of being wrapped and liked it. She hasn’t been wrapped for almost four months.

As for me, it’s as comfortable as the Ergo. It’s just as supportive. I don’t feel any strain whatsoever. And it’s got a lovely softness going on since I’ve washed it. I’ll likely do a full comparison on here at some point.

I’m really looking forward to taking her for a long walk in it tomorrow. At nine and a half months, our adventures in babywearing continue.

[Excuse the bad wrapping, I have since learned!]