The start of a love affair with food 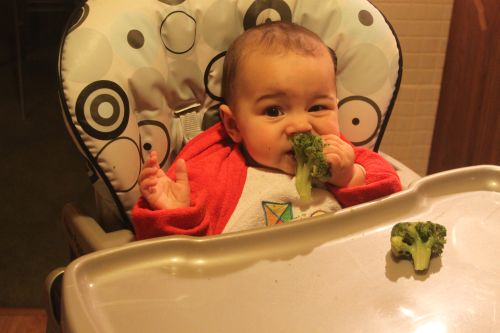 The first smile is a classic landmark. The first smear of curry across your baby’s face? Not so much. The first time she shovels more chicken into a mouth full of chicken while trying to babble? It’s pure delight.

Talitha started eating solid food the week before she turned six months. She had kept grabbing at what I was eating and it seemed time to let her do what she would. So, I peeled her a banana and the carnage began.

I don’t even remember what she’s eaten so far. I look up into my brain when people ask. Eventually I admit that she eats whatever I do. I ate chicken curry and rice yesterday and buttered toast this morning so, yeah, that’s what she eats.

Some of it is pureed – as in, if I’m eating soup then so is she. I load the spoon and at first she feeds her eyebrows. A few minutes in and it’s actually going into her mouth. Who would’ve thought my seven-month-old could use a spoon. It’s pretty hilarious.


I decided to go down the route of Baby Led Weaning (letting the baby decide what she’ll eat, how much and when) because the prospect of schedules, blenders and playing the choo-choo with a spoon confused and worried me. It also seemed so unnecessary.

Having read Gill Rapley’s Baby Led Weaning and having let my daughter to feed herself this way for the past month and a half, it makes sense to me. When she’s physiologically ready to eat, she’ll developmentally be able to do so.

In the beginning, I heard a lot of “Won’t she choke?” Well, hopefully she won’t. Babies are actually really good at maneuvering food around their mouths if they’re allowed to be in control of the process. There have been a few nerve-wracking gag moments but usually by the time I get concerned she’s spat out whatever was giving her a hard time and is smiling at me.

Cons? It’s messy. But the more she eats the better she gets at putting it in her mouth and not on the floor.

Pros? I get to eat my lunch while she eats hers. I’ve cut salt and sugar out of my diet considerably. I also get to see my daughter explore new foods every day with gusto, improving her co-ordination and clearly enjoying every bite.

At some point I need to explain to her that talking with your mouth full is not the done thing, I suppose.