The washing and drying nappy challenge 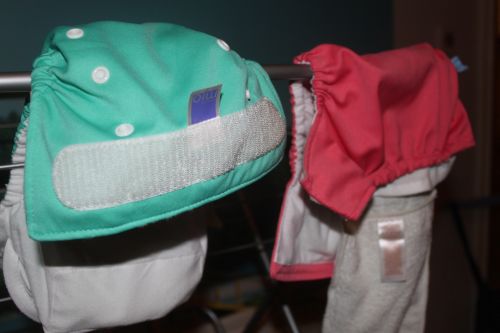 This is the last of my Miosolo nappy challenges for Bambino Mio. It’s been an enjoyable week, giving these nappies a go.

After all they’ve been through, it was definitely time to put a wash on.

I’ve used cloth nappies from the start so I feel like I’m a bit of an old hand at managing nappy laundry.

Modern washing machines are powerful enough for us to do away with the boiling that our mothers had to do. If I’ve got a particularly yucky bunch though (and now that she’s started solids, this is often the case), I generally throw in some Napisan and occasionally wash at 60 degrees.

I suspect Napisan is not the nicest of things, for the environment or for babies’ bums, but I literally wasn’t finding anything else that worked to get the stains out. And even though nappy liners catch the grossest of the stuff, liquidy poos mean you still need a solution that’s up to the task.

So, I loaded up the washing machine with Miosolos and my usual terries and put in a scoop of Bambino Mio miofresh to the washing machine drawer along with my usual detergent. It’s hypoallergenic, enzyme free, perfume free, without chlorine bleach and it’s biodegradable. So, in short, it seemed so devoid of icky stuff that I was pretty sure it wasn’t going to combat the poo stains.

Well, well, well. I actually got my nappies clean. In fact, it not only cleaned the Miosolo nappies but my terries came out clean as well. Score.

One of the main reasons I use terry squares is that they dry in minutes, even in the winter. I can’t say the same for the Miosolo but I’m still impressed. Hung out at night with their inserts on the outside, they were dry by morning. Not bad.

A strong end to the Miosolo challenge week.

Be warned, next week I’ll probably be back to yacking about my boobs.

The washing and drying nappy challenge