The week in baby led weaning 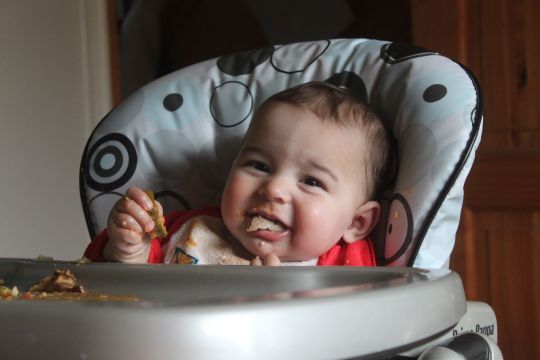 I literally trawl the internet looking for photos of babies eating and real-life experiences of baby led weaning. If you are similarly inclined, read on.

Probably a bit too fatty but Talitha absolutely loved it. In fact I think she kept forgetting she already had stuff in her mouth but, hey, if she doesn’t mind spitting things out and putting them back in her mouth, who am I to criticise?

She wolfed the bread but obviously wasn’t a fan of the hummus. She didn’t seem to get much of it in her mouth so I thought I’d let her test it out on a spoon I loaded and handed to her. She was so not impressed. I’m in two minds about the bread. On one hand, she obviously enjoys it. On the other, I’m reading scary things about gluten and it just doesn’t seem like wheat is the best thing I could be introducing her to this early in her life. Hmm, will have to do some more thinking.

I thought I’d let her try this because it allows her to practise her pincer grip (I keep wanting to say sphincter – which radically changes the meaning). She still hasn’t worked out to do with rice despite it being sticky. She ate everything else though. I did find one red bean whole in her nappy (you’re welcome for the details!) but other than that it seems that she actually managed to put it away properly and do something with it.

Again, I really get the impression that she doesn’t like the hummus. I may try adding more garlic and lemon to it. To me, it’s obviously missing the secret ingredient: salt. That shouldn’t matter to her, I’m guessing. As always, potatoes are her thing. A true Brit.

The mash was made with potato skins left in, which Talitha really struggled with. The first time I just couldn’t bear to watch her continue to chew, gag, try to spit out and repeat so eventually I reached in and pulled it out (which is dangerous). She just picked up the skin and did it again but this time she successfully maneuvered it. I’ve got to learn to just trust the baby. All in all this meal was a success as she alternated between shoveling the mince into her mouth and picking it up one tiny bit at a time.

(Please excuse the annoying lighting in most of these photographs)