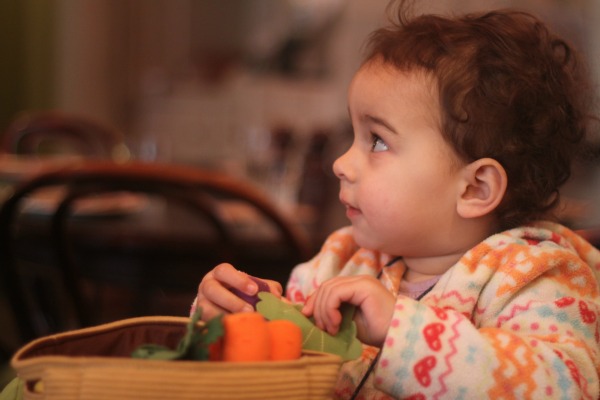 A four-day weekend – what a great way to end and start the week! It’s been quite a celebration here in Bristol. Talitha had a very little bit of chocolate but that was about all she ate yesterday! Clearly, it’s powerful stuff. I need to finish it for her, don’t you think?

Now that Lent is over I’m back on the caffeine…kind of. Actually, I’ve not been able to finish a cup of tea or coffee and though I’ve really missed them, I’m finding I just don’t enjoy them like I thought I would. I’m hoping this means moderation at last.

As per our Good Friday plans, I attempted gluten-free hot cross buns, except they turned out more like hot cross rock cakes. Oops.

We opted not to disrupt the quiet, reflective service at our church with a loud toddler and instead took a freezing walk around Lawrence Weston Community Farm. Four months into the year and it’s still single digit temperatures but Talitha loved seeing and saying lots of “Cluck, cluck, clucky” and “Baa Baa”.

Clearly, one day in the cold wasn’t enough so we wondered around Ashton Court the next day, looking at deer. That was before descending into supermarket hell and discovering why you shouldn’t leave your Easter egg shopping to the day before Easter Sunday.

Yesterday we went to church for a one-woman performance of the life of Jesus, complete with puppet Pharisees, Mexican waves and balloons, as you do. We spent the rest of the day at Laurence’s parents’ house out in the countryside.

It’s been a treat having my bro and his wife with us this weekend too. So we rounded up the weekend with lunch at Las Iguanas on Whiteladies Road. I’d forgotten how much I enjoy Las Iguanas. Lots of gluten-free options and they even gave Talitha a basket of toy vegetables to play with while waiting for the food.

Having lots of adults around has been a relief for Talitha and I. We were both really tired last week and got on each other’s nerves a bit – though I’m grown up so should have known better. Tamtrumtastic Thursday saw me thanking God it was the weekend when she started the day refusing both nappy and potty and went on to reject pushchair, sling and walking when we were out. Mer. Cy.

You know when you just want to believe that those stares strangers are giving you aren’t judgemental? It’s kind of like driving too. The more you think about what other people think of what you’re doing, the worse you handle the situation. Well, I do. I’m still learning to drive, by the way. The plan is to get my license before we move or at least before having another child.

On the topic of moving, that’s coming along. Mortgages are getting sorted and we’ve seen a solicitor. It all feels very grown up. In the meantime, our house is all a bit OCD Cleaners at the moment with sell, chuck, give and keep categories. Again with the high brow TV. I really recommend you get into More 4’s Nashville though. It’s truly one of the highlights of my week.

So, tell me, what have you been up to this week?