Theatre in the Yeo Valley gardens 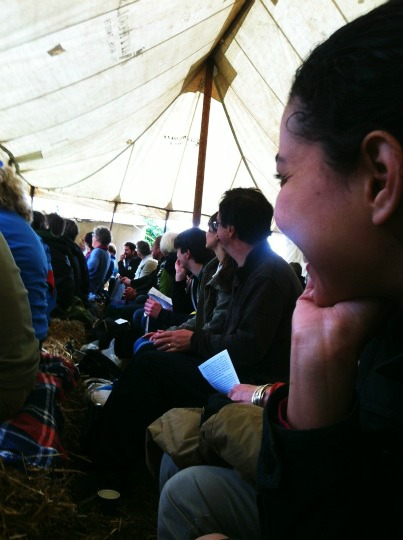 “Bless you, latecomers!” the man dressed in a white tutu exclaimed, humorously. He wrote something down on his clipboard. We ducked nervously into the tent and got settled on the straw bales. I hadn’t realised we were late, actually. And we weren’t the last.

Even after he began, Jimmy Whiteaker skilfully and comically paused to point latecomers out and catch them up with what was happening. In fact, throughout the two 50-minute one-man performances I, Peaseblossom and I, Caliban, he displayed alarmingly quick wit in the way involved his audience.

It was a surreal experience, sitting out in the gorgeous Somerset countryside at the Yeo Valley gardens. I’d been to visit recently and they’d invited me back to enjoy some outdoor theatre.

Talitha was tucked up at home with her Puppa while Laurence and I took her Grandmum out (or perhaps I should say Sarah and I took him out as it was our plan). None of us were sure quite what to expect.

We were in for a real family experience. It felt as though we were at an eccentric party at someone’s home – well, Yeo Valley’s home – sat in their garden. It lent the show instant intimacy and beauty.

I would have expected, though, that the act would be under threat of getting lost in all this space, dwarfed by the Mendips before us and dampened by the rain.

Yet Whiteaker remained ever in control of his surroundings. We saw only him. Even the rain seemed an extension of his characters. With every movement designed to command our attention, he called us into a retelling, written by Tim Crouch and directed by John Retallack, of two stories known only too well.

Well, I say that but then I hold an MA in Early Modern Literature and Culture so I’ve more than done the Shakespeare thing. Most people remember a thing or two about A Midsummer Night’s Dream though, even if mention of The Tempest lraises a question mark.

I, Peaseblossom and I, Caliban get the balance right. They’re takes fresh enough to surprise and excite the familiar, with sufficient clarity and meat to stand on their own.

And speaking of meat, a visit to Yeo Valley without some yummy gnosh just wouldn’t make sense. A theatre intermission usually sees me either celebrating at the bar or self-medicating with ice-cream.

A hearty sausage off the barbecue is just what the evening called for, made perfect by a brownie for dessert and a cup of coffee to see me into the second show, having been up most of the night before with a teething baby. We made a game of what Yeo Valley products might be involved in the meal. They seem to make everything.

The evening was one of Yeo Valley’s summer events and another stop on The Theatre Orchard’s June tour. I fully recommend them both if you’re looking for things to do this summer. Don’t take your babies to the play, though. It’s aimed at ages eight up and if we’d taken Talitha, she’d have performed her own retelling.

Yeo Valley gave me tickets and something from the barbecue.

The first image is theirs. The rest are Laurence iPhoning it.

Theatre in the Yeo Valley gardens