There’s a star on your bum 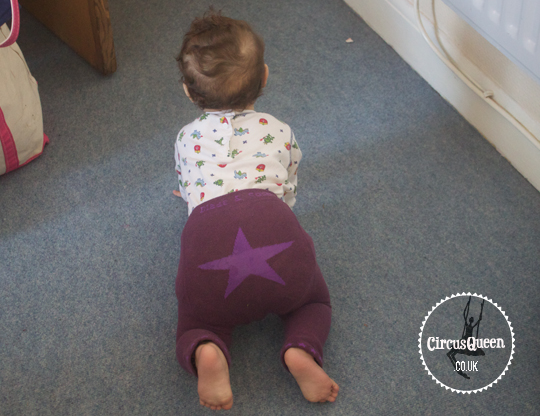 At the risk of sounding like my baby is my dolly, I’ll admit that I enjoy dressing Talitha more than I do myself.

There are days when I don’t make it into the shower. A younger version of me would gasp in belief at the sight of me leaving the house sans makeup but that’s exactly the scene more often than not these days.

It’s not that I’ve lost interest in my looks. There’s just often not enough time to dress two people and if it’s going to be one of us, it will be her. That’s probably a mix up because she is the one who really doesn’t care.

This week we were sent a purple pair of baby leggings by Blade & Rose. They’ve opened a world of possibilities for her wardrobe. I love that they’re pretty without being overtly girly.

I’d happily dress a boy in these, maybe paired with something green, though I suspect that’s not who they’re aimed at. On the subsequent baby note though, these leggings are nice and thick and of such high quality that they’ll certainly last well enough to be passed on.

Talitha’s constantly standing up and trying to climb things, so having her feet free is a good idea. The footless look also allows us to show off her sweet amber teething anklet. I can’t help but grab her feet and kiss them when they’re bare like this.

Her mobility means that she ends up squirming a fair bit when I’m trying to dress and change her though. No matter. The leggings are ridiculously easy to put on and take off, easier than many of the pairs of tights we’ve battled onto her.

I’m thinking of everything in terms of how quickly I can remove it at the moment as we’ve got the potty out and I’m going to give (a little bit of) elimination communication a go. It’s just become really obvious when she’s gearing up to do a poo and I reckon I could whip these leggings off in plenty of time.

But, not wanting to leave you with that image, I’ll also say that the thing I love best about these leggings is how cute her big cloth bum looks in them. I just can’t get over the star. Good grief, when did I trade eyeliner for this?

Blade & Rose sent me a pair of purple star leggings

There’s a star on your bum