This bed’s not big enough for the three of us 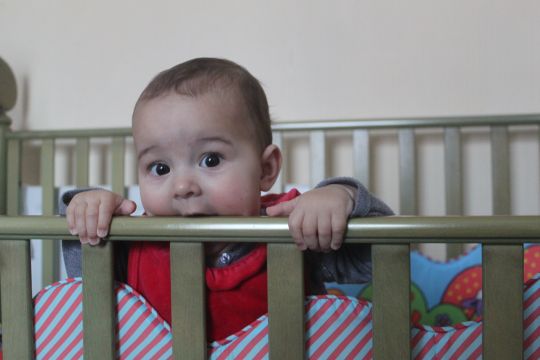 “Wait, what? She’ll still be sleeping with us?”

“But we don’t have a big enough bed.”

“We could buy a bigger bed.”

We are getting a bigger bed. My in-laws aren’t giving it as a donation to the co-sleeping cause but I can’t wait.

There has never been enough room for the three of us in our bed. When she was a newborn, we stayed well away from her – terrified that we might squish that fragile frame.

She has mostly slept between me and the rejected cot, which acted as a bedrail. Now that she is strong enough to kick the cot away from the bed, she sleeps between us.

The cot sulks in the corner, knowing it will only hold this tiny human for the first three-hour sleep of the night. Then madam demands to be where the action is.

It’s been magic mostly not having to get up at all in the nights. She stirs, I flop a boob her way and within seconds or, at most, minutes, we’re asleep again.

But now she sleeps between us star-fished while we are consigned to the edges, fingernails gripping duvet so we don’t to fall out.

Ok, it’s not quite as bad as that but I can’t work out why it suddenly feels like there’s even less room in the bed.

It could be because we didn’t expect at almost 9 months to still be co-sleeping. That can’t entirely be it though because before she was born we’d never intended to bring our baby into bed.

I wrote a post about how reluctant I was about doing this but how unwilling I was to sacrifice the sleep necessary to do otherwise.

I worried that it would wreck our marriage, make our baby overly dependent, risk her safety, cause the universe to implode.

It was on the long list of things only weird parents did like breastfeed beyond a year. By the time she was born my mind had changed about extended breastfeeding but not about sleep sharing.

I’d never expected that eight months down the line it would feel so sweet, so cuddly, so normal – even when she pokes fingers up or nostrils to wake us up. Life as we knew it is still in tact – in fact it’s better. But darn it, I need some more space.

We need more space. We have different opinions of what this means. I know that he’d be fine with putting her to sleep in “her” room tomorrow. I’ll admit, I’m not ready for that, mainly because I don’t think she is.

Call me soft. I call it instinct and have only made one parenting rule for myself, never to override it.

This is the baby who so was so insistent on being with me that the night she was born even the midwives in the hospital agreed that she needed to be in a cosleeper instead of a cot. Born at 9pm, we finally drifted off together at 5am.

To be honest, I just wouldn’t even know how to make the transition. I have little impetus to think about it because the six-month landmark has come and been. For all his talk, I’m pretty sure Laurence doesn’t have any specific age in mind anymore either.

I’ve heard that parents in Japan share sleep with their children sometimes until the age of ten. I’m pretty sure he’d say: “Well, not that.”

——–
The Brilliance in Blogging awards have opened. If you’d like to nominate me (and any other blogs), you need my name “Circus Queen” and url “http://adelejarrettkerr.co.uk”. Anyone can. I’d appreciate nominations in any category you think I’m suited to but especially like the look of “Lit”.