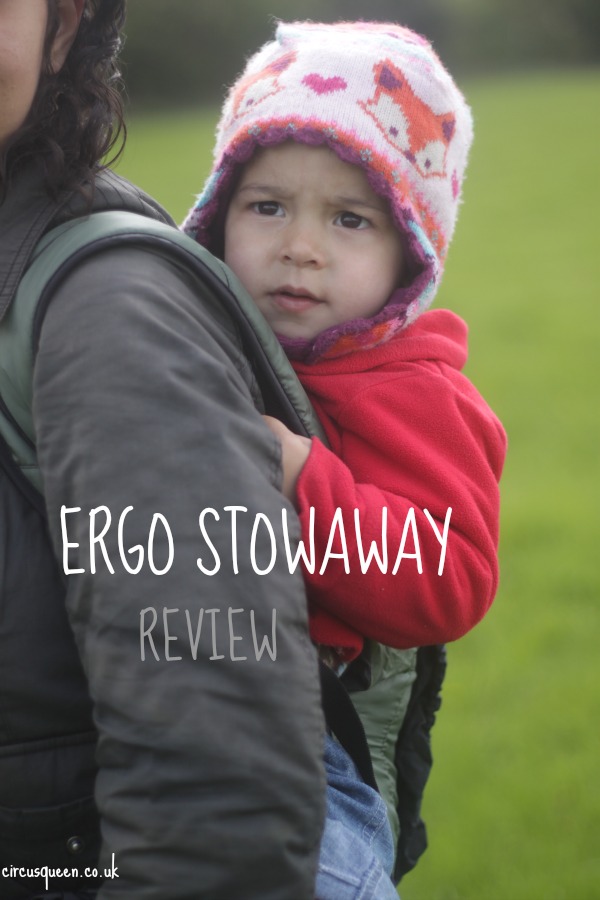 I recently gave the Ergo Stowaway baby carrier a test drive and am finally getting my act together to tell you about it. Hence the many, MANY layers we are wearing in these photos. I know, I’m boiling just looking at them!

Anyway, it’s a really clever piece of kit. When I took out of the box it looked so flimsy I thought that there’s no way I’d comfortably carry my heavy toddler in it (she was nearly two when I tried it) or that she’d feel supported enough to want to stay in it. I was wrong on both counts.

I didn’t wear it for hours, granted, mainly because I don’t generally carry her that long anymore. She wants to walk at least some of the time. I think I painlessly could do a few hours with it though.

This is a surprise to me because I found the Ergo Performance just got a bit small when she was around eighteen months. No matter how I adjusted it, it would start to pull on my shoulders after 45 minutes. It could have been a stage we were going through, I guess, and maybe it would be OK now but I don’t have my Performance anymore so I couldn’t say. The Stowaway certainly seems cushioned differently in the shoulders which made a difference to me anyway.

I would say that the carrier was quite low on Talitha at twenty-something months. It didn’t feel unsafe but I wouldn’t have appreciated it when she was going through a stage of throwing herself away from me for fun. She is also a lot more likely to fall asleep when a bit more enclosed by her sling but I know that’s not an issue for a lot of children.

As with all Ergo carriers it’s very easy to put on and get the baby in it and a breeze to adjust too. What, of course, sets this one apart is how it “stows away”. It folds itself into a tiny bag which fits beautifully in your bag. I was concerned that it was going to be a faff to figure this out, especially since I don’t always find Ergo’s instructions the most helpful (but then I really need you to spell it out for me) but it was quite intuitive, I found.

All in all, I think it would be a brilliant buy, especially if you were going to do a lot of travelling. With a younger baby, it would be absolutely fine carrying them in it for hours. It’s also breathable and lightweight so I imagine it deals with the heat quite well too.

Ergobaby lent me an Ergo Stowaway for two weeks for the purposes of this review. I received no compensation, other than satisfaction of my geeky sling curiosity.