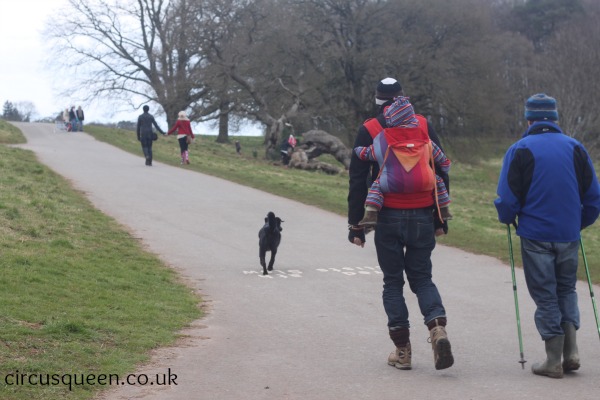 Around about eighteen months, Talitha began to feel quite weighty in our ERGObaby Performance. I could still carry her in it but I began to look around for something suitable for heavier use. I know people who happily carry their three-year-olds in the Ergo but I suppose it’s a matter of personal preference and depends on how much you use it. I don’t drive and infrequently use a pushchair, so I considered my options.

Trawling babywearing groups on Facebook and the Natural Mamas forum for ideas on what I should try next. Many babywearers who carried toddlers raved about woven wraps. I expected this because I love the utter customisability of the way a wrap fits and I know how well their distribute the weight. However, I wanted something that could be used in a hurry and Laurence was flat-out not interested in wrapping. Those who loved buckled carriers recommended the Wompat, effusively. So, I went ahead and bought a preloved toddler Wompat with some money my parents gave me for Christmas. I’m so glad I did.

It’s a soft structured carrier made from a Girasol wrap with cord straps. I love the look and think it’s so pretty. Being that bit bigger, it secures her close to my body and fits knee to knee, which though not considered as important past a year, I’ve found improves my own comfort.

Also, it’s covered in magical sleepy dust. Talitha falls asleep in it all the time. If she has her arms out, I’ll either encourage her to put them in or I’ll tuck them in after she’s asleep. Once deeply asleep, I tie the sleep hood and we’re sorted. The cords for the sleep hood are very long so it’s easy to reach them. Laurence isn’t keen on the pixie-hood but I think it’s so cute!

He loves the Wompat, though. He’d been complaining a lot more than I had that she was getting heavy but now finds babywearing comfortable again. I’ve literally worn her for hours on my back with no trouble. Sometimes I leave her to nap there.

A couple of months ago, it was my saviour on a trip to London when she wanted to get in and out of it. As a buckled carrier, it’s relatively quick to put her in it and to adjust it, and there’s little room for error. I can certainly see there’s room for growth. We’ll be using it to the end of our babywearing days, I reckon.

I’m such a fan and people always stop me in the street to ask about the Wompat so I thought it was about time I blogged about it and shared the geekery here!

So, babywearers/toddlerwearers, what do you think? Like it, have one of your own, prefer something else?