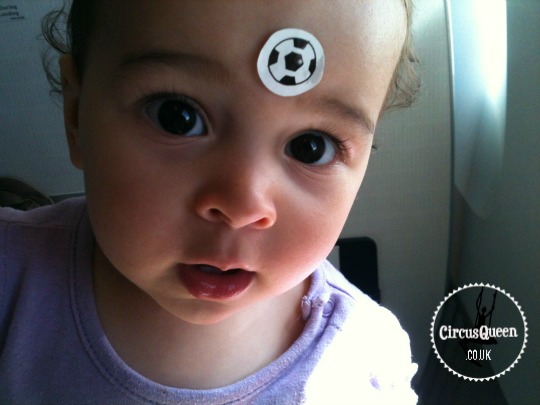 Scared to fly with a baby

A week ago I did something I’d sworn I’d never do again – take a baby on a plane. On my own. I didn’t even blog about the last time I did it, when she was six months old, because it really was that awful. At fourteen months it could only be worse.

OK, no, I take that back. It could have been much worse the time before. She didn’t cry the whole way but she was on the verge a lot of the time. I spent most of that flight standing in the exit, trying to jig her to sleep in the Ergo to no avail. Nineteen hours door to door and that child slept FORTY-FIVE minutes! And not even all at once! Post-traumatic stress courses through my body at the memory.

Anyway, my fear of flying with a baby who could now move grew palpable as the day approached. I asked friends who were more experienced parents for advice. I repeatedly scanned the internet with variations of the search term “flying long haul with a mobile baby”. I asked my mother to pray. I half-jokingly begged Laurence to leave his job and fly with me. I questioned my sanity.

How the journey with a baby actually went

It was nowhere near as bad as I’d feared. I’d even go as far to say that we had a – mostly – enjoyable time. It was like an adventure for me and my little friend, albeit an adventure I’m relieved not to be repeating for a few weeks.

One thing that had made the journey so hellish last time was that it had been so long. We started in the wee hours of the morning driving from Bristol to London then flew to Tobago for a few hours before getting another flight to Trinidad. Why, why, why?

This time we overnighted in Brighton and drove up to Gatwick at a much more sensible hour so the journey began considerably later. We also had a direct flight to Trinidad. Score.

As I walked into the airport with my laden trolley, my heart was beating hard. I even acquired a stutter speaking to the woman at the check-in desk. She was so lovely and reassuring that I’m not even sure she bothered to weigh my bags, though she must have.

We went through to the departure lounge right away so we could have breakfast without rushing. I changed Talitha’s nappy and dressed her for the flight (she was still in pajamas at this point). She ate a gratifyingly big breakfast and was so charming to the people around us that it gave me a confidence boost.

The journey itself went surprisingly well. The biggest hiccup was being sat next to a business man who, though infallibly polite, didn’t seem too impressed with having a baby constantly trying to climb into his lap or use him as a support for walking. I tried talking to her about personal space but when she decided he was as good a place as any to put bits of food she was done with, I’m pretty sure he felt I wasn’t trying hard enough. And that’s not even mentioning her hiding his noise-canceling headphones when he went to the bathroom.

When I told my mother about it, she said: “He musta rell be cussin’ you in his head!” I’m lucky he was British so it was only in his head.

Anyway, apart from that, it all went really smoothly. She even breastfed and napped, two things she almost never does in public and didn’t do last time. We played together lots and all in all it was quite a bonding time. I’d still rather a flight sans child, one where I get to finish watching Salmon Fishing in the Yemen, but all in all, it was doable.

To those who said I was flying with baby who fell in possibly the worst age bracket for this length of journey, I say: maybe with a normal child but mine isn’t normal. She’s actually loads easier to cope with now than she was at six months old (which, incidentally, is the age most people claim is the best for flying). I’m also far more confident in my parenting. I’m more competent too, though my businessman neighbour would probably disagree.

Tips for taking a baby on a plane

Think about where you sit

I was so glad we were near the bulkheads. We didn’t use them for a cot or baby seat though. I hate doing that because there’s no guarantee Talitha will stay there much and it makes it tricky to get in and out of the seat. It’s brilliant for offering that extra bit of space though. I kept one of the bags at my feet and let Talitha play down there with her stacking cups.

Invest in a good quality carrier

I could kiss Born for recommending the ERGObaby to me last time I flew. It’s more than paid for itself. We still use it more than either of our buggies. It makes nipping to the loo a doddle and, as I was on my own, was essential for freeing my hands for hand luggage. It definitely amplified the cute factor with everyone chatting with her because she was at eye-level. I wasn’t expected to take her out of it going through security either, though that would have been simple enough if I had been.

I felt sorry for women struggling with their Baby Björns in the long cues. They kept readjusting their toddlers and themselves, looking uncomfortable. I had Talitha on my front some of the time and my back the rest, feeling completely supported. I also have the little pouch that attaches to the ERGO which was perfect for keeping my valuables close to hand.

Take lots to entertain your baby

We had books, stickers, crayons and stacking cups packed and we used them all. Nine hours is a long time! It was her first time playing with stickers and they apparently looked hilarious on my nose. We also installed a few apps as per Facebook and Twitter suggestions. Baby Silencer and Peekaboo Barn were the clear favourites. I’m a little scared of how well she knows her way around my iPhone.

Take your own food

Talitha had absolutely zero interest in airplane food. I’m so relieved that I’d lots of snacks. Not only did they work as distractions but she seemed hungrier than usual for some reason. I’d also got a cafe to fill her sippy cups with water in the departure lounge which I was glad for because the flight attendants were busy at times when I would have asked for it and she was unusually thirsty.

Nappy changes were so smooth this time. I went with disposables again. I could have done cloth but decided space was an issue. I put nappies, wipes and bags in a Ziploc bag and stuck them with a changing mat in the magazine holder in front of us. So it was just a case of grab and go when we went to the loo.

Thank God she didn’t poo this time. Last time she pooed five times and went through three changes of clothes. A little bit of constipation goes a long way.

I feel it’s time for me to come clean about something. You know how I told you Talitha was walking? It was an entirely premature announcement. She hardly ever does it and never for more than a few steps, nothing like that first time. Basically she’s still crawling everywhere. Judging from the parents across the cabin who had to follow their 17-month-old up and down the plane all day, this is a good thing.

However, she did need to move. So I let her climb me and every now and then we went into the emergency exit area so she could have a proper crawl/cruise. She even got together with the other baby at one point so they could hug, kiss, laugh and play peekaboo together. They laughed at each other across the cabin too, which was particularly sweet.

So, daytime flight down, night time on the way back and some Caribbean flavours to introduce you to in the meantime.

Love from Trinidad and Tobago. x