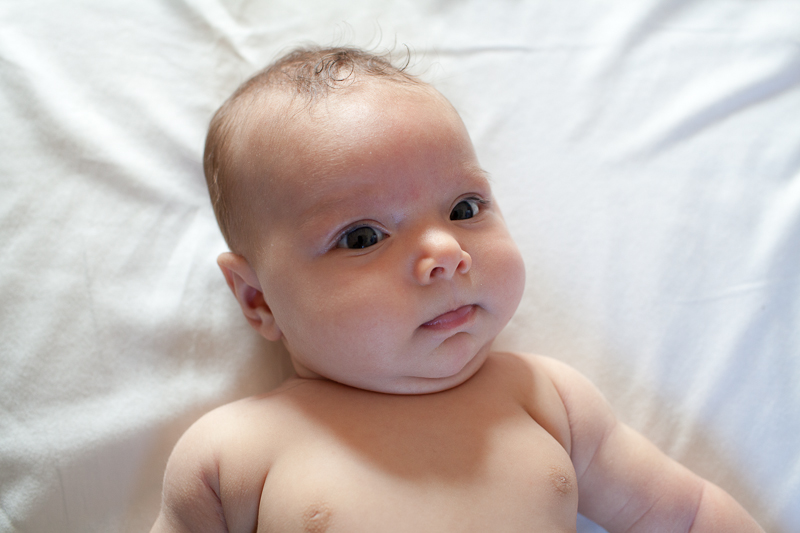 So how’s life with our third baby so far? Ask me again tomorrow. It probably depends on the day.

Delilah turned eight weeks earlier this week and it never stops amazing me how much happens in such a short time with babies. I’m not even just talking about the stuff you expect with a new baby, like the high-speed growth or the suddenly meaningful smiles. Sure, she’s breaking out of her 0-3 month clothes and we’re enjoying more awake time. She’s moved well out of sleepy fetus mode and is now looking like her rather than every other newborn (actually, she looks a lot like Talitha except much chubbier). I look back on this past month and it’s impossible to reflect on time with her in isolation. Every week her presence changes life for our whole family.

The month started off with me being pretty stressed over her eczema. On reflection, she started developing the tell tale rash from week two but I thought it was just baby acne. Then suddenly, it was seriously intense, angry spots and red, rough patches everywhere. I took her to the doctor who gave me a cream. That didn’t help. It seems to be trial and error with eczema. Meanwhile, her poo was coming out in full cappuccino foam and it was hard to imagine that the two might not be linked.

This bothered me more than I’d expect. It seems a bit silly – it was a relatively small thing – but my newborn just didn’t look right. Her skin should be soft to the touch and it wasn’t. I was paranoid that everyone was looking at her wondering what was up. I worried that it would start making her uncomfortable as she got older, if it wasn’t already, since she was starting to pass her hands by her face a lot.

A visit to a kinesiologist threw up the suggestion that it was cow’s milk protein bothering her. In retrospect, she’d become completely covered the day after I’d binged on fancy cheeses. I’d already cut it out and it seemed to be getting better. I’d also started using colloidal oatmeal which was like a miracle cream.

After a few weeks of no cow’s dairy, her poo settled down and her skin was clear. A couple of times, I forgot and ate something with cheese or sour cream in it and later that day, the rough red patches returned, along with an uncomfortable baby. Then, earlier this week, I finished off the girls’ ice creams. Within hours the rash appeared and I spent the evening with a fussy baby whose poos were once again foamy and, for the next 24 hours, green. So, it’s safe to say I’m pretty convinced the cow’s milk is a no-no for the time being. Hopefully she outgrows it.

Meanwhile, life has taken an interesting turn lately with Laurence working in Cornwall for half the working week. We’re both finding this something of an endurance test. For him, it means a lot of driving and staying in different places. For me, the days are long with a newborn, never mind with a two-and-a-half-year old and a five-year-old from wake up to bedtime. This might make some chuckle but I genuinely underestimated how stressful I’d find this. I think I actually forgot when making this arrangement while pregnant what newborns are like and what a juggling act it was making the adjustment from one child to two.

In truth, so far I’m not finding the jump from two to three much more difficult than that last leap. If I had to compare them all, I’d say that zero to one was the hardest in terms of being totally transformative, both because it’s an identity shift becoming a mother and because of Talitha’s specific breastfeeding problems. The jump from one to two meant accepting that not everyone’s needs could be met and that we just had to muddle through as best we could. Two to three really has been just a case of adding another.

That is immensely hard work but the necessary mental shifts have been made and the family framework is already there, if that makes sense. If anything, the difficult bit is psychologically adjusting to being back here again, holding and feeding a tiny baby and rousing at various points in the night.

From a practical point of view, Ophelia still needs lots of holding and cuddling. She’s a much more physical toddler than Talitha was and it’s proving challenging trying to find other ways to meet that need at times when I just can’t put Delilah down or am feeding her. Having said that Ophelia seemed to be weaning, she still asks for a bedtime feed maybe two or three times a week though it generally lasts moments, sometimes more. She’s re-learned how to latch which was a big surprise and has made the whole thing a happier experience for us both. I’ve started offering again and she doesn’t always say yes but she seems to get a lot of comfort from knowing that it’s still available to her. I don’t feel like we’re tandem breastfeeding but I suppose we are.

She’s hit that stage where anything can become a control issue and I’m having to either learn when to let things go or to slow right down and try to understand where she’s coming from. My mantra at the moment is “Respond, don’t react.” Realistically, I’m finding that a struggle to put into practice, especially if they’re both crying at the same time. When that happens, something in my brain goes into panic mode, telling me to run away or throw a tantrum myself. I’m just grateful we haven’t yet had an episode of all three crying at once. I’d probably just join them if that ever did happen.

Having been here before means I know that this won’t last forever. We will all adapt and I will learn how to relate to Ophelia. That doesn’t mean it will suddenly click and all run smoothly, and it won’t be about instant fixes and perfect formulas. It never is. It will be long, slow, gradual and messy. But it’s all about getting to know each other and I’m grateful for the opportunity.

As for Talitha, it’s been tricky finding the time and energy to do the things she wants and needs to do. It’s been a lot of trial and error. Maybe more error than I’m ready to admit to myself. She’s been surprisingly patient but I have needed a lot of the time to just get on with it and stick a crying baby in the car where I might have spent time at home calming her down first. Mostly, we’ve found ways to work around the situation by taking what we’re doing on to the floor, reading while Delilah breastfeeds or naps and making the most of a sling.

It’s not perfect. I do find the millions of questions difficult to deal with in the middle of nappy changes but then I’d struggle with them anyway. There have also been days when they’ve watched more TV than I’d like or I’ve been asked “What can I do?” more times than my sanity can take or when hardly anything gets ticked off our to-do list.

In the scheme of things, though, life is ebb and flow and this time is short. Meanwhile, they’re learning important lessons about waiting for one another, creatively entertaining themselves and spending valuable time together as siblings.