“We need to save the rhinos!” – National Geographic Kids iPad edition 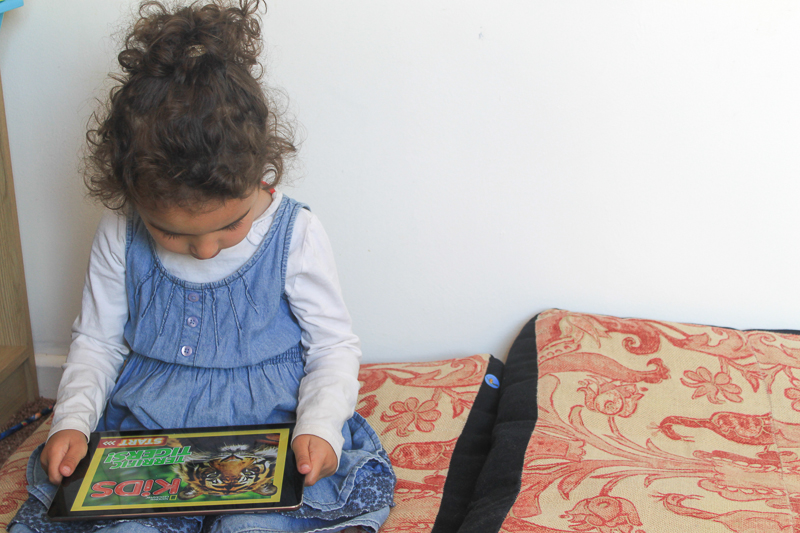 A few days ago, while Talitha and I were making supper, she suddenly said: “Mummy, we need to save the rhinos! People are trying to kill them because they want their horns and that is very bad.” I was surprised, to say the least. “Where did you hear about that?” I asked. She sighed with all the exasperation an almost four-year-old can muster. “It was in the iPad game we were playing the other day.”

The “game” she was talking about was the iPad edition of National Geographic Kids UK magazine. It’s interactive enough that I could see why she called it that. The iPad edition includes videos, sounds and games. Many of the pages include sound effects like animals noises, with touchable features to reveal information.

Honestly, I thought it would be a bit old for Talitha but she was absolutely gripped and insisted we read the whole thing together. She’s not reading independently yet so it wasn’t really something she could get the most out of without me but it made for a lovely time together in our reading nook, while her little sister napped.

Another time (after the rhino talk), she looked through it on her own and I heard her talking to herself, surprising me with how much she remembered from us looking through it. It’s got us talking about a lot of issues I’d previously assumed she was a bit young to understand. I obviously misjudged because she’s been very interested, asking pretty insightful questions about conservation and recycling. I’ve learned quite a bit from it too!

I have previously preferred traditional magazines to app versions but I can really see how it works here. The presentation is cleaner and more engaging, she’s able to look at it if we’re on the go and haven’t thought to bring a magazine (on a train journey for example) and she can look at it without much input from us or it’s something we can look at together.

The only downsides are that the iPad edition is not as intuitive as I’d expect it to be so some things didn’t do what we thought they would but this really was a minor point. As a starting point for exploring topics, it’s another useful tool in the box.

The National Geographic Kids UK app gives a 12-month subscription to the digital edition and is currently available for £20 on the NG Kids website.

Episode 55
“We need to save the rhinos!” – National Geographic Kids iPad edition