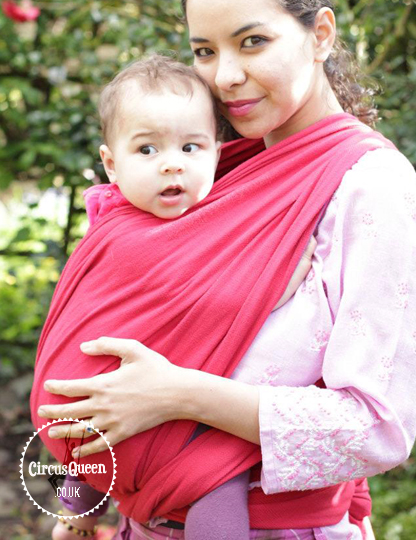 While I know people who’ve worn their babies in stretchy wraps all the way into toddlerhood, I packed mine in when Talitha hit six months. Her weight by then made the fabric uncomfortably bunch up around my shoulders and the more mobile she became the more easily she wrestled her way out.

Having looked into all available options, I’m quite settled that seriously wearing an older baby is best done in either a soft structured carrier or a woven wrap. No other sling or carrier distributes that amount of weight evenly enough for long carries.

But which one? I’m comparing an ERGObaby carrier and a Storchenwiege wrap.

Ease of use
Either of these is potentially intimidating. There is a bit of a learning curve. Before going to a sling meet, I would have said that the ERGO was certainly easier to get your head around. Having had a face-to-face demonstration, though, I find the woven wrap every bit as easy to use.

In fact, in the end it was easier to learn. The ERGO took me a couple of weeks to settle into as I needed to work out the right adjustment of the buckles to avoid all the weight ending up in my thighs. On the other hand, a couple days’ practice with the woven wrap and I had the front carry down, no problem. Laurence just buckles in the with the carrier though and absolutely refuses to try the wrap (even though he was the one to perfect the stretchy wrap first!).

Once you’ve worked it out, it’s pretty difficult to get the ERGO wrong and if you’ve got it wrong, it most likely won’t be so badly that you’ve got to take it off and start again. The woven wrap, on the other hand, must not be twisted (challenging when you’re dealing with that much material), otherwise you end up thinking of nothing else the whole time you wear your baby. It just won’t feel right.

For back carries though, I find the ERGO infinitely quicker to get into place. I also feel less precarious getting it on – a bit less like the baby is going to end up going “Splat!” in the process (I feel like I need to tell you I’m being dramatic. You won’t drop your baby). I still think it’s worth perfecting my back carry with a woven wrap though. Even though I currently find it tricky, I still use it. This comes down to comfort.

For quick put on, take off, though, the ERGO is my pick at the moment. So it’ll be the ERGO again when I do the mental flight to Trinidad in August for the second time.

I’ll start off by saying that both of these are comfortable. They distribute the weight so evenly that I do not feel the full 20-plus pounds of baby on my front or back – and I wear her for hours. Both the woven wrap and the ERGO allow Talitha to sit astride me so her pelvis is supported and their soft structures never dig in.

However, for some reason the woven wrap sits more easily on me. It could be that because I tie it, the fit I get is entirely bespoke to Talitha and me as a unified shape. Generally, when I wear her in the ERGO now, I wear her on my back because if she’s on my front, I tire after a while.

The look
This so depends on who you are. I adore the look of a woven wrap. It’s so pretty. It’s so earth mother. The threads are woven through each other in a pattern that feels both gloriously ancient and modern. If you get the right colour then it’s a brilliant accessory.

Laurence, however, never sure how he felt about being seen in the stretchy wrap, is perfectly happy to have a macho alternative. The belts and buckles of the ERGO feel a bit less femme to him. I totally should have got one printed in flowers.

Price
They’re both painfully expensive, actually. You can get them secondhand but I wouldn’t buy an ERGO off eBay unless I was sure it wasn’t a substandard fake as those get peddled all over the place. They’re every bit worth it though, especially when you compare their prices to the figures you could end up spending on pushchairs should you start collecting those.

Breastfeeding
I could have stuck this in with ease of use but figured it deserved its own category since this is one everyone asks about. Ultimately, I prefer to just sit with Talitha when feeding. She only takes a few minutes these days and it’s a nice opportunity for a rest and a cuddle.

However, if I’m walking home and she can’t wait, I will feed her in the carrier and I’ve found the ERGO and woven wrap equally easy in this respect, with some practice. The woven wrap allows more coverage if I need to hide her from the world so she can concentrate but it needs retying at some point afterwards.

Conclusion: I’m happy with both and as we hope to have another child, I imagine we’ll be glad of owning two competent carriers.