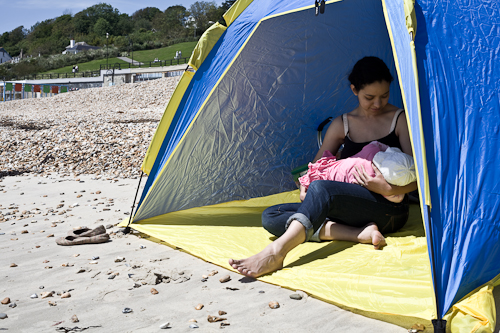 Support. We keep hearing how important it is. Research – and logic – would tell us that most women physically can breastfeed. A lot of the women I’ve met want (or wanted) to. Yet for so many, the story just does not play out that way. Support. It seems to be the missing piece of the puzzle. But what does it even mean?

I finished training to be a breastfeeding peer supporter a couple of months ago and have been volunteering at my local breastfeeding group. My own breastfeeding experience over the past year, my short time spent supporting and other women’s stories have hugely impacted my understanding of what breastfeeding support means and why it’s so valuable to protecting breastfeeding relationships. (See why I think support is so important in Six ways to prepare for breastfeeding)

It’s also given me a pretty clear idea of what it isn’t.

Breastfeeding support isn’t aggressive
Get enough parents in a room and you’re likely to hear at least one story about feeling “bullied into breastfeeding”. It will usually involve the Breast is Best tagline. I cringe whenever I hear that phrase. It may have worked once upon a time but we no longer need to hear a message which idealises breastfeeding (if breast is special then maybe it’s only for some – the rest of us have to make do with formula).

What’s worse, ask the questions “Did you feel listened to? Did you feel empowered with information to make your decision?” and the answer is usually “No.” We have to wonder who benefits from this kind of approach – slating parents if they don’t keep going but then not actually helping them find the solutions to do so.

The problems? They’re often not followed up with suggestions for a plan of action. They’re effectively conversation stoppers. They don’t take into consideration that breastfeeding problems are often time sensitive. Milk supply in the early days and weeks needs to be established or production can be compromised. When mothers are feeling vulnerable, a couple of weeks may be too long to live with uncertainty or physical pain. Read a nail-on-head criticism of the “just try harder” approach in Analytical Armadillo’s The consequences of passive breastfeeding support.

Breastfeeding support isn’t defeatist
If the person supporting you doesn’t believe that breastfeeding usually can work, what you’re receiving is not support. If they make assumptions about you and decide that it’s not worth helping you find the tools to work through any problems you’re having then that’s disempowering. It’s not support. I can only assume that people who offer this kind of support don’t believe there’s a real difference between formula and breastmilk.

There is sometimes a place for formula supplements but why jump to it as a first solution. If a baby is slow to gain weight then shouldn’t the first move to offer more of the mother’s milk and try to work out why they’re not getting enough? If a mother has repeated mastitis shouldn’t there be an answer as to why? Maybe there’s a reason her baby’s not draining her breasts sufficiently? And no, her breasts aren’t “telling her something”. That’s not based on science as far as I can see.

If she decides she’s going to move on, it needs to be fully her decision. She deserves to have all the information so she can make it, instead of having someone else decide for her which option will be the most achievable.

Breastfeeding support isn’t about making claims you can’t back up
I think the reason why “support” can fail mothers in the above ways is that often the people offering it are just not informed enough about breastfeeding. But if you don’t know something, say so! Maybe you don’t have the necessary training. That’s OK. Either agree to do the research or refer the mother to someone who’s done it. What’s not OK is to pass off personal opinions, experiences and parenting ideas as medical advice. This goes for health care practitioners as well as people operating in the breastfeeding support community.

Make sure you know who you’re talking to. What work has your HV, midwife or GP done in this area? What are they basing that suggestion on? Is the person you’re speaking to a peer supporter, a breastfeeding counselor or an International Board Certified Lactation Consultant? Are they simply offering information or are they making a diagnosis that they’re not qualified to give?

Nursing strikes, too much solid food too soon, distraction, teething – there are lots of things that can happen to make it seem a baby has decided to wean but it may be before they’re ready. It’s just important to know that you have options. If the person you’re speaking to doesn’t think your concerns deserve to be addressed because of your baby’s age, that’s not support.

Despite the best of intentions, poor breastfeeding support can be damaging. Fight until you get what you need. Get your partner, mother or friend on side and get them to fight for you if you’re too tired. You shouldn’t have to settle for less.

So tell me, who is your biggest breastfeeding supporter?