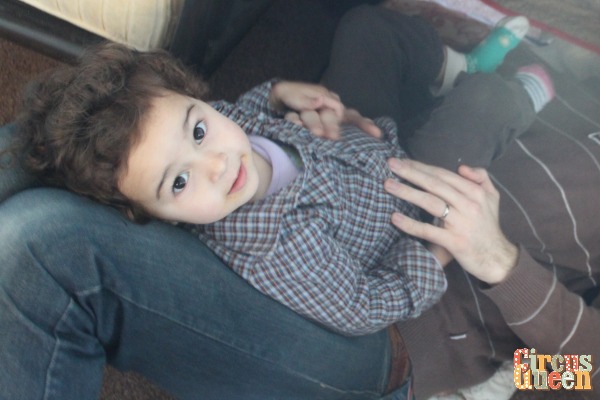 “Talitha, honey, do you see Mummy’s keys anywhere?” I looked held open the letter box, peering through. I was grateful that my two-and-a-half-year-old’s letter box height meant we could have eye contact. She looked around the floor by the door, looked in the living room and came back.

“No. Mummy, open the door, please!” Talitha asked. I knew she sensed my urgency when she used the word “please” unprompted. OK, must stay calm so she stays calm, I thought.

“I need my keys to open the door. It’s OK, darling. Come up the stairs by the window and look in Mummy’s bag.” She did. I turned over a recycling box and stood on it, precariously, trying to look in the window. “It’s not here, Mummy.” She got a bit distracted by the water bottle. Then she looked in the front pocket. Not there either. I began to panic inside.

Keeping my voice as cheerful as possible, I asked if she could look in the kitchen for it. She looked up. It was hanging by the door on the hook. As it should be. “I can’t reach your keys,” she told me what I already knew, “You reach them, Mummy.” My heart sank. She so believed that I could fix this, that I could fix anything. “I can’t reach them, either, honey. It’s OK. I’m going to get some help. You stay here and this nice man will talk to you.”

The ASDA delivery man seemed nervous about the job I’d assigned to him but stooped down to our letter box and got to it. Meanwhile, I went walking up and down our street, knocking on doors, praying that somebody would be in. I was barefoot. Not that I much noticed.

I always put my door on the latch. In fact, it’s so automatic that I often do it without thinking when I’m about to leave and get annoyed with myself when I have to undo it to close the door. This is literally the first time since we moved here seven months ago when I’ve faltered on this. And I was only getting the groceries from the door.

I put my second foot down in the porch when the door shut behind me. Talitha had closed it. Then she realised that I couldn’t open it. And I knew that there was no way she could open it. Only an adult could.

Finally, I found a neighbour who was in. I’d not met her before but she kindly let me in to find Laurence’s work number online and then use her phone to ring him. He agreed to jump in a taxi and come straight home. It would take him fifteen minutes I figured. That sounded OK until I told the delivery guy so. He looked terrified of what fifteen minutes could mean. “She’s a very understanding child,” I reassured him. She’ll stay by the door. She won’t get into trouble.”

He said that he felt awful for me and I could see that he really did. I told him not to worry; it was all sorted now and that he should go as he’d have other deliveries to make. He was reluctant to. He wondered if he should wait with me. It really helped centre me, having someone else there who was concerned rather than judgemental. I assured him that he would be fine and thanked him for having stayed and helped as long as he did.

Meanwhile, Talitha had found the breadsticks in the shopping that had got in before the ill-fated closing of the door. She passed them to me through the letter box. I opened them and passed them back. Thank you, Lord, I thought. Snacks would help distract her. She sat on the steps and we spent the time chatting through the letter box. “Daddy is on his way,” I said brightly, “He’s bringing keys and he’ll open the door!”

She was mostly calm but every now and then asked me to open the door and told me that she couldn’t reach my keys. At one point, she urgently told me that she wanted me to come inside the house. So, I suggested we pray about it and she agreed. “Dear Lord,” I said, “Please help us to know that we are safe and You are with us. Please bring Daddy home quickly and safely so he can open this door. Amen.” She repeated the “Amen” and then started showing me the chewed up food on her tongue and grinning. Not distressed then.

It felt like it took forever for Laurence to get back. I turned at every car. But he got back and all was well. We got in and I hugged her tightly. She didn’t even seem that bothered, to be honest! I guess, she took my word for it that what I said would happen, would happen.

She did keep talking about it later, though, so I figured that on some level she might be worrying that it could happen again and perhaps she needed to debrief it. So I suggested we thank God for looking after us which she was well up for. Then she seemed able to completely put the whole thing behind her and was more interested in supper and bedtime.

My own thoughts were in overdrive. What if it had been the baby? What if I had had to leave for help and there’d been no one left to talk to Talitha? I locked myself out in our backyard once when Talitha was a newborn. Thankfully, she was in my sling, it was summer and I was breastfeeding. I was barefoot then too! Our landlords also lived next door so I scaled a fence (not a safety-tested babywearing manoeuvre) and waited in their backyard until they got home.

While the neighbour had been searching for Laurence’s work number, I said, “This may be the worst thing I’ve done in the whole of my motherhood!”. She smiled and said, “You’re doing OK.”