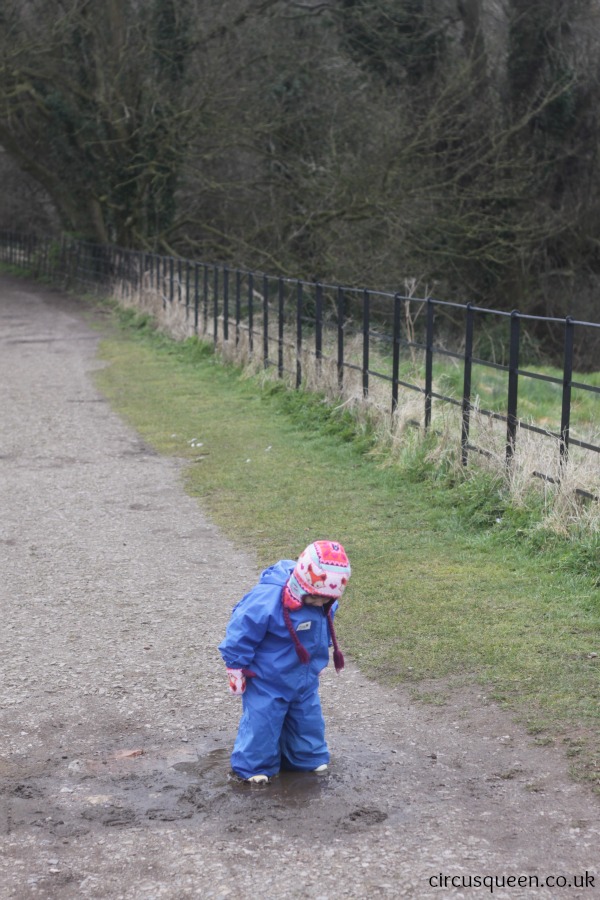 This weekend I turned twenty-seven. I joke with Laurence that thirty is staring me in the face. He rolls his eyes.

It started with a search of puddles around Kings Weston House in north Bristol, suited up for the weather with British determination – in pursuit of natural childhood and all that.

Talitha’s Muddy Puddles suit is a size too big to make sure it lasts and I think it makes her look like the naughty child from Willie Wonka who eats the untested sweet, blows up like a giant blueberry and is taken away by Oompa Loompas to be juiced.

We had our first date in a couple of months, heading to The Rummer down by St Nicholas’ Market. It’s a classy cocktail bar, reportedly with the largest collection of spirits in Bristol or the South-West or the land or something. The atmosphere was chilled out (you have to pre-book, so it’s not the kind of place that gets jam packed) and the menu read like a who’s who of Caribbean countries. I settled on a “Lost in Plantation”, boasting touches from Trinidad (but of course!) and Barbados. Laurence went for an Old Fashioned aka one complicated drink.

Laurence had booked a table for dinner so, after our drink, we descended into the cave. It was quiet, intimate and dark enough to make it impossible for me to get a reasonable picture of him with the iPhone. I had rabbit for the first time and we shared the loveliest scallops I’ve ever had. I’m by no means a connoisseur though. A couple of glasses of red wine later and I had officially drunk more than I have in years.

Like students we took the night bus home. Unlike students, we resisted chips and headed home at the all too reasonable hour of not even midnight – actually, not even 11pm! Cuh-ray-zee.

We got to thinking, though, that we’d like to do this more often, especially as Talitha’s that bit older. It’s easy to get sucked into our own activities at night time, be that photo editing, reading, housework or, worse, television, and soon the week’s passed without much “quality time” spent. Go to bed, rinse and repeat. The proverbial “date night” wants reviving, as cheesy as that sounds.

For the actual birthday, I made a polenta and chocolate cake. We’re trying to eat gluten-free due to intolerance, which has led me to get creative about this stuff. This concoction is from my own head though. Jaw off the floor! I’m so proud of it, come back for the recipe tomorrow.

In that vein, Laurence got me a Magimix for my birthday. It’s a fancy food processor, in case you’re not familiar with it. Sexy. My dad calls it a “Barefoot and Pregnant” present. Actually, it’s something I’ve really wanted for a long time and is pretty much going to guarantee more food blogging round these parts so you’re welcome or so sorry, depending on how you feel about that.

To be honest, I’ve not thought much about my birthday. I wondered if it might be a touch of denial but I’m not really bothered about growing older. If anything, I see the benefit in it. What I say carries more weight and as time goes by, I learn to become more content with what we do or don’t have. I think my birthday went on the back burner because I’ve been so absorbed with what to do for Talitha’s second birthday. In fact, my turning twenty-seven just signifies to me that she’s turning two.

I took a moment last night to reflect on it all (while watching the World’s Biggest Snake on More 4 so not quite so lofty) and realised just how thankful I am for everything I’ve been given and how that motivates me to give more this year, whatever that translates into. Twenty-seven. So grown up. Almost thirty.