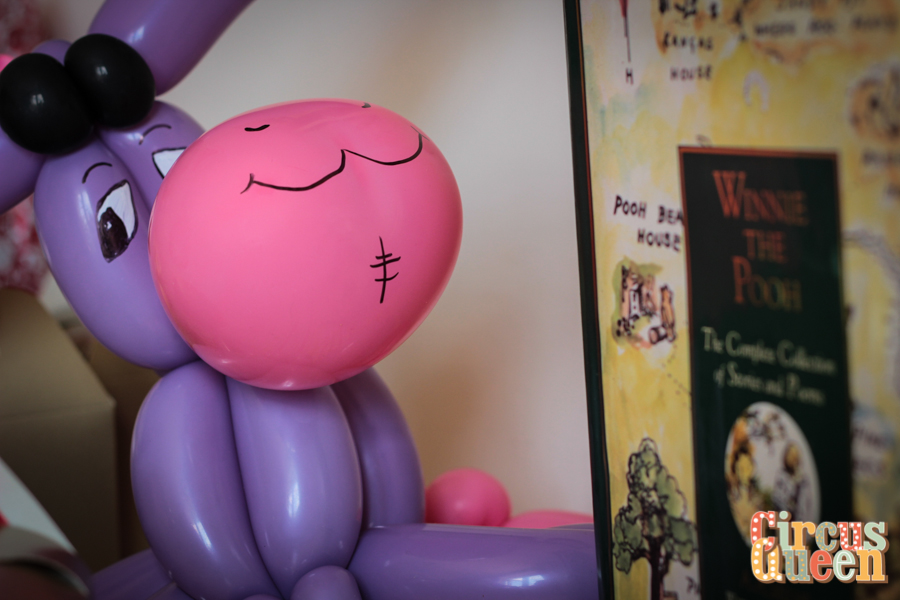 Talitha turned three last month and, after flitting from Gruffalo to angel to dinosaur themes, she settled on a Winnie the Pooh birthday party. This was the first year she understood birthdays, so it was exciting all round.

Our friend Helen, from Cat’s Whiskers Face Painting in Bristol, generously offered the main attraction. I’ve honestly never seen anything quite like it – she was so quick and accurate. She also made the amazing Eeyore balloon pictured above.

I grabbed some printables off Disney and Disney Baby to make a colouring wall and stickers for the party bags and snack boxes. The printable for the Winnie the Pooh Happy Birthday banner is from Peonies & Poppy Seeds.

A few finishing touches came from charity shop bits and a heck of a lot of balloons, mostly blown up by my father-in-law.

We put our camping tent up in the garden with a paddling pool and a couple hundred ball pit balls. The idea was that there’d still be a doable outdoor activity should it rain.

As it happened, it was ridiculously sunny and after sitting in there to moderate a game of pass the parcel, I have no idea how they managed to spend so much time in it! It was boiling.

Talitha was holding on to the promise of a Winnie the Pooh cake. I almost lost my mind making her a Hungry Caterpillar cake last year and that was just for the family! So I considered buying a printed rice paper topper or just putting a little figurine on top. In the end, I decided to bite the bullet, taking this pin for inspiration.

The day before, I was cursing myself for a dodgy bake job and an icing disaster in the making but it somehow worked in the end. It happens that we’ll overlook most things with copious amounts of royal icing. And, actually, the gluten-free, dairy-free lemon experiment beneath the icing turned out so well I’ll be making it again.

Thanks so much to all the family and friends who came and made Talitha’s third birthday party the celebration we’d hoped it would be. It is so precious having you in our lives.

PS: Thanks to my bro and Laurence for taking these photos. I was a bit preocupied…